Can one safely mount an 8" blade in a 10" saw if the arbor sizes are compatible?

I am looking to pick up a new cabinet saw. I have currently two table saws, a 10" and an 8". I use the 8" with a Freud SBOX8 box-joint blade and pretty much use that saw exclusively for box joints.

I'm wondering if I pick up a 10" cabinet saw, is it possible, given same size arbors, that I could run the 8" blade in the 10" saw or is there some danger I am not considering?

As long as the hole in the blade is the same size as the arbor, you can mount any blade with a diameter smaller than the maximum your saw can use.*

The only real difference, besides maximum cutting depth, is that smaller blades are often thinner and have a narrower kerf. I was curious if this could make them unsafe to run at the same speed as a larger blade, but actually the opposite is true. 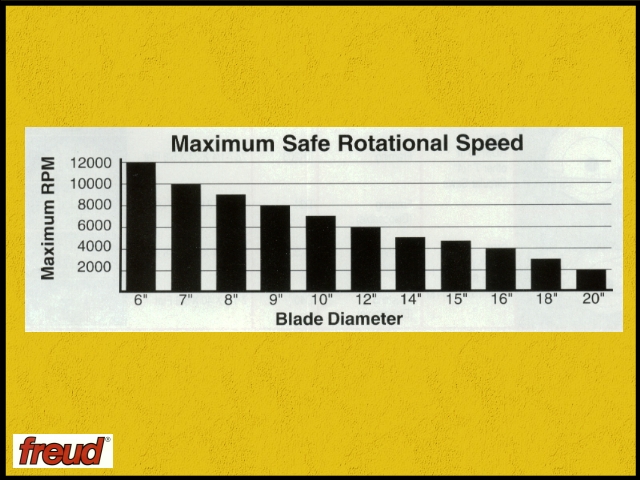 Smaller blades can run faster since their mass is closer to the axis of rotation (I think), so they can be made thinner. But, the RPM of a smaller blade will be the same as that of a larger blade, and in fact the cutting edge will be moving slower. In other words: the blade isn't in danger.

One thing to note is that an identical cut should probably be made slower with a smaller blade, since the cutting edge of the blade is moving slower.

More specifically to your situation: The manual for the SBOX8 doesn't even mention the table saw's maximum blade size, which leads me to believe it isn't an issue. Also the SBOX8 is probably heavier than a normal 10" blade, so much of the general information above doesn't apply.

* Although it must be larger than the arbor flange, and large enough to cut things!

As RatchetFreak pointed out, you'd have to dismount the riving knife, which is a useful piece of safety equipment.

On the other hand, if you're just talking about box joints, that's a short, well-supported cut without much risk of the blade being pinched. Be careful about the risk of kickback from the top/back of the blade, but i think you'd be ok.

Note that it's common to run 8" dado sets on 10" saws, and those can't use riving knives either. Of course a dado buried in an aux fence has no blade-pinch risk... but i think it's fair to consider a box joint to be many narrow mid-panel dadoes.

Not the answer you're looking for? Browse other questions tagged safety table-saw or ask your own question.

9
Would a thick riving knife be useful with a dado stack?
1
10 inch blade instead of 12 in

29
What is the recommended height of the blade on a table saw while operating?
13
What is the hook angle on a saw blade?
11
Can I really use my table saw as a disc sander?
2
How can I stop wobbling after installing a table saw blade
13
4'x8' length cut - circular saw, table saw, or panel saw?
2
How can I safely cut this thin stock with a small angle on a right tilting table saw?
1
Table saw blade wobbles, don't think it's the arbor
3
Table saw setup - calibration?
1
What's the impact of blade RPM on a table saw?