How to remove a heavy wire-brushed finish?

I bought a (solid) 32x70in white oak dining table that has a pretty heavily wire-brushed finish, something like: 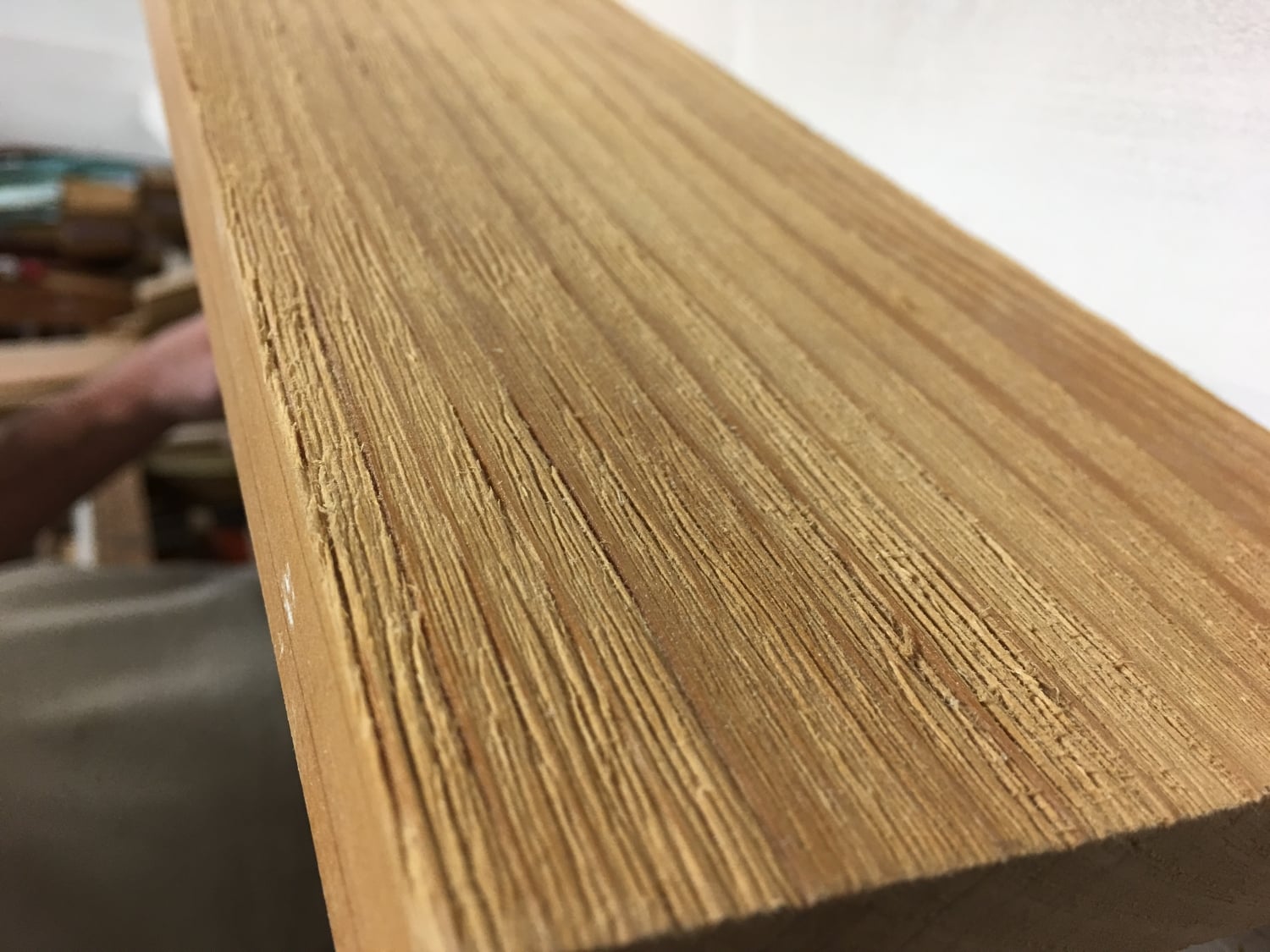 The crevices extend over 1mm below the surface.

It's really quite impractical as food/liquid bits get stuck in the grooves and I want to remove it and refinish. I'm wondering what the best way to do so is.

I have a cheap random orbital sander but feels like it might take forever. Open to upgrading my ROS (maybe getting a geared one like a Rotex), getting a belt sander (feels a bit one-time use and risky), or a larger hand plane.

Would love to hear what you guys think the easiest or most sensible approach is here!

No car and live in the city so a bit impractical to haul it to a cabinet maker and ask them to sand it down.

Edit: actual picture of the table: 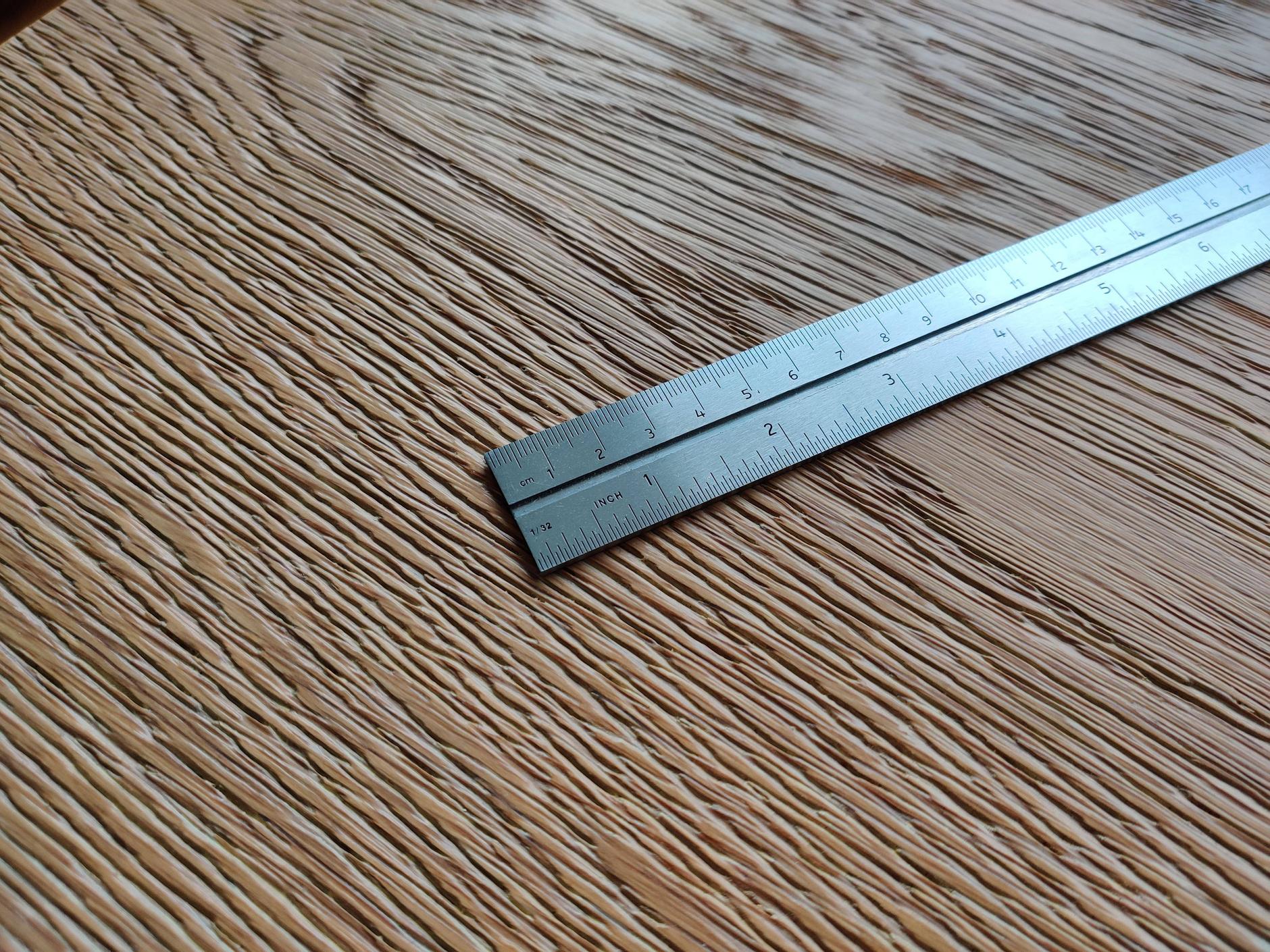 ROSs are finish sanders, and not well suited to bulk material removal (except for beasts like the Rotex). But of course you can fit a coarse disk — and I mean really coarse1 — to any ROS to make it very aggressive.

But maintaining flatness when removing this much material with a rotary sander is not easy..... I'm actually doubtful a dead-flat surface is actually achievable this way.

Belt sanders are more well suited to removing this much wood, but again they're not exactly built for achieving large flat surfaces. Although there are some strategies for helping to maintain/achieve this2 even users familiar with their belt sanders talk about it being challenging.

Router
In the absence of a wide-belt sander that can do the whole tabletop in single passes the ideal way to do this is probably using a router sled. Router sleds are very well covered online so if you have zero familiarity with them you'll have no trouble getting up to speed. Here is a previous Answer that gives an introduction; the links may have gone stale now since this is from 2016, but you'll be able to re-find the same content easily enough.

Hand planes
You can do this kind of thing via hand planing, same as had to be done with riven boards in the past which would be approximately this rough.

Not gonna lie, this requires a fair bit of sweat equity but not quite as much as one might imagine if the proper methodology, i.e. traditional practice, is adopted. Space doesn't allow for a full description of the process, but you'd begin with a plane set up for hogging off lots of wood3 and use it in traversing passes (wood puts up much less resistance when you plane across it) until the surface is flat-ish, then switch to a jointer to flatten off, then smoothing plane if needed, followed by whatever finishing steps you favour.

Obviously the above does require at least three planes, and some familiarity with using them.

Alternatively, fill
You could fill the texture. This can be done using a pore/grain filler naturally, but you can also do it entirely with a clear finish. If your tabletop is as rough as the one you linked to you'll still need to do a fair bit of sanding naturally, but you'd only be removing a fraction of the wood you'd have to otherwise.

Neither method may give you exactly the look you'd prefer, but they are a lot less work overall and the flatness of the final surface is much more assured.

2 Working across two diagonals, followed by along-the-grain passes. Also you can fit or make a sled to a belt sander to help prevent it diving in.

3 A roughing/scrub plane, a fore plane set up the traditional way, or a jack plane set up as a 'roughing jack'.

That is deep enough for a planer machine, assuming it is not veneer. At one time I did some planning by taking a high school night school class in woodworking. That may give you some ideas regarding where you might get use of a machine . Otherwise that is a lot of material to remove with a big belt sander.

Not the answer you're looking for? Browse other questions tagged sanding power-tools refinishing hand-planing or ask your own question.

3
Flattening the face of a board without using a jointer

5
How to re-finish solid oak cabinets?
7
How heavy a piece of wood can my lathe handle?
1
Hemlock dining room table finish
4
Problem with "Bubbles" in Table Finish
5
My contractor sanded our plywood seating... Is there any way to fix the finish?
5
How to remove finish on T&G solid wood pine paneling on walls?
1
How to remove paint in dent of guitar
3
Remove old oil stains from oak table before refinishing
4
How to find replacement body paint for Record #07 handplane
2
Sanding residue - how best to remove?