How do I secure wheels to a workbench?

As part of my building of a workbench as referenced in this meta post, I attached some wheels to the bottom of the bench by securing some 2x4x4 blocks to the corner of each foot. Over time, the wheels sagged and eventually one of the blocks ripped out, as I'd just used screws to hold the wooden wheel mount in place.

When one is attaching wheels to a heavy piece of furniture (like a workbench), what are some methods one can use to ensure the wheels remain stable?

One of the problems with putting wheels on a work bench, is it often isn't stable enough for some of the stuff we do on the bench (hand planing for instance). Rockler has a set of workbench casters that lock down to allow the bench to roll, but then can be popped up to put the bench back on its own legs for stability. 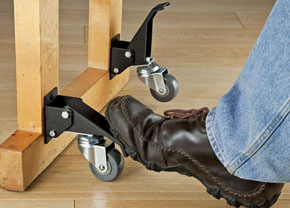 I would use bolts, if I remember correctly I used bolts to attach wheels to my table/cart that I made, 12-14 years ago and they are still going fine. I attached them to 2x4's that were a part of the lower frame structure.

They don't need to be real big, but by having the bolt go though something (with a good washer on either end) you can prevent the 'easy' tearout that can happen with screws or nails. Screws only hold as well as the wood their blade digs into and will slowly work their way out, ripping the wood over time. The bolt, the wood or the wheel has to snap for the bolt not to work.

It depends on the wheels and load, and without more information on what exactly failed (wood? Screws? Wheel?) it will be hard to give you an answer specific to your problem.

When I built my large worktable, I had 4x4 posts as legs, but they were still too small for the 500lb rated load wheels I wanted to use, so added 2x4's wrapped around the legs to end up with, essentially, 7x7 lumber ends. With glue and screws, it provided plenty of stable surface to use 3" (7.5cm) lag bolts. When the wheels are locked, the table is very strong and stable, and when unlocked it moves easily despite its weight and size.

However, looking at how the table is designed, I believe the main issue is that you are screwing into the endgrain of the wood. Screws don't hold very well into endgrain. So I suggest you attach a 2x4x4 to the leg, with the endgrain parallel to the floor (horizontal). Now you have two 2x4's next to each other - close to a 4x4. One presenting end grain to the floor, the other presenting cross grain to the floor.

Now attach another 2x4x4 flat to the bottom of the leg. You can use screws to go from this flat plate to the cross grain piece without special techniques. Screwing the end leg board to the plate, though, should either use pocket holes from the end grain presenting board into the plate, or using angled screws in either direction (plate to leg, or leg to plate) so that the screw threads have something to grab.

Then choose the largest screws that still fit through the wheels of at least 2" length (throw away the screws that came with the wheels - they aren't going to hold the load) and screw them into the 2x4x4 plate you just attached. Depending on the size and location, you may want to pre-drill holes to avoid splitting.

Also, make sure your wheels are up to the expected loads. You may buy four 100LB (45kg) rated wheels, and assume your table will never support more than 400LB (180kg) of load, but keep in mind that wheel ratings are meant for load directly down, and you'll be placing a lot of dynamic and side loads on the work surface. Depending on your planing direction and the load on the table you could be placing well over 200LB loads on a single wheel. Drop a 100lb object on the table near the corner and the sudden force will certainly exceed 100LB for the wheel underneath. Keep this in mind when choosing wheels.

Support the bolt that you're using as an axle on both sides. In other words, don't cantilever the wheels.

This will reduce the moment the bolt is applying to the wooden frame to effectively zero (it takes its "leverage" away). 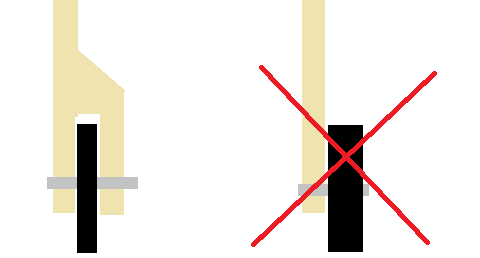 I would not rely on just common wood screws to hold something heavy... lag bolts with washers can be used the same way but they will bite into more wood and be less likely to be pulled out..

Not the answer you're looking for? Browse other questions tagged workbench community-project stability or ask your own question.

3
Is there a workbench “type” reference?
2
Help me fix mistake — twin screw vise spacing runs screws into table legs
4
Need help understanding workbench design and build process
1
Two piece workbench top
4
Need Advice on Building Workbench
2
Workbench better against or away from the wall?
4
What supports do legs need on a very short workbench
1
Does a door make a reasonable workbench top?
1
Is this desk structurally secure?