Will a beam of laminated boards be stronger when the members are vertical or horizontal?

I'm planning construction of a simple gymnastics balance beam which will be 12' long x 4" wide x 4+" deep. Based on various plans found online, I've purchased 6x 1x6 pine boards which I'll laminate to gain the dimensions I need. They're mostly straight, but I'll have to cut them down a bit in order to even the edges after laminating, which I expect will leave me with 4-5" in one dimension.

I'm aware that e.g. floor joists are installed vertically to maximize stiffness, but if the joined width of this beam ends up equal to the depth, would it sag least when the boards are in a horizontal or vertical orientation?

Mechanical engineer here. The answer is it depends. The glue strength, wood strength, and beam dimensions will all play a factor in determining which orientation is stronger.

You'll often hear that the wood will fail prior to the glue failing, which is true for stress perpendicular to the grain. Eastern White Pine's cross-grain modulus is a mere 2,100 kPa.

Beam stress is calculated by moment (torque) on a beam section, multiplied by the distance from the neutral axis (center of beam for a rectangle), and divided by the cross sectional moment of area, "I". For a point load at the center of a simply supported beam (person of weight "W" in the middle of a balance beam of length "L"), the maximum moment will be 1/4*W*L.

However, your stress at the bottom laminate surface (one board thickness up) will be 1,790 kPa, which is only a safety factor of 15, since the glue strength is the new weak point. I took a bit more time to research glulam properties (PDF), (after reading LeeG's answer) and thought about it some more, and realized I had oversimplified the problem. Wood is anisotropic with many defects, and the grain isn't always parallel to the board length. I also didn't account for the lumber and the glue to have different moduli of elasticity, which could allow one to stretch a bit and the other to take up some of the stress.

Glulam beams can also use stronger or flaw-free boards on the top and bottom (where the highest stresses are) to increase the overall beam capacity. A good analogy would be an I beam, with the web in the center mainly dealing with only shear loading. I also suspect glulam beams are laid up face to face, since it's much cheaper to use many narrow boards than a few very wide boards oriented vertically.

For the other option, turn the beam on its side, with the boards standing on edge, and the strength of the glue is no longer a factor. It merely holds the boards together for an additive effect from width, not a square effect from thickness. This puts less critical dependency on your glue up technique and the glue strength. Plus, it will be 5.5" thick, and 4.5" wide, which will be even stronger in bending.

So since you're dealing with a beam that's roughly the same dimensions in width and height (a big plus is the ~1" extra in thickness gained by standing them on edge), the boards you're using are all the same grade of lumber (I assume), and you may or may not have flaws in your glue up technique (no one's perfect), I'd stick with standing the boards on edge and gluing them side by side.

TL;DR: For this application, laminate boards standing on their edges, because science.

It shouldn't matter. A 4x4 is just as strong with either side facing up. If properly glued and clamped, the glue joints on a long grain to long grain joint will be stronger than the wood itself, thus effectively creating a 4x4. 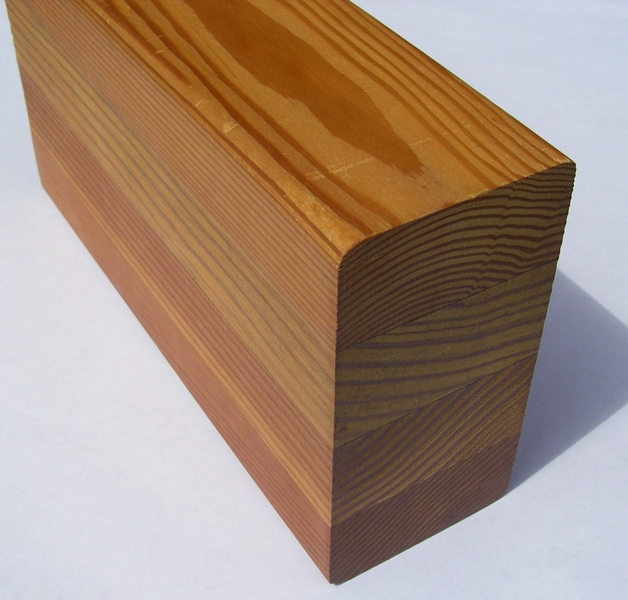 I'm aware that e.g. floor joists are installed vertically to maximize stiffness, but if the joined width of this beam ends up equal to the depth, would it sag least when the boards are in a horizontal or vertical orientation?

The same rule as applies to floor joists still applies on a glued-up member such as this and it should be stiffer if the boards are aligned vertically.

Simple laminations of thin stock would appear to prove this, since the finished glue-up can remain flexible in one direction while being extremely stiff and unyielding in the other.

The strength of a board is in it's dimensions. A 2 by 12 is definitely going to be stronger being vertical, because it is 12" of wood vs. 2" if it were flat.

So when you are done (assuming a good job laminating), which ever dimension is the wider should be the stronger. If you just use nails and screws to put it together then I would keep the lamination's vertical since you have discrete fail points and nails are designed for shearing strength.

Not the answer you're looking for? Browse other questions tagged glue or ask your own question.

7
What are advantages of hide glue and when should I use it?
4
What are the applications for polyurethane glue?
11
What is the benefit to gluing boards together instead of buying a thicker board?
6
What are the different types/grades of wood glue?
0
When working with polyurethane glue, how long does one have to clamp the components?
1
What would be the best glue to use for papermaking frames that are immersed in water & made from pinewood