What are the advantages of coping a joint vs. mitering?

I've generally mitered joints and very rarely coped them in trim or molding, and have been able to achieve an appearance I was satisfied with.

But "traditionally," coped joints seem to have been the norm. Even in my 1970's house there are plenty of examples of coped joints in baseboard (skirting board) and some were done in the 90s. So even in the era of power miter boxes the people who did that work felt coping was a better choice. But personally I'm not sure what the rationale for that actually is.

(Coping clearly could be useful in a retrofit situation, matching up a new piece against something existing without disturbing what is already there. But I'm thinking more of a situation where you are joining two new components.)

Also, just for the sake of argument, assume that the skill of the woodworking / carpenter is good enough to create a good joint either way. I'm interested more in the inherent advantages of either approach.

Just for clarity, its a joint of this general type I'm thinking of: 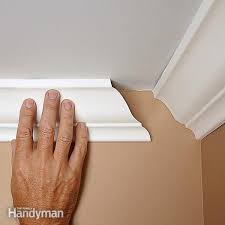 The obvious positive answer with mitered joints is 'speed'. You set the miter to the correct angle (generally 45 degrees for most corners, and cut. And in theory you put them both in the corner and you have a nice joint.

I say in theory, because I always have issues with my mitered joins being 'close' and thankfully mostly 'close enough'. But many homes the walls are not straight nor corners a perfect 90 degrees etc. This is where coping will shine.

Coping will take some more time, but the joint can always be perfect (with a little patience) because you are cutting it to fit for the actual site, not the 'ideal' site. in a corner you have 3 flat(ish) surfaces intersecting ideally at 90 degrees, but surprisingly often there are anomalies. Coping allows you to account for each individually, so you will have a beautiful joint that would take quite a bit of shifting of the walls or ceiling (or floor) to actually mess with the joint.

So the older the house or shoddier the original construction, the more likely coping will make the finishing touches shine. You can even cope the long sides of the trim when you have undulating floors or ceilings, to get a tighter fit.

Not the answer you're looking for? Browse other questions tagged joinery miter-joint butt-joint or ask your own question.