How do I prepare a scraper for use?

In this answer LeeG talks about that a scraper needs to be burnished and sharpened.

How does one do that?

This will deal with sharpening a flat scraper. Curved scrapers follow the same principle, but I don't personally have any experience with them.

First, you need to flatten the edge. I sandwich the scraper between two pieces of wood in my vise with perhaps 1/2" of the edge standing proud. Use a mill bastard file that is 2-3" longer than your scraper, and holding it flat against the edge of the scraper, file down the scraper so it is flat along the edge, with no burrs. It is important that the edge be flat, so make some sort of jig to hold the file flat. 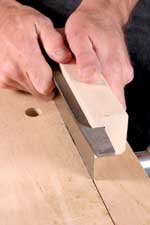 If you want the sharpest, longest lasting edge, you can use a stone (water or oil) to further polish the edge. Remove the scraper from the vise, and using a block of wood to hold it vertical, polish the edge to about 5000 grit.

Once the edge is flat, you need to remove the burr and polish the edges with a stone. You can polish the entire edge of the scraper, or use the "ruler trick", placing a steel ruler along the length of the stone, and using it to only allow the flat edge of the scraper to be touched by the stone. Either way, work both sides until there is no burr.

To finalize, you need to draw out an edge and "turn the hook". Veritas makes a jig that will do both or you can do it with a burnisher. A burnisher is a smooth, hard piece of steel, usually, but not always, round. First draw out the edge by laying the scraper on its side on the bench with about 1/2" standing proud. Put a drop of machine oil on the burnisher, and stroke it across the scraper several times until a burr begins to form. You don't need to press hard - about as hard as when putting butter on bread.

Once an edge has been formed, put the scraper back in the vise, and holding the burnisher at about a 5 degree angle, take a few strokes to roll the edge over. The scraper should now be ready for use. Once it gets dull, you can repeat the "draw and turn hook" steps several times before needing to flatten the scraper again. 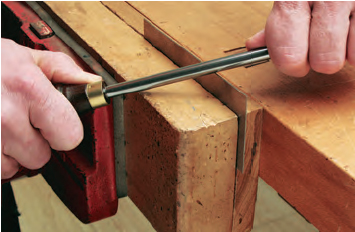 Some other links to sharpening scrapers:

Chris Schwartz at Popular Woodworking has a great article.

Another great article about scrapers and their use is here.

Many videos exist on YouTube that provide tutorials; my favorite is one done by William Ng [via The Wood Whisperer]. They all have the same steps: file the edge, perhaps hone the edge with a stone, and turn the burr over with a burnisher.

The problem is: after having watched them all, I still cannot do it well at all. I have never really been able to curl up a shaving like they do in the videos.

I am hopeful that someone here will provide the magic bullet we all need to make it happen reliably.

Not the answer you're looking for? Browse other questions tagged sharpening cabinet-scraper or ask your own question.

18
What are the differences between sanding and scraping?

6
How do you use a 300 & 600 grit diamond jointer / planer blade sharpener / knife hone holder?
18
What are the differences between sanding and scraping?
7
What are Rockwell points?
6
Bench grinder, tool sharpener or sharpening stone?
6
How long does it take to sharpen a saw blade?
2
To prepare SPF (spruce/pine/fir) tabletop before a finish: should I use scraping, planing, or sanding?
2
How often should I sharpen?
4
Lathes and cutting machines: sharpness versus hardness
1
Unable to sharpen cabinet/card scraper