I have a desktop that I recently glued up that cupped. I was planning on hand planing the table top flat but want to be certain its not too cupped. When I balance a jointed board on the table top (see picture, I will pick up a longer straight edge before planing) the worst gap is about 3/32". This picture shows the underside of the panel.

The desktop is made out of 1" cherry and the desk will be cut to 30"x60". The boards were at final thickness when I glued up. I have dominos every 8-10". There doesn't appear to be any noticeable bow. The table top will be attached to the leg assemblies with expansion washers, so I'm not planning on that generating a lot of force to pull it flat. The panel has been stable over the last week or so without any more noticeable movement.

Is this too cupped to simply plane to flat? Any pointers on the approach if planing is viable?

Edit: What about routing grooves to fit 2-3 pieces of c-channel to pull the desktop flat?

The warping is almost certainly from using plan-sawn lumber and failing to alternate grain direction on 3 of 4 boards because of the faces I wanted showing on the desk top. 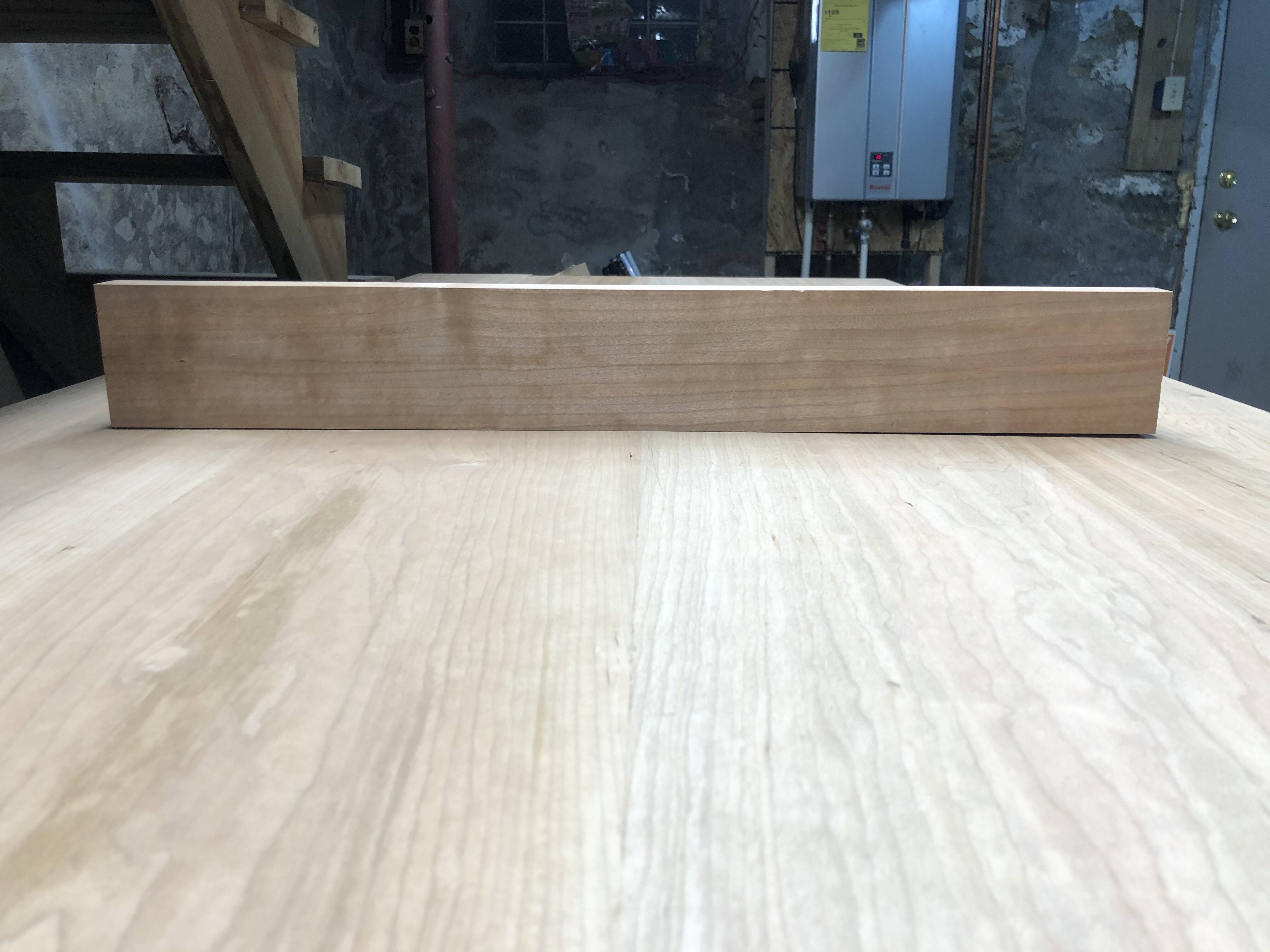 Is this too cupped to simply plane to flat?

Not at all. Obviously you want the top a given thickness, that's why you used the boards that you did. But it doesn't have to be that exact thickness to function. And when planing by hand or by machine it's not uncommon to encounter some tricky grain that leads to unexpected tearout, where subsequently material needs to be removed to fix this (if you can't live with it).

So how thick a top, or panel, needs to be can be determined by circumstance to some degree. If you absolutely had to you could take this down by half without it being too much effort1, although of course you want to remove as little as necessary.

Any pointers on the approach if planing is viable?

Generally if you want to remove a lot of material by hand planing you traverse first — go straight across or on the diagonal2 — then go along the grain taking a lighter cut with the same plane to flatten further, finishing flattening with a jointer or other long plane (a long plane is not absolutely necessary for this, just desirable).

Planing is completed using a smoother of course. But note that it is not common in Western woodworking for the smoothing plane to be the last thing to touch the surface. While it's great if you can finish-plane things some scraping and/or sanding is absolutely routine and perfectly acceptable to achieve a finished surface.

Edit: What about routing grooves to fit 2-3 pieces of c-channel to pull the desktop flat?

You could do that but a wood-only solution of long standing is to install battens on the underside and screw it firmly to those. Presumably these would be hidden by the apron so although more clunky and plainly visible if you go underneath the table they won't change the aesthetics to the day-to-day observer. Note: either way, some of the screws have to be installed in slots to allow for movement. Generally you use a simple clearance hole in the centre and two elongated holes outside of this, but you can work outwards from one edge if you prefer3. See previous Answer, which also includes the gulp solution to this problem.

Another woodworker solution, one often used historically for example on drawing boards and draughting tables to help prevent bowing, would be to have the battens slide into dovetailed grooves which removes the need for screws — the dovetailed battens are slid in dry, or glued at one end only.

Preventing this in future
Obviously the first step here is to ensure your edges are jointed perfect square (or at complementary angles that cancel each other out) as you indicate you did. After that it becomes a clamping issue.

The usual advice for this is to use the same number of clamps top and bottom to balance out the tendency of clamps to induce a bow, although fewer clamps across the width and two or more cauls can also ensure a glue-up ends up nice and flat. See early Answer from here.

1 Using a scrub plane or other roughing plane (a fore, or a 'roughing jack').

2 Often both diagonals which helps to maintain, or establish, flatness.

3 An approach taken for attaching demi-lune and other hall tables where you want the back edge to remain in a fixed positio, so any contraction or expansion in the top leads to the front edge only moving in and out (see image bottom of this Answer).

13
What is a good way to prevent jointed tabletops from bowing when tightening fasteners or the glue sets?
17
What general considerations do I need to take into account for wood movement?
9
Stabilizer for softwood tabletop that bows

15
How can I minimize warp due to wood movement when gluing up a panel?
5
Tips for planing huge panels of joined wood
4
Grooved bar counter top
1
Attaching t-slotted channel to the underside of a desk top
8
Panel Flatness During Table Top Glue Up
6
Glue-up for butcher block-style countertop
3
DIY Desk - Pipe Z-Frame dimensions issue
1
Leaving floating space for a panel - do I need to center the panel?
1
Solutions to stop a glued up panel from flexing