Miters on window casings shrank with cold weather. How do I fix this?

Last winter I started replacing the casings on the doors and windows in my house and have continued this off and on over the summer and fall. When the weather turned colder this fall, the miters on all the casings I completed in the warm weather opened up. (See below photo). The ones I made last winter are fine, as are those on interior doors regardless of when they were put together, so I’m pretty sure this has to do with wood contraction in the cold.

Also, what could I have done to prevent this in the first place? 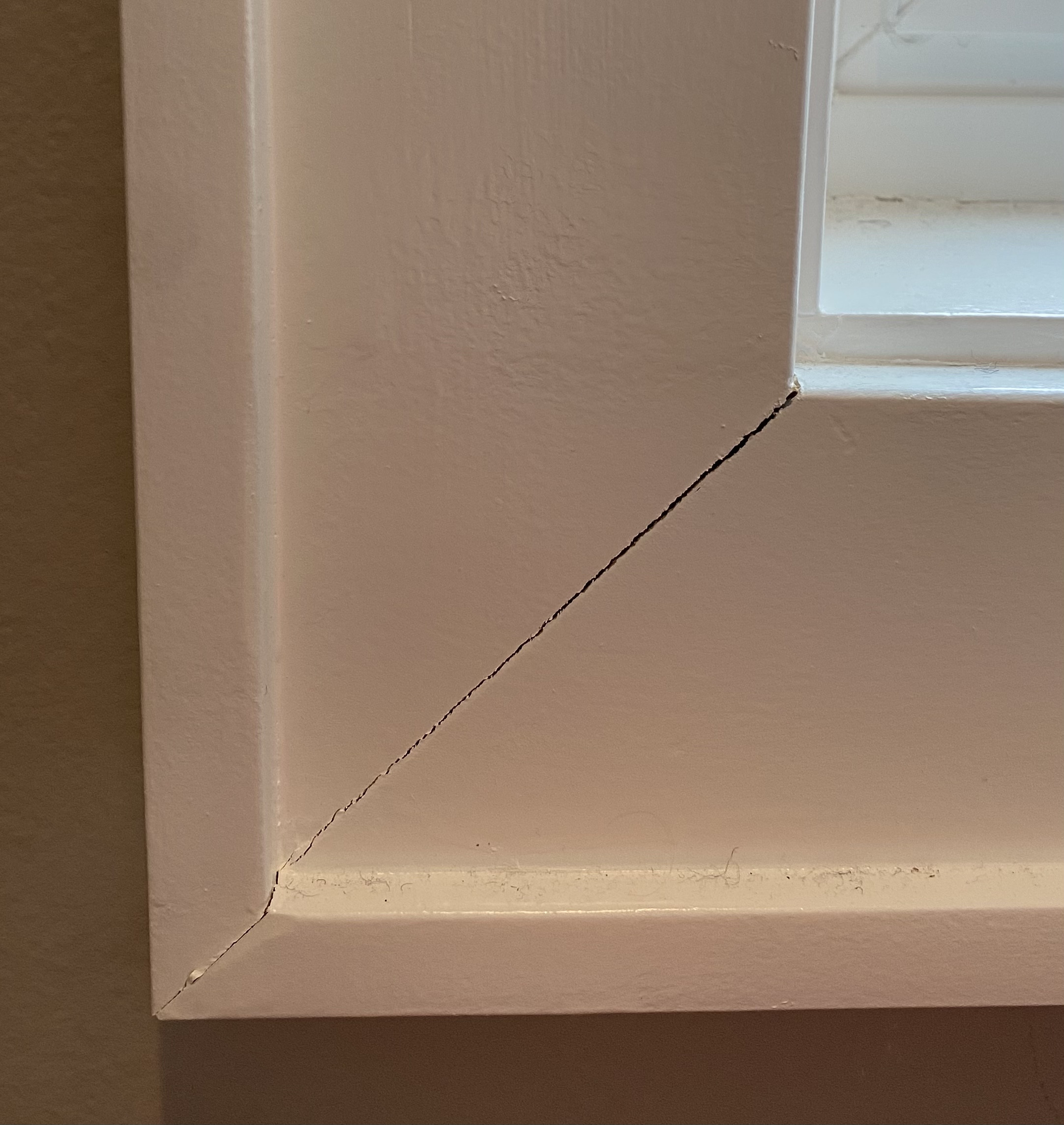 I'd hit it with a bit of spackle and repaint. If you want less of this in the future, glue the joints thoroughly and backprime the trim. (Backpriming slows moisture loss/gain.) Some people will even use biscuits, but I'm not a huge fan.

Also, what could I have done to prevent this in the first place?

I love mitre joints as much as anyone, but one has to be aware of why those mitre joints fail. When you built those frames you were undoubtedly careful to cut perfect 45 degree angles, proudly fit two pieces together and checked their fit with a square and proudly thought to yourself, "man o man, I am THE craftsman!" (I have done the same thing many times.)

One of the favorite responses in this stack is to comment on the shrinkage or expansion of wood across grain due to changes in humidity. Indeed, that is most likely what is at work in your window casings.

In a mitre joint the geometry changes when the width of the board changes. Sure, a right angle cut will remain 90 degrees (assuming the grain is parallel to one leg of the angle and the other leg is perpendicular to the grain). But if you measure the perfect 45 degree angle that you cut after humidity does its thing, it is no longer 45 degrees. Recall that both legs of a 45, 45 degree right triangle are equal in length. Now the legs of that formerly perfect angle are no longer equal and the actual angle might be as much as 1/2 degree, making the opening twice as wide or up to 1 degree, very noticeable.

In response to your suspicion that the movement is due to thermal expansion and contraction, you might be right. I did a little internet surfing and found that the coefficient of thermal expansion for for pine perpendicular to the grain is about ten times as much as parallel with the grain. (For oak, the two coefficients are almost equal to one another.) You commented that the interior door frames are giving you no problems. Perhaps because the interior temperature and humidity are relatively stable throughout the year, keeping the changes in the size of mitre cuts small enough to prevent opening of the joints. Of course, at the windows everything turns cold so the relative changes parallel and perpendicular to grain might be enough to cause the joint to open.

In the case of your windows, some sort of butt joint or lap joint would not develop the opening, but alas, would not be as cool as the mitre joint.

Not the answer you're looking for? Browse other questions tagged wood-movement miter-joint or ask your own question.

8
Planning for wood movement in drawers
11
How can I deal with wood from DIY stores that is crooked and may or may not be dry?
5
How to deal with wood expansion when combining with a steel frame?
7
How can I fix warping on board made of glued 2x4s
6
How can I create a planked wood table top with a plywood core?
2
How might I fix wobble in my studio desk build?
5
How to make a mitre cut along the width of a board with hand tools
0
How can I replicate this joint?