Can anyone tell me if this is a oil sharpening stone or water sharpening stone? It was my grandfathers, and I would like to put it into action, but not sure exactly how. 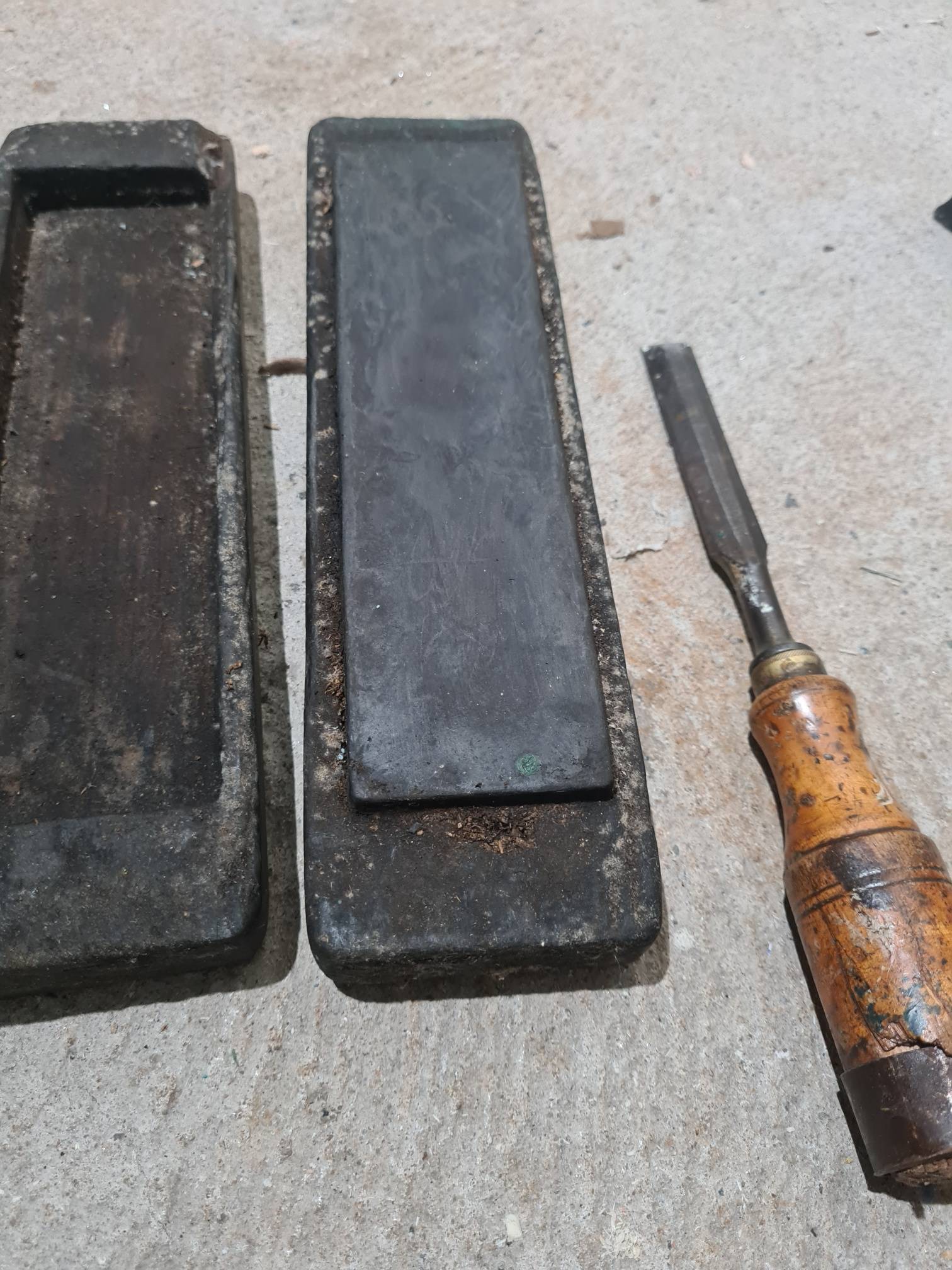 Simple answer: put some water on it.

If you have an old oil stone, then it probably still has some oil buried in the nooks and crannies. If you put water on it, some of that oil will probably lift off and make the water "oily". You'll see various artifacts of water and oil - a film, a rainbow sheen, drops suspended in the water, etc.

If it's a water stone, well, you'll get nothing except maybe metal particles.

Now that we have a photo to go on it's at least possible to say this was definitely an oil stone in its day, because of the box. Honing-stone boxes don't come to look like that unless they've been used around oil for a long, long time.

What is it?
As covered in a previous Q&A How can I identify sharpening stones?? nobody can tell. It's literally impossible to even guess. While the stone appears to be black or dark grey (there are stones this colour2) this could be entirely surface filth! As you'll see if you look around online many old stones are found in a very dark state, close to black in some cases, but after cleaning their native colour is found to be something completely different (and often much lighter, as in the example in the link above).

The distinction 'waterstone' v 'oilstone' can be largely arbitrary. What this means is that for a large number of stones you can feel free to use water or oil as you prefer. In this case despite the stone previously being used with oil, and even if the stone was specifically made to work with an oil if you prefer it can now be used with water, soapy water or any number of other watery liquids such as screen wash, Windex or equivalent window cleaner (I would, however, strongly steer you or anyone away from commercial honing liquids1). Many 'oilstone' users report that their stones work much more efficiently when not used with an oil of some kind.

I would like to put it into action, but not sure exactly how.

While you might you might be able to use the stone as-is, as covered in my previous Answer it'll work a lot better (like new) if you clean it, and this is vital if you wanted to look elsewhere for a firm ID on the stone type.

Cleaning
There are various methods as outlined in the previous Answer above, and also in How to clean sharpening stone in wood case? which can be used singly or together depending on what you find as you begin to work on it. Start with just a wash in hot soapy water (as hot as you can bear with gloves on) and go from there.

Flatten it
Also the surface is likely not flat — most old stones that were users in their day are not even reasonably flat when found, and this looks like it might have a localised hollow that it would be very advantageous to get rid of. And lapping it flat is one excellent way of getting at least one face back to original colour since it will expose an entirely fresh surface.

Check the underside first before you do this. Sometimes only one of the two faces of a stone was used and the second one could be pristine! I've been lucky this way a couple of times among the numerous vintage stones that I've bought in recent years.

Box too
If you wanted to you could spruce up the box as well using some of the same methods used for stones, solvent cleaning especially will be found to be very effective for oil-soaked wood. You can even fully immerse wood in solvent to dissolve out absorbed oil; you'll likely need to weigh it down so it doesn't float. And no, this doesn't harm the wood, although it will look really dry and 'parched' when the solvent evaporates afterwards.

As much sanding or scraping as you're comfortable doing and then a thin application of literally any finish and the wood could end up looking surprisingly fresh, quite close to new in some cases3.

1 Because they are usually grossly overpriced — more expensive than good single-malt whiskies! — while being nothing more than glorified window cleaner in many cases.

2 Including natural slates, black Arkansas stones, carborundum stones originally manufactured by Carborundum and later by many others, and Crystolon stones from Norton which are still made today.

3 The box though won't end up looking like-new, unless you take the surface right down by planing or heavy sanding it'll still have plenty of dings and scratches, stains and rounded edges that show its an old piece. So you won't lose the "patina of age" unless you want to.