How to make a stronger butt joint where two panels meet

I'm designing a project where two hardwood 3/4" panels will be joined at a 90 degree angle and the aesthetics call for a butt joint, but I'm thinking that it would be better to strengthen it in some way. For reference, the panel is just over 8" long.

Here's an example of what I'm trying to do: 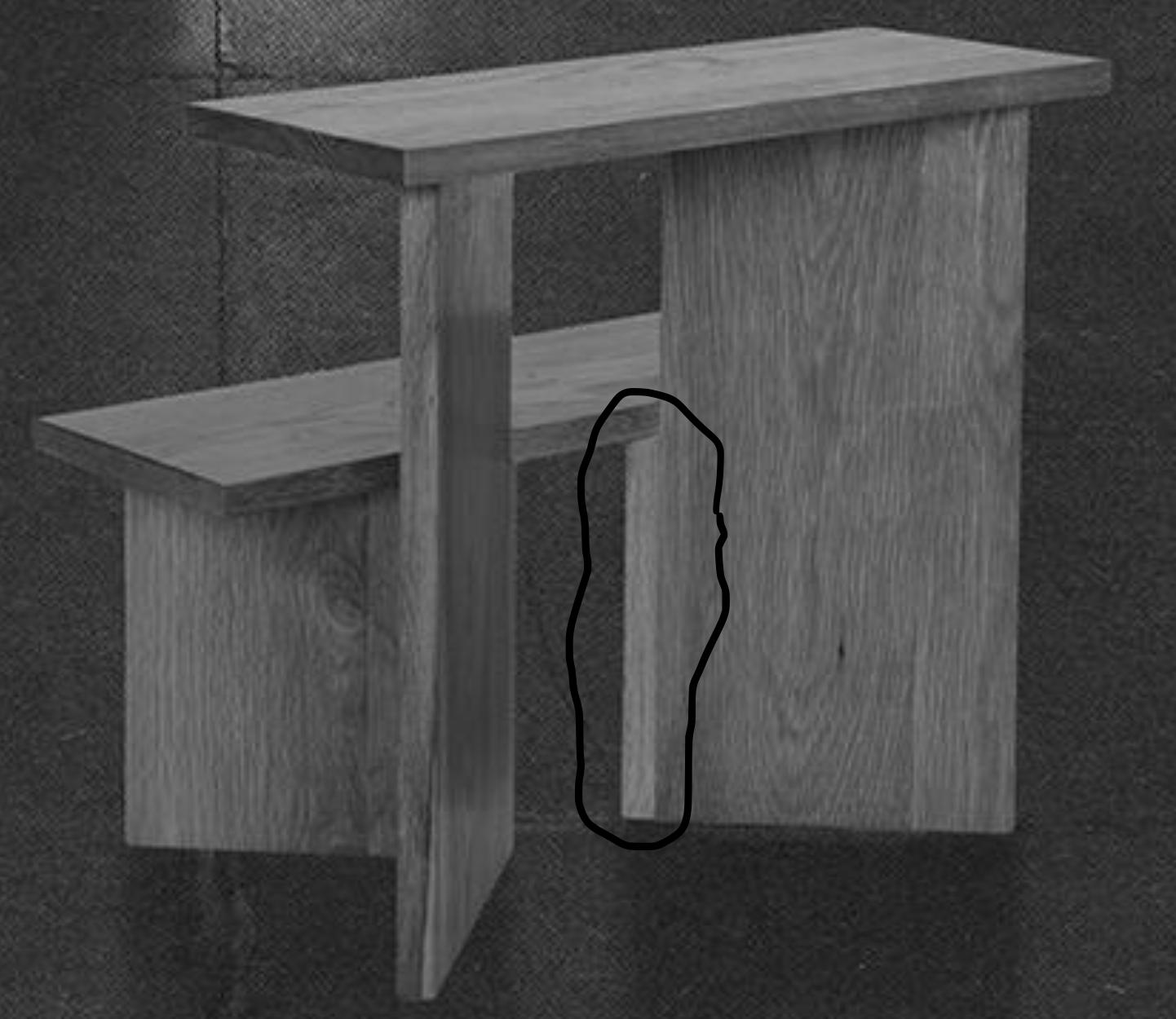 My first thought was a long mortise and tenon joint (possibly separated into two, but this runs with the grain so I don't think that it would need that?). I'm having a hard time finding examples of using it on two long panels like this though, and am concerned about the short tenon since it is joining into another relatively thin panel.

A rabbet is a common joint for panels, but it isn't the appearance that I'm going for. I could live with it if I had to, but as before, I haven't been able to find examples of using it for only two panels that are free-standing. I'd imagine that the typical box using rabbets would be a lot stronger than just two panels like this.

Note that I specifically do not want the appearance of the traditional joints which are visible such as dovetails, box joints, miters, etc. or visible fasteners.

Right now I have this: 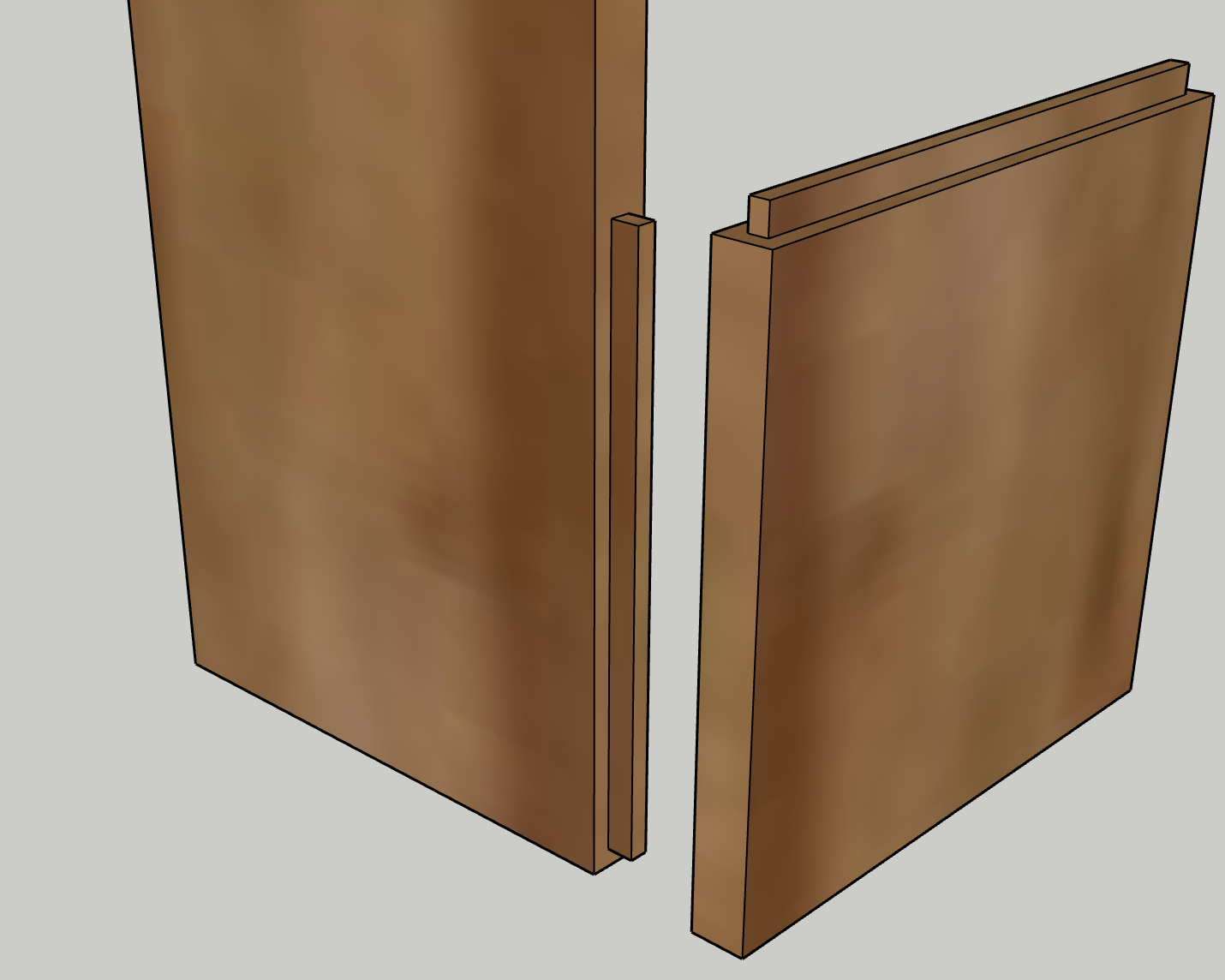 Any suggestions would be appreciated!

You likely don't need this to be any stronger than the glue-only joint, if you do it right. Think of the stresses this is put under in use, the joints won't actually have to endure strong forces since the normal forces go straight down the length of the boards to the ground. And as I mention in this previous Answer the end grain | long grain joint is stronger than is widely assumed; again, IF done right.

However, there's no reason not to reinforce if you can/want to. Erring on the side of strength is rarely something one regrets1.

Nails or screws
One of the simplest and strongest options is of course nails, but screws would be quite a bit stronger. Counterbore and fill the holes with long-grain plugs if aesthetics demand; do this well and the screw holes will be almost impossible to see on the finished item unless you go looking for them. But alternatively you can always use a contrasting wood for the plugs to make them a feature.

Dowels
Personally I'd use through-dowels since I'm a fan of the look of the exposed dowel ends, although obviously this is a very personal thing. It does make drilling the holes a snap! :-)

If you wanted to use blind dowels then you won't loose much strength if they go deeply in the thickness of the second board; you could leave as little as 1/8" and it probably won't be an issue.

Dowel joinery is immensely strong2, but to add even further strength without using a large number of dowels they can be inserted in dovetail fashion, where e.g. each pair is at opposing angles. The angle only needs to be shallow for the effect to kick in, so if you use through-dowels their ends aren't very obviously oval in case that would bother you.

Loose tenons
The classic expression of this these days is the Domino, but the technique is much older and this can be done using a normal router (or even with hand-cut mortises naturally) and shop-made tenons.

In case you don't know, this method has the advantage that a single setup cuts the joints in both pieces of wood, while sacrificing little or no strength compared to a conventional M&T joint3.

Spline
Splines aren't used much any more (actually I'm not sure how much they were used in the past either) but it's a very strong way to reinforce even a basic mitre joint, which is a lot weaker than the joint you're doing here. Note that if you select this option the grain of the spline must be at right angles to the joint — you often see this done incorrectly online, by YouTubers for example! — or, use a strip of plywood.

Note on the original SketchUp image: at the request of the OP, I want to make it clear that I dismissed the idea of the long vertical 'tenon' from the outset. Tenons aren't used on the edges of boards because this would align them with the grain and make them very weak. Worth noting also that in standard cross-grain tenons very wide ones are avoided anyway; typically for wide and very wide boards you use two or even three narrower tenons rather than a single one that spans the same distance.

You haven't asked about this but do be aware that the tenon you show on the end of the board is much wider than normal. The conventional solution for tenons on a particularly wide board would be twin, or even triple, tenons.

Remember that in effect the joint you're creating here between the 'legs' and the steps is a cross-grain one, and as such it has to allow for all the expansion and contraction across the width of the uprights. The wider the boards the more and more important this becomes, especially with flat-sawn material. As unpleasing as it probably seems it's actually preferable to use metal fasteners here.

1 Much of furniture work is about making stuff as strongly as possible to future-proof things, to cover unexpected or unusual forces pieces might be exposed to, e.g. from being knocked over or simply when dragged across the floor.

3 It's possible to make this joint much stronger than any conventional M&T, for example by using aluminium for the tenon,

You could use biscuits or dowels. The second picture of the blind mortice and tenon would work as well.

13
What are the different grain directions, and how do they affect joint strength?

16
What might be stronger than a miter but still look like a miter joint?
5
Joining an irregular, detachable modesty panel together and to an irregular shaped desk
13
Mortise and tenon joint proportions for 3 wooden beams corner
1
How should I affix and refinforce these butt joints?
4
What is it called when you use screws with a butt joint?
6
How to hide base dados behind box joint corners
3
Need help with design of entryway bench joinery
4
Pocket Hole Butt Joint
4
What are the advantages of coping a joint vs. mitering?
1
Doweled miter joint vs doweled butt joint