Strong joints to use when making custom frames

I found this large 4' x 3' mirror in the garbage. It is a heavy beast. I plan on making frame for it but I'm worried about the joint.

I only have experience with miter joins and splines which seems the way to go. In this video by Matthias Wandel he made a slightly smaller frame which was just reinforced with splines.

For something that large, I would want more than just a glue joint holding it together. I would want some sort of mechanical connection between the sides and top/bottom, such as slip tenons, dowels, or mortise and tenon.

If you want the look of a mitered corner, I'd suggest going with mitered half laps. The glue area is much larger, and you can pin the joint if you want. 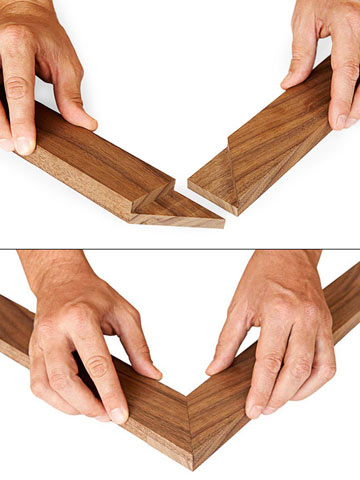 If you go with a mitered joint, make sure the top/bottom are mitered into the sides so gravity will not be pulling the joint apart.

Just a bit on the terminology, a true spline runs lengthways in a slot milled into the face of both mitres, through all or most of the joint (a through spline or stopped spline respectively). A different joint reinforcement, where a piece of wood is inserted into one or more slots milled across the corner is now commonly also described as a spline but this is more accurately described as a mitre key. In the video you link to Matthias is using mitre keys, not splines. 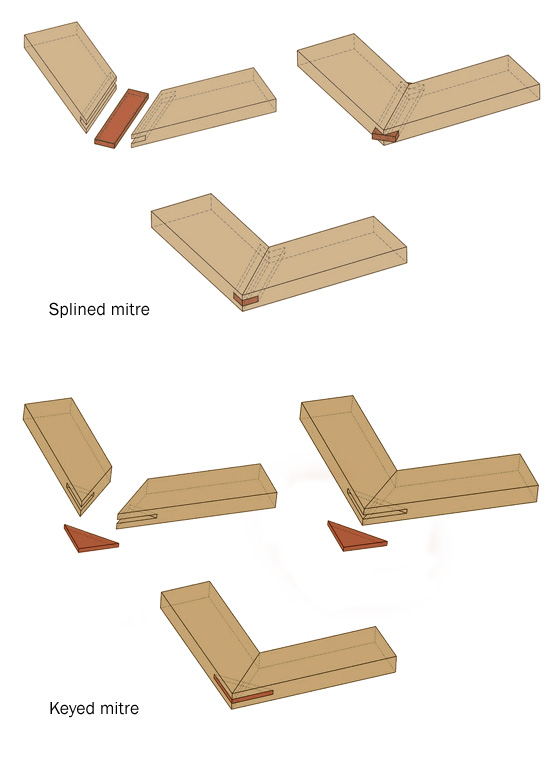 Mitre keys are generally regarded as not adding greatly to the strength of the joint, while splines do provide a significant improvement. However, this is with keys and splines of conventional size.

The strength of each reinforcement is due to three factors: structural advantage, the thickness of the wood slivers used and the glue surface area. The splined joint being superior in all regards. However, mitre keys were originally quite small and done using veneer thicknesses, resulting in only modest added strength while the keys in the video on the other hand are far larger than conventional ones and also thicker. So they probably add as much, if not more, strength than a typical spline would, being of relatively modest width (25mm / 1" being a typical maximum).

If you use either sizeable mitre key or fairly wide spline, using wood of some thickness (perhaps above 3mm / 1/8" material) I think it likely that you will end up with joints that are strong enough.

Even saying that, if you would prefer to reinforce the mitres using a method that is faster there are a few I can recommend. And the first two are guaranteed to provide greater stability and strength.

These are L-shaped steel mending plates or plywood corner braces. They are simply screwed or nailed into the frame at the back and essentially make the joint completely rigid.

Last but not least, the simplest reinforcements of all: large staples or corrugated fasteners. If you don't have any philosophical objection to using mechanical fasteners both of these require no effort to install yet add hugely to the strength of the joint, as the metal would have to shear through or be torn free from the wood for them to fail. Some people consider them crude and ugly, but they work and I would argue that their ugliness is irrelevant as they are on the back of the joint where nobody will ever see them.

LeeG's answer is a good one, but I would also say that a well done spline joint would also work, you would just have to make sure the spline goes all the way through the width of the frame not just a little corner of it.

It should then give you a similar gluing surface as LeeG's answer. It might come down to which one is easier for you to create.

Though on of the things you could do to make either stronger would be to make 'pins' that go through the frame from the front of a different wood, thus giving it more strength AND a nice pretty accent. 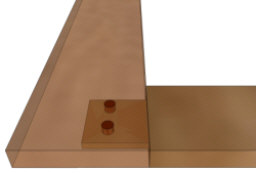 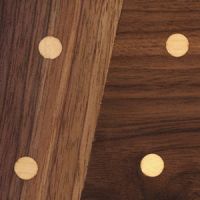 In cases where you do not want to damage the outer edge of a decorative frame (Like a nice picture frame) you could do this with a biscuit joiner. I have made many strong frames with a "detail biscuit joiner", a perfect mitered cut and wood glue.

What about adding a grove in your actual frame to allow the mirror to sit closer to the front. Then you could get some sheet material and pin/fasten from the back. Then you would have that additional cohesion of the fasteners all around the mirror.

9
How should I orient a spline along a long edge join?
5
Fixture and jig, what's the difference
5
Picture frame using L angle brackets
3
Strengthened leg miter joint with spline [key]
0
How to tighten up a miter joint in a casing

17
What am I doing wrong when making lap joints with my stacked dado set?
14
How to cut the centre out of a large round of wood
5
How can I prevent a drawer bottom from sagging?
7
Should I use cleats or brackets when putting up shelves?
4
What are my options when laminating wood with butt joints?
4
Are these work desk joints strong enough?
3
What is the minimal spacing between edge of leg pommel and mortise and tenon apron (intersected by tusk tenon)
5
Edge joint failure - what is the cause?
5
Chamfering medium diameter holes in birch veneer plywood
0
How to seal and treat wood when building a wooden kitchen sink?