Options for attaching bed legs at an angle

I'm trying to recreate this bed. 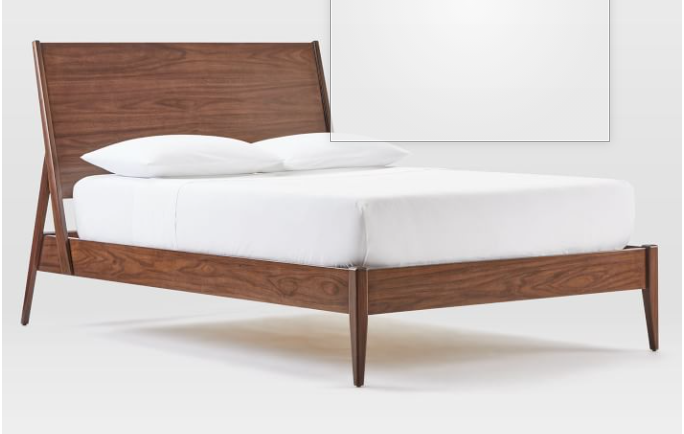 Right now I'm trying to figure out how I'm going to attach the back leg which is at an angle. It needs to be disassemblable. The manufacturers assembly instructions have a wooden cleat bolted to the back board. 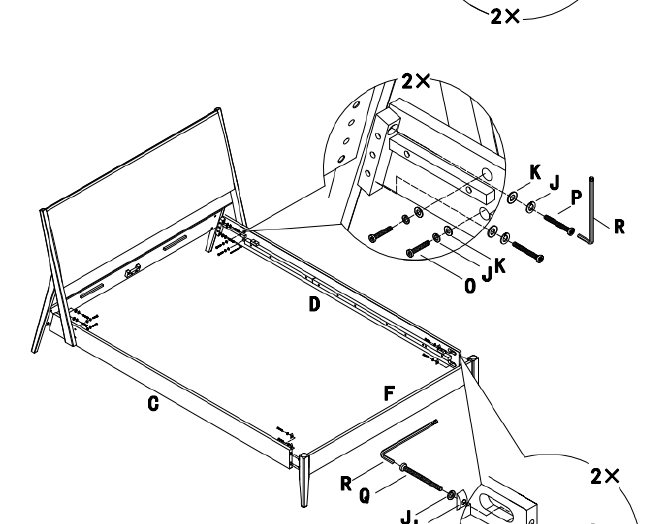 The back board is .75in wide. I could recreate this using threaded inserts and 1in bolts. Could I also just screw this together with regular wood screws? The back board will be mortise and tennoned into the back leg.

I'm a little worried about the angled butt joint between the side rail and the back leg. I would think there would need to be dowels or something there.

I had thought of two different ways to do this. 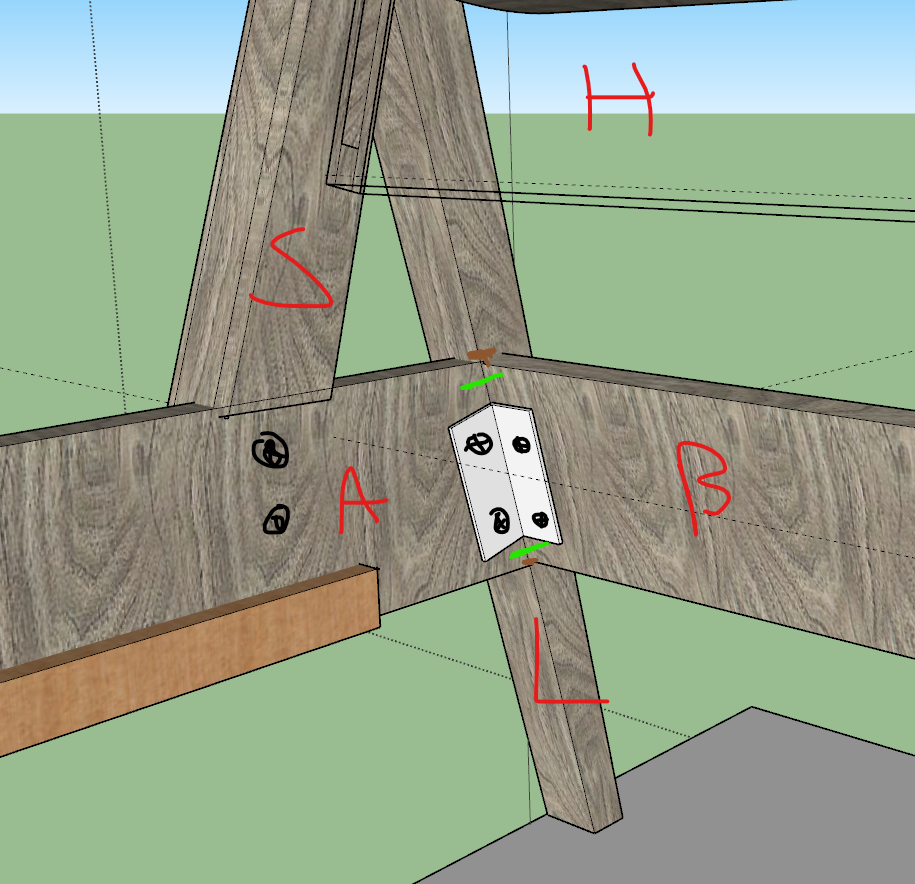 I'm not sure what screws I could use that would go through the .125" steel and into the .75 rails. I'm also worried about getting the dowels lined up in the angled butt joint. 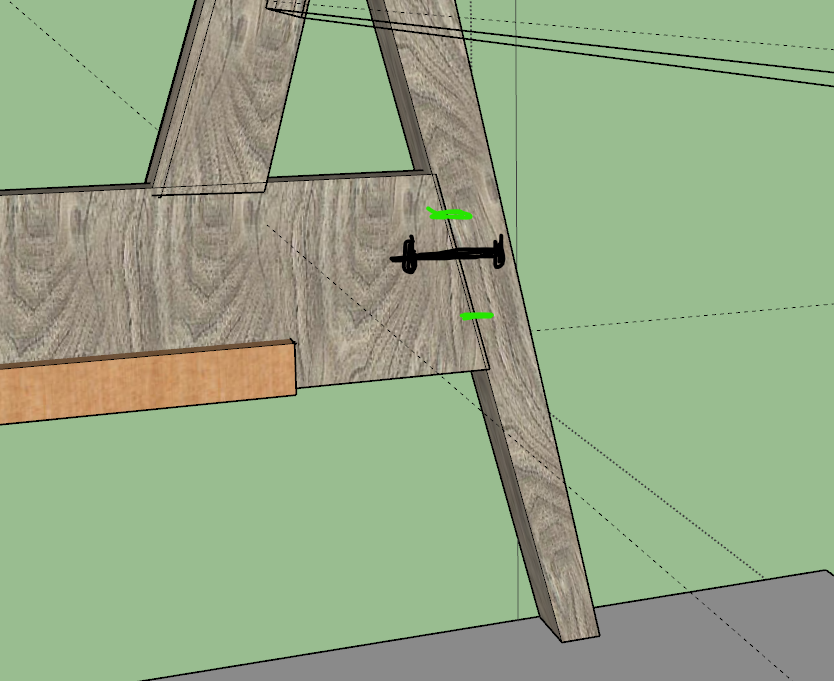 I think this would use the most traditional bed making methods, I'm just worried about the angle. I'm not sure how to get the holes for the dowels and bed bolt to all be parallel and level so that they support the bed.

Thanks for thinking about this with me.

The manufacturers assembly instructions have a wooden cleat bolted to the back board....I could recreate this using threaded inserts and 1in bolts.

Since your overall goal is to copy the design in the first photo, using the same method for joining the parts seems like a good idea. Assuming these beds aren't all falling apart because of a flaw in the way the legs attach to the rails, it also has the advantage of being proven to work in this situation.

Could I also just screw this together with regular wood screws?

You could, of course, but you probably shouldn't. One of the requirements you stated was that you need to be able to disassemble the bed, presumably for moving and such. While you can obviously remove and reinstall wood screws, doing so repeatedly quickly wears the threads cut in the wood. If you need to disassemble a screw joint from time to time, use threaded inserts.

Angle iron bracket with dowels in angled butt joint. I'm not sure what screws I could use that would go through the .125" steel and into the .75 rails. I'm also worried about getting the dowels lined up in the angled butt joint.

This seems like it could work, but again I'd use threaded inserts in one of the pieces. It's really not so different from the original design -- you're just swapping angle iron for the cleat and adding dowels. Use a jig (see below) to ensure alignment of the dowels.

Bed bolt with dowels...I'm not sure how to get the holes for the dowels and bed bolt to all be parallel and level so that they support the bed.

It's easy to make a jig that'll help you drill the holes at the right angle and ensure alignment. Take a square piece of scrap that's the same height as the bed rail, and preferably the same thickness too. Mark the two "top" corners, and then drill holes for the dowels and the bolt horizontally through the thickness of the square. Now cut the square in half at the same angle as the angle on the end of the bed rail. This gives you two pieces with angles that match the rail and the leg, and with the holes spaced the same. Use each one as a drilling guide: clamp in position on the part and drill through the holes into the part, so that the jig determines the position and angle of each hole.

It should go without saying that that's not the greatest drawing, but let me go out on a limb.

Your angle is a decent idea, but I'd be worried about only having two screws per side. That joint is going to be under enormous stress, and any loosening of the joint due to wood movement (both the seasonal and activity kind) is going to cause problems. Frankly I'd be a little more confident with bed bolts. And keep in mind that bed bolts normally operate almost entirely in shear, but these will have a significant load in tension as the angled legs try to lever the short bed rail away from the side rail. The smaller the angle you give the headboard and legs the better.

Getting the angles right for drilling holes isn't actually all that big a deal. When you cut the side rails, start with over-length pieces with good square ends. Then, when you cut the angled ends for the rails, keep the offcuts. They have exactly the right angle to make drilling jigs for whatever hardware you decide upon.

Also, be very careful with joining the rear (head end) legs to the angled headboard. Again, keeping your offcuts can be very useful, but the point is that people will naturally sit and recline against that convienient angled surface, and the end of the legs is going to have to take the strain. Don't go overboard making the legs elegantly slim - they'll need to take considerable bending force.

I may be overly cautious/alarmist, but I'm a big believer in Murphy.

Not the answer you're looking for? Browse other questions tagged joinery furniture assembly hardware or ask your own question.

6
Make a bunk bed v2
6
What is the strongest join for splayed legs?
8
Attaching Legs to a Table
5
How do I prevent the rungs of my loft bed from moving slightly in their join with the legs?
1
Farmer Table Legs
3
Is there a better way to join these two boards for a platform bed?
5
Joint recommendation?
4
How to calculate rotation for three square interlocking angled legs?
1
What knock down hardware can I use on this platform bed frame?
3
Loft bed design