A recommendation in a book says "The countersink must have only one flute and must be ½" diameter".

As far as flutes on a router/drill bit are concerned - reading other questions here on woodworking - I gathered that the greater the number of flutes - the quality is higher but the process is slower - since the feed rate is slower.

Why do countersink bits with different number of flutes exist?

As covered in the Comments under your previous Question, this is another pronouncement from the author where he's presenting his opinion as fact, without any evidence or apparently any arguments in support.

The simple fact is that both styles/types work, and can work well.

Style
The specifics of a countersink's shape are more important than the number of flutes, by which I mean it must be shaped properly, which isn't the case with many cheaper countersinks of modern manufacture. They can look indistinguishable from a quality one to the naked eye but the devil is in the details.

While the commonest multi-flute countersinks are originally intended for metalwork this style can work perfectly well on wood if made well, sharp, and used appropriately1.

Size
Now as to size, here's where I have a particular problem with that, achem, "one size fits all" advice. I doesn't take a genius to think of cases where you definitely wouldn't want to use a countersink that's a whopping 1/2" (~13mm) in diameter! 2

Probably also worth mentioning the following in this context.

Countersinking doesn't have to be a separate operation any more
There are numerous variations on this basic idea but the basic feature they all share is that they combine a countersink with the pilot bit so both operations are done simultaneously. 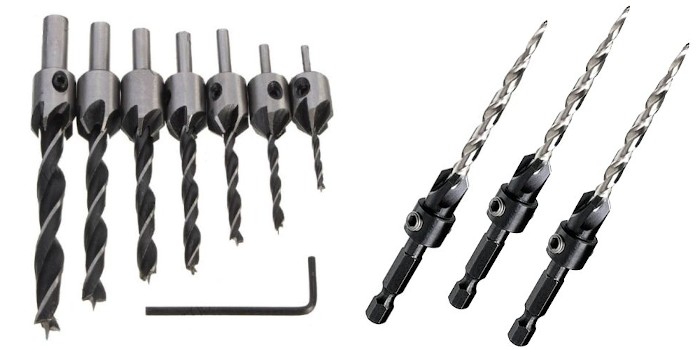 Note it's clear that both of the above are directly intended for use on wood due to the design of the drill portion of the bit, yet despite this they have multi-flute countersinking portions.

These could be a huge timesaver in a production environment where perhaps dozens or hundreds of holes are needed daily so they're probably most applicable to that. But they're inexpensive enough that even the casual hobbyist could acquire a small set for the occasional drill/countersinking they do..... if they can't stomach the 30 seconds extra it takes to countersink separately ^_^

1 As touched on in a previous Q&A, see Why is my countersink bit making hexagonal holes?

11
Why is my countersink bit making hexagonal holes?

5
What is the best drill bit for MDF?
7
What is the difference between a black oxide bit and a titanium bit?
2
What are the pros/cons of HSS vs Chrome Vanadium in drill bits?