How should I have avoided breakout/spelching here?

I managed to cut the tenons pretty close to the stool, but I had a devil of a time getting the stubs to be flush with the seat; I also really messed up the surface finish of the seat in the process with scratches and digs from the saw and, later, the handplane. 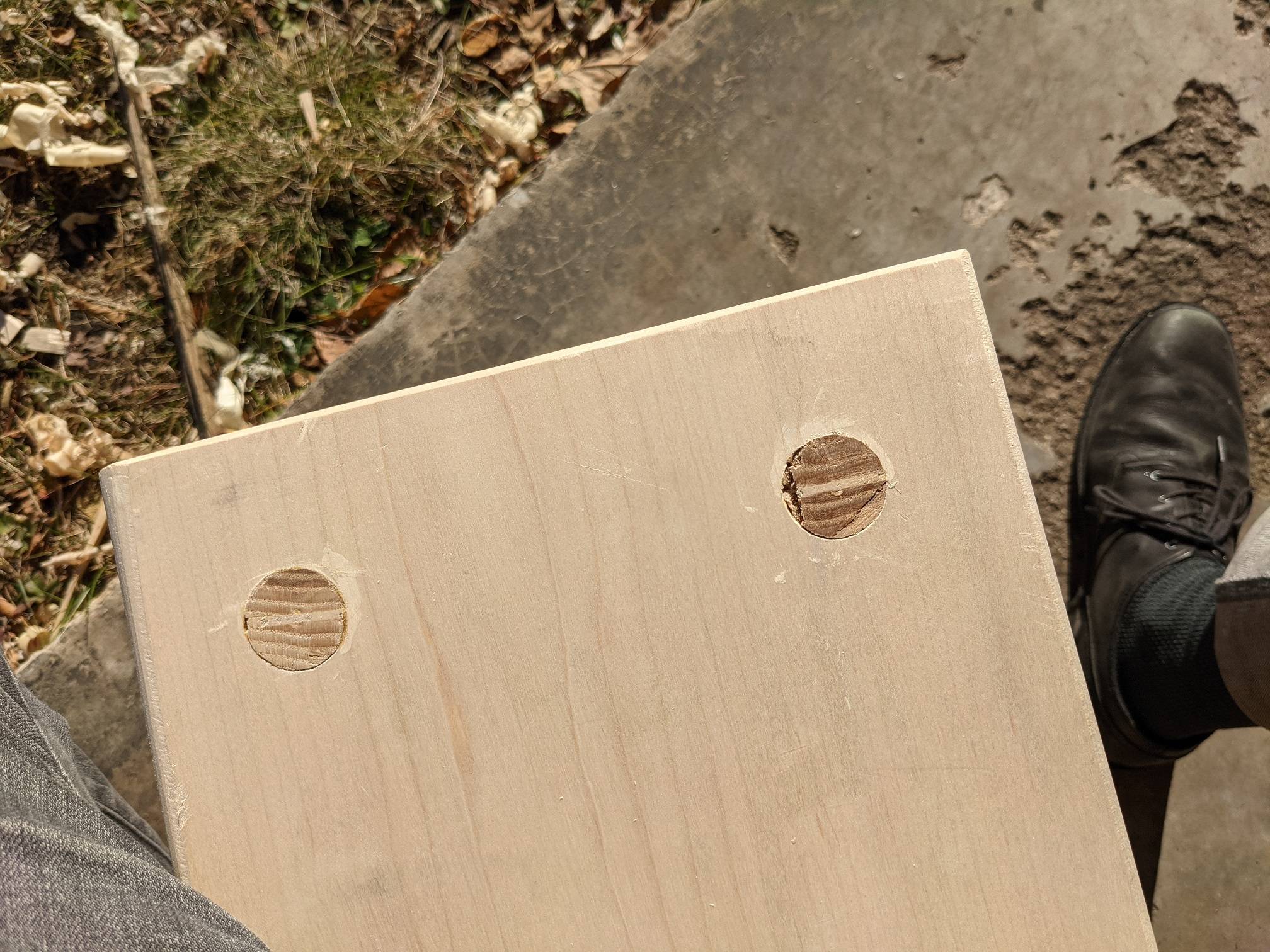 The stool seat is hard maple, and the legs are ash - it's my first time working with ash and I found the end-grain very difficult to plane or pare with any degree of control. 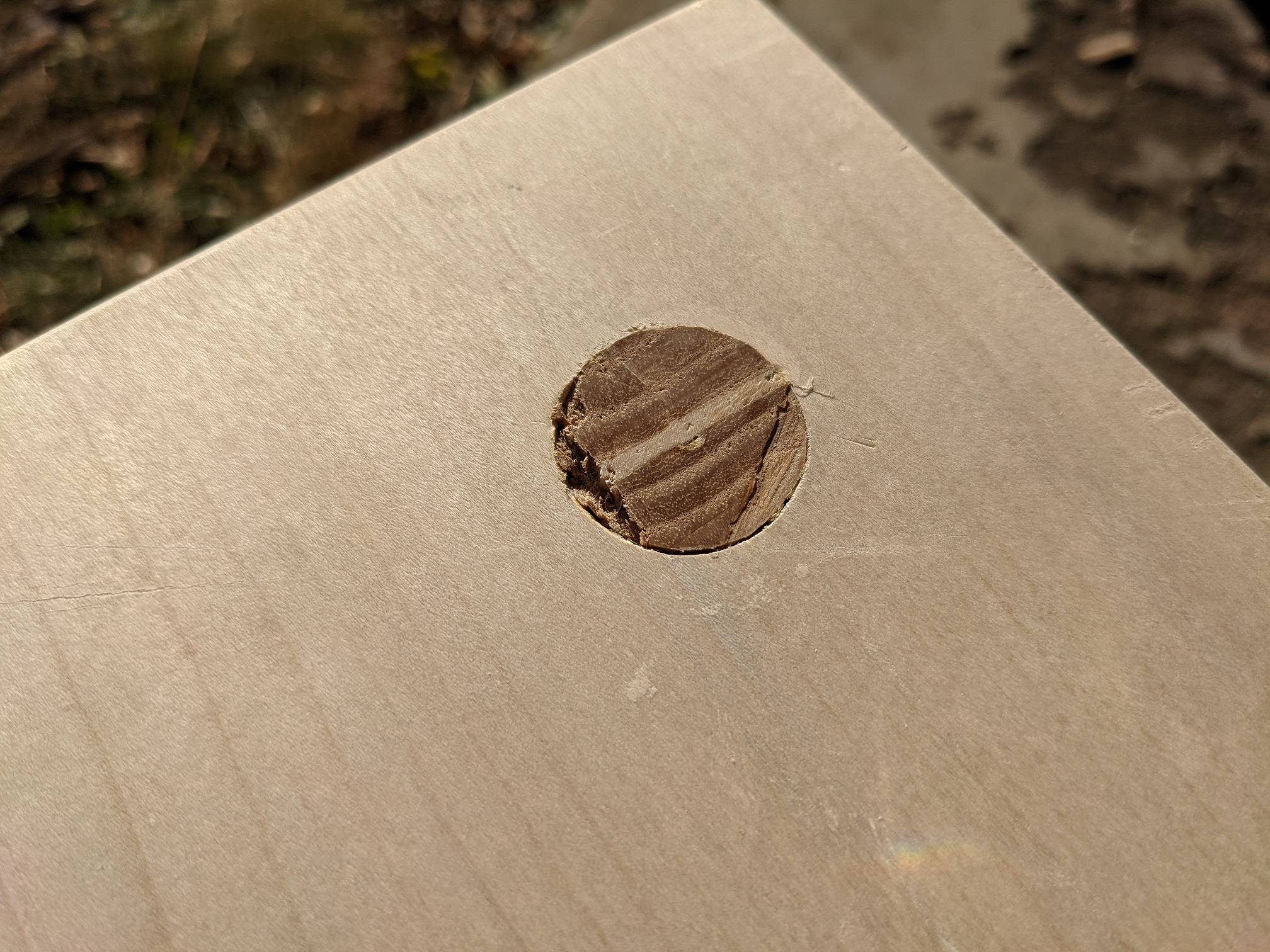 The spelching you can see here was really disheartening - it happened at the end of a paring cut with the chisel. However, I got similar results with the plane (but not as severe, since the tenon-stubs were taller when I was trying the plane).

I'm relatively sure sharpness isn't at issue; I sharpened my plane iron and the chisel right before trying this (I knew planing endgrain was a pain) to the extent they were both able to take hairs off my arm.

I know from the Paul Sellers video that too-tall tenon stubs are quite tricky, so I'm sure this was part of my issue, although I don't see how I could cut any closer to the seat without completely marring the surface.

Eventually I gave up and flattened the last bits with a sandpaper-block, even though I was trying to avoid using any abrasives and achieve an OK finish with the plane. However, the sandpaper (400 grit) scuffed up the maple figure and I had to do a finishing pass with the plane afterwards. (This was its own challenge, probably best for another question though).

So my question is, what should I have done here? How do I trim the tenons so they are flush without messing up the surface of the seat? Alternately, if it's a foregone conclusion that the seat will be marred, how do I plane it so I'm not catching on the tenon-grain as I'm planing with the seat-grain?

Thanks for any help you can provide!

Don't beat yourself up too badly over this. You've just learned empirically (as many of us have!) the one key lesson of flushing projecting tenons or dowels — don't work them1 until they're almost flush already.

The way to do this is to saw off as much of the projecting wood as possible (ideally all, but in practice this isn't always doable).

You don't absolutely need a flush-cutting saw for this task. Now to be fair, flush-cut saws can now be bought relatively inexpensively but you tend to have to pay a bit more for ones that truly work as advertised. Plus, these are single-purpose tools, something that not a few woodworkers try to avoid buying. And worst is that even with these you may end up marring the surrounding surface anyway!2

So if you also want to limit your toolkit to the minimum you can use any number of other saws for this, and do one of the following.

This way you're only subsequently removing wood equal to the thickness of one layer of tape or thin card by paring, planing, scraping and/or sanding. Note that you still have to be careful of minor chipout until the wood is absolutely flush.

I'm relatively sure sharpness isn't at issue; I sharpened my plane iron and the chisel right before trying this (I knew planing endgrain was a pain) to the extent they were both able to take hairs off my arm.

As covered in a previous Answer or two, shaving arm hair is not a good proxy for a cutting tool's ability to cut wood. What is a good proxy is the ability to cut wood :-) so keep scraps of pine on hand — not a harder wood, softer woods are much less forgiving — and use their end grain if you want to test sharpness in a meaningful way.

Eventually I gave up and flattened the last bits with a sandpaper-block, even though I was trying to avoid using any abrasives and achieve an OK finish with the plane.

You should feel absolutely no shame in this, there is too much emphasis being placed by some online sources that finish-planing wood is the thing to aim for. Finish-planing meaning the very last thing to touch the surface is the plane, with absolutely no scraping or sanding afterwards.

While this is something you can aim for I'll let you in on a dirty secret of Western woodworking: almost nobody does this.

Even the people who espouse a high degree of planing proficiency, and tell you their 'secrets' for sharpening and plane setup to achieve this, are regularly scraping or sanding some or all of their surfaces. The fact is that sometimes the wood won't cooperate with your tools, so you have to take an alternate route to achieve the end result you want.

1 This includes paring, planing, scraping and sanding. All of these processes are capable of breaking out wood (AKA spelching) on the far side of the projection being worked.

2 See more on Popular Woodworking, The Truth About Flush-cutting Saws.

I am not an expert but i think i would use a flush cut saw instead of a chisel.

Make the tenon a little long, at least a 1/4" and then use the flush cut hand saw to cut off the extra.

A flush cut saw has straight teeth so as to not gouge the surface it is laying on and moving across. Once it is cut you sand the top.

Not the answer you're looking for? Browse other questions tagged joinery mortise-and-tenon tear-out or ask your own question.

13
Mortise and tenon joint proportions for 3 wooden beams corner
4
Mortise and Tenon for shed wall framing
4
Tenon dimensions and orientation
5
what do you do when the two sides of a mortise hole don't line up exactly?
2
Fixing mistake: Filling the gap in a breadboard end on tabletop
1
How likely is it that my kids will break this bench?
5
Are mortises with angled walls cut the same way as square mortises (handtools)?
3
Need help with design of entryway bench joinery
0
How do I mitigate this tear-out, ideally with hand-plane and scraper?