How to make bent bed slats?

Most bed slats have a slight consistent upward bulging: 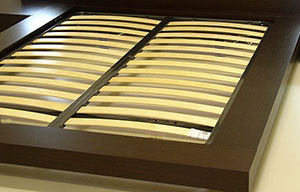 I am wondering how can one achieve this bulging and make it so precise that each slat is bulged the same amount of degrees.

I suppose that they are made by gluing two thin pieces of wood, one being a tad shorter. Am I right?

Well Ikea's bed slats are made by gluing, as you say:

So they probably are a few layers of ply with some resin applied between, which are pressed into a form with heat which (partially?) cures the resin and sets the shape very quickly.

An example of this process (albeit for chairs) can be seen at the start of this video:

If you want to do it at home then I would say that you could think about either steam bending or, as you say, gluing them up as a plywood from several thinner (bendy) pieces. The only thing is that I would think you would want them to have a little give, and gluing them up as multi-ply may result in a more rigid piece than if you were to have steam-bent or machined wood which may flex a bit more readily (though I am not certain of this, and if glued pieces are good enough for Ikea then it's probably fine).

Gluing up from multiple plies is fairly self-explanatory: Source some veneer or thin plywood (probably 3mm or so thickness), glue multiple layers together using a simple form to hold the shape while they dry. You'd have to leave them in the form for long enough to dry (probably an hour or more depending on the glue), unless you have an industrial heated press at home :)

Steam bending is a bit more involved but very doable - there are multiple videos on how to do it on YouTube. If you search for something like "steam bending wood at home" (without the quotation marks) you'll find multiple results. Most people seem to use either a home-made wooden steam box, or a capped length of PVC pipe, fed with steam either from a steam cleaner or simply a pot of water over heat, usually with a flexible pipe running to the steam box. You'll still need to build a form for this method (again, it can be quite simple), to clamp the wood while it cools and dries, and I understand there's a bit of an art to it - you'll likely need to experiment a bit and practice.

All in all, unless you have a really good reason to make them yourself, I would consider just buying some. The Ikea ones are very reasonable. 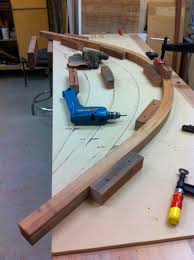 Keep in mind that consistency will be based on experience, and quality of jig and materials.

Not the answer you're looking for? Browse other questions tagged bending or ask your own question.

20
How do you straighten/bend wood planks without removing any material?
4
How can I bend plywood?
4
How can I straighten a 2' long wooden stick
2
How to fix a crack when bending a veneer
1
How to prevent desktop from bowing?
0
Straightening a green bent walking stick