Why does the blade of a sliding T-bevel have a point?

Does anyone have a good reference for the reason a typical wood or metal sliding T-bevel comes to a point?

I've always wondered, and recently this tool came up in a semi-famous YouTube video, which rekindled my curiosity. I asked in the YT comments, and someone suggested the point would not be in the way when taking inside measurements, but this seems a reach, as the point angle is fixed.

Some basic searching did not come up with anything concrete, and my venerable Encyclopedia of Woodworking Handtools does not mention the point.

My only poor theory is that the bevel on the point nests nicely inside the stock, so this might be a way to make the bevel a handy straight-edge. (Except mine is is a terrible straight-edge!) Or just so it seats nicely and locks into position for safety of the user and to protect the tool in a toolbox or drawer.

I also saw one reference to the point being handy for marking, which seems like a terrible idea (and another reference specifically called out making sure the edge of the point on a smaller version was dull for safety in a pocket).

Since the bevel along the short edge of the blade itself is some known angle (typically 45 deg.), I suppose there might be marking out techniques (saw, dovetails or similar) where the bottom of the point bevel would be parallel to some reference, useful for squarely marking out the bottom of the waste. Though, given that tails and pins would often be cut at completely different angles from that bevel angle I can't rationalize that, either.

Regardless, all my searches, if they mention the point at all, are inconclusive.

Does anyone know, either from actually using it for a specific reason, or by citing a reliable source?

I think the only answer, so far, is that there isn't a specific or vital woodworking reason.

Perhaps, a weak argument can be made that it allows the tang or blade to fit nicely into the stock. This agrees with the few references to this I've been able to find anywhere, including this one from the comments:

"The slot end is rounded whilst the other is cut off at an angle to enable it to open."
Charles Hayward, How to Make Woodwork Tools, 1945

But I am unable to find any other historical reason for this typical design. And, as pointed out in comments, some sliding T-bevels don't have this feature at all!

I did see one suggestion that you can stand the T-bevel up easily on that bevel to make setting up a saw to a common 45 degrees easier. This seems reasonable, except:

I'm going to call it, and say this is a matter of tradition and maybe ease of use. Having the blade tuck into the stock like a folding knife is just reasonable.

I'll leave this one open for a bit in the hopes I'm proven wrong!

The cut end provides a point for drawing your angled line up to a corner or an obstruction. Much the same as a drafting square (those triangular drawing tools) allow you to reach the point toward your final drawing destination.

While reading "A Little Book of Woodworking Joints" I ran across this figure: 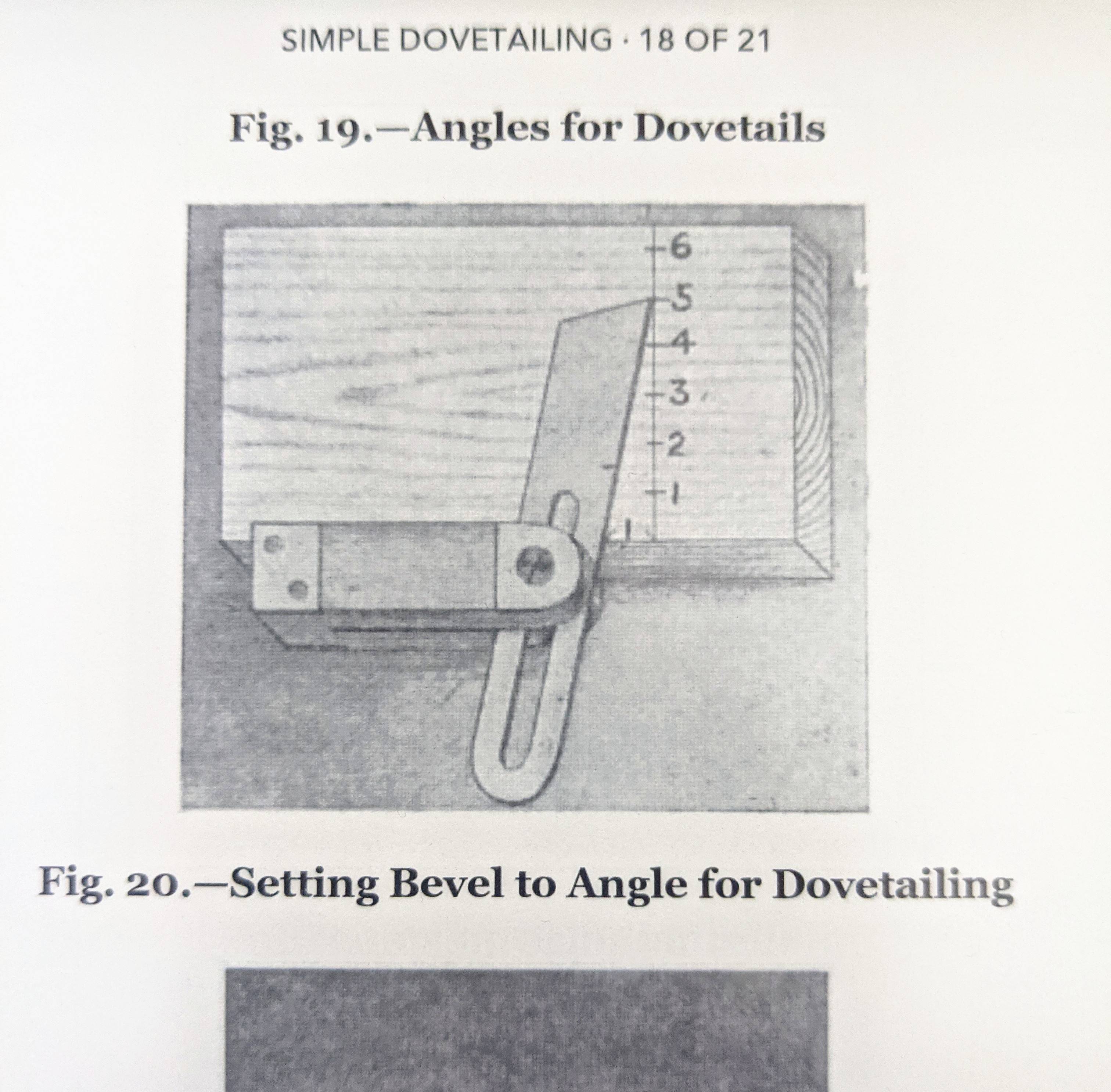 The chapter on "Simple Dovetailing" has this to say about Fig. 20:

A very good method of setting the bevel is to obtain a piece of board and set up a square line as shown in Fig. 20, and mark off six units — size 1/2 in., say — and then to the left or right along the edge mark off one unit, then drawing the splay line shown, give a line so that setting a bevel to it as shown makes the inclination — or angle — of the blade with the stock 6 to 1, which is probably about the best angle for dovetailing.

To my eye, the sharp angle on the bevel makes it very easy to set the dovetail angle in this manner to a known value by using a shop standard gauge of some sort.

A square end would work, but it wouldn't be as easy to read (in my opinion) and other shapes (a reverse angle, rounded) would make this sort of the bevel-setting impossible.

Not the answer you're looking for? Browse other questions tagged hand-tools measurement square or ask your own question.

5
When building a shelving unit, how does having the rails and stiles be out of square affect the alignment of the shelf?
8
Why would a plane have a grooved sole?
9
Traditional woodworking marks
2
Fixing mistake: Filling the gap in a breadboard end on tabletop
6
How to make bottom face of beefy table leg flat and square with sides
1
What is the difference between the jointer blade and the smoothing blade?
3
Aligning entry and exit side of drawbores
2
Does it make sense to own a #1 if I already have a good block plane?
7
Is it needed to have the lever cap flat against the blade in a shoulder plane?