Is there an advantage to removing the guard on a grinder with a CBN wheel?

I've been reading about CBN "diamond" wheels (*) recently which apparently are great for sharpening woodworking tools.

In comparison to traditional grinding wheels which apparently are fragile enough to explode while rotating, CBN wheels don't have that risk. So one function of the guard, to contain the shrapnel of an exploding wheel, is no longer needed. Great.

So I can see in many CBN examples (like below) that the guard gets removed. Is there a particular advantage to this? Would you ever need to use the top, bottom, back surfaces of the wheel for something?

Another source which mentions leaving the guard off, but doesn't go into detail IIRC (video); the video makes it seem like a choice to leave it off.

If there is not a genuine need I wonder if its better to just leave the guard in place so there is less possibility of something getting caught in the rotating machinery. 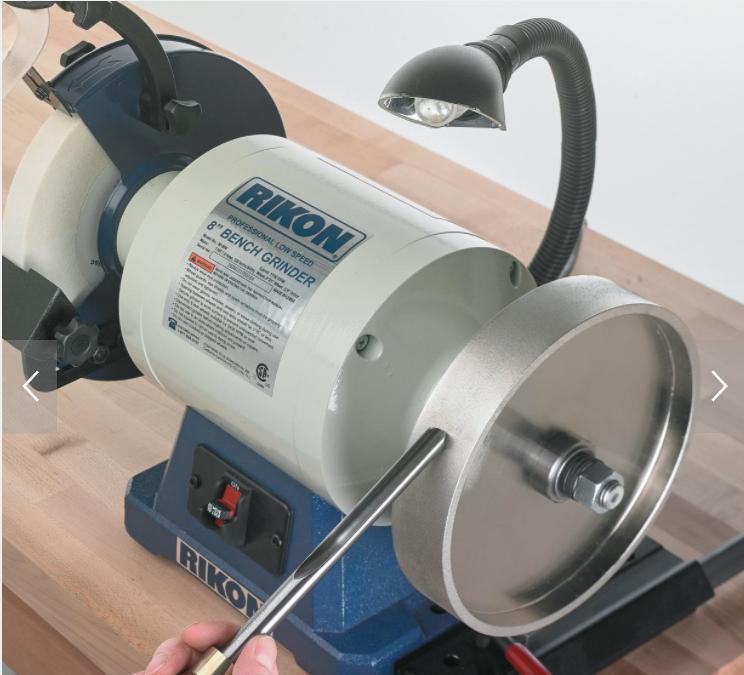 Normal grinding wheels are made from abrasive grit bonded together in a vitrified medium, so they're like a ceramic. This makes them hard and durable, but very brittle, and even the smallest defect can lead to catastrophic breakage which of course takes place at high rotational speeds, throwing the pieces off at very high velocities1. One of the functions of guards on grinders is to mitigate the risk from these pieces2.

CBN wheels on the other hand are machined down from a billet of aluminium3 and therefore aren't subject to the same risk. They basically can't break.

And in addition, as widely described by users, many are too wide to allow the guard to be fully assembled around them — the end caps have to be left off — and in some cases too wide as well — so the whole thing must be left off.

Is there a particular advantage to this? Would you ever need to use the top, bottom, back surfaces of the wheel for something?

Yes, depending on who is using the grinder. In the usual way woodworking tools of all kinds are ground there's no need to access anything but the ~90° portion of a wheel that is normally exposed when a guard is fitted. But some grinders are set up by their users to grind the tool at the top on a high rest/support with the tool being pushed in horizontally4, instead of using the typical grinder rest that's approximately on the midline.

And outside of a woodworking context, knife grinding for example will often be done towards the top of a wheel because it's convenient to run the length of the knife edge across the surface in that position.

If you can fit your guard back into place after installing a CBN wheel then by all means do so. With many woodworking practices everyone has to make their own determinations on what's safe and what's not, and levels of acceptable risk vary enormously, from the "I don't need no steenkin' blade guard on my table saw!" through to not using a table saw at all because the user considers them to be too dangerous.

1 This is why standard shop practice, no longer taught universally as it should, is to always stand off to one side when starting up a grinder, so you're not in line with the potential ejection plane if the wheel breaks as the motor gets up to full speed. Since we're on the subject, in addition a grinder wheel must always be 'ring tested' before fitting, absolutely without exception if old or secondhand, but even if it was one previously fitted. And, even if brand new because on occasion new wheels straight from the packaging can fail this test.

2 Albeit only slightly (or perhaps not at all) on many modern grinders since their guards are made of very lightweight sheet metal — both thinner than in the past and not always steel..... and even in some cases plastic. But to be fair, even the older guards made from sheet steel could be torn apart by the pieces of an exploding wheel according to firsthand accounts and accident reports.

3 Why they are justly famous for running so smoothly, they're perfectly balanced (unlike many standard grinder wheels, which are partly or wholly responsible for grinder vibration).

4 CBN wheels are particularly well suited to this approach since they don't wear down, so they don't change diameter unlike normal wheels which slowly get smaller as they are used.

Not the answer you're looking for? Browse other questions tagged safety sharpening or ask your own question.

7
Is there a safe way to make a plunge cut with a chainsaw?
0
Is there such a thing as a woodworking chisel with a high-speed steel tip?
4
Cutting rabbets with a table saw against the fence