How to preserve sole of transitional plane

My son found a Stanley #36 transitional plane in a local junk store and cleaned it up. The blade is now sharp and the metal parts rust free and repainted. He's looking to put it to use, not as a decoration on a collector's shelf, hence the non-original color choice (we've got others in red or blue that look nice too). 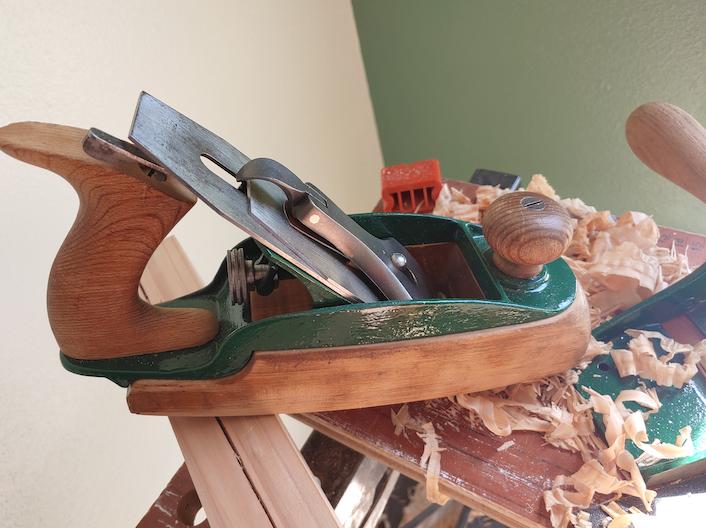 On our metal-bodied Stanleys, we coat the soles with a thin layer of 3-in-1 to preserve them between uses (and to provide some lubrication during use). What should he do with the wooden sole on the #36?

Wax seems likely to build up and transfer to the workpiece, but the wooden base probably needs something to prevent it either absorbing moisture or drying out

Wooden-bodied planes were very commonly oiled (sometimes heavily) with linseed oil and the same could be done with the body of a transitional plane. Many transitionals restored by present-day users are oiled, sometimes on all surfaces.

Apparently transitional planes were sometimes originally sold with a film finish on them instead of oiling1, and despite how unpopular this idea is today with some users a film finish is greatly superior in preventing any tendency towards warping, as well as in protecting the surface from getting grubby with handling and use. Shellac or varnish would have been what was used historically, and either is still a viable choice. Today we have lacquers now too and they'd work fine instead if preferred.

Note that if you use a film finish it should be confined to the upper surfaces, and not used inside the throat or on the sole. Users would then have lubricated the sole as their training and preference dictated2.

Wax seems likely to build up and transfer to the workpiece

No more than when used (as it is very commonly) on the sole of a metal plane.

While it might seem paradoxical, the oil or wax that must inevitably transfer from the soles of planes doesn't seem to affect finishing or glueing. But perhaps we shouldn't be surprised as only a very thin smear of oil is commonly applied, or in the case of wax sometimes just a wiggly scribble down the centre.

The reason to do something to the sole is as mentioned to lubricate.

As commonly stored, the sole of a woodie or a transitional would not be subject to taking on or losing much water vapour because it would be resting on a solid surface.

1 Clear evidence for this in surviving planes in very good or untouched condition.

2 Oiled with linseed oil or 'sweet oil' (possibly whale oil), greased with tallow or something similar, or waxed using beeswax.

Not the answer you're looking for? Browse other questions tagged plane tool-maintenance or ask your own question.

6
How do I completely disassemble a hand plane to clean it and then reassemble it?
19
How do you plane end grain?
7
Why would a plane have a grooved sole?
9
What should I look for when aquiring a plane second hand?
20
How does one aggressively sharpen chisels and plane irons when damaged?
5
getting edge of plane square to sole for shooting
3
Problems adjusting block plane
2
Can I use a 12” granite block for fettling a #5 plane?
7
Mouth of a Plane