How to cut long angled cuts without a table saw? 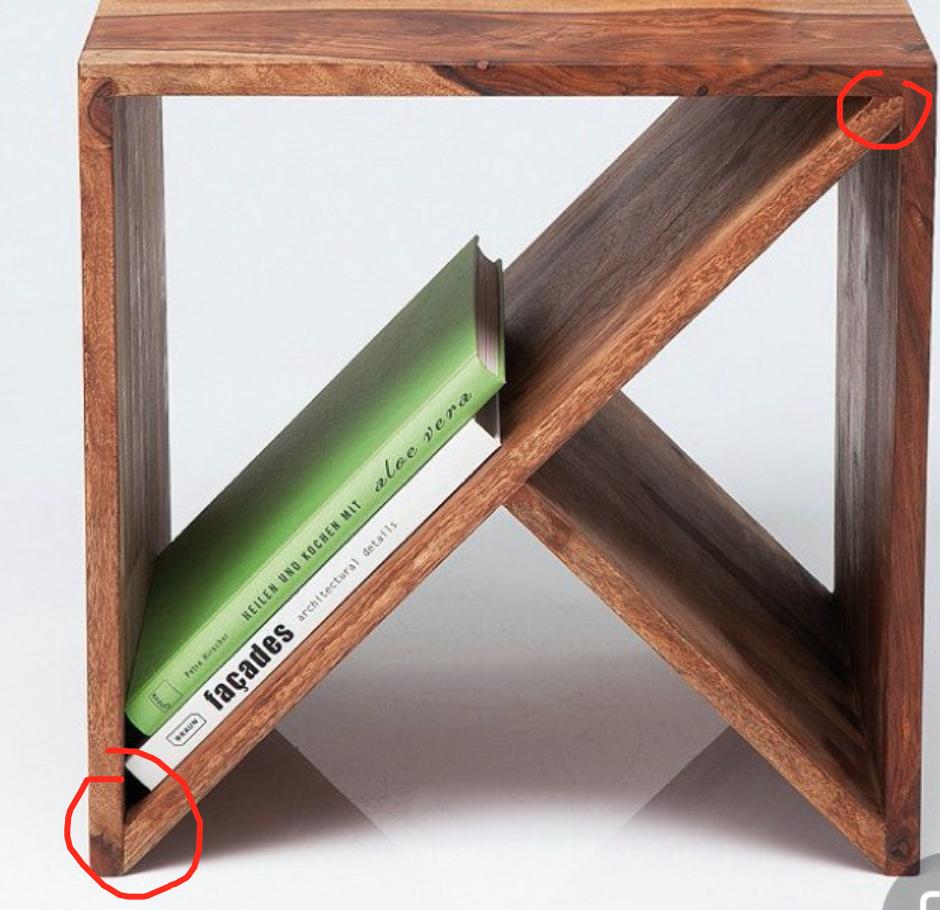 Hey guys, first time poster. I'm trying to make this simple nightstand using hand tools. I'm stuck on these angled planks. Is there any way I can cut these very long cuts without electric table saw? I have a few japanese saws I can do pretty precise cuts with, but I can't image cutting a precise, angled cut along the whole lenght of the wood here.

Cuts like this are actually fairly straightforward to do by hand, using the right technique1.

But even so, it would be rare indeed for any cut like this done in hand-tool woodworking to be used straight from the saw — the sawn end surface is nearly always going to be refined by planing, to both perfect the angle and get to accurate length2. This is good news actually since it means you don't need to be a well-practised saw user to get a good result. In other words the saw cut can be a little ragged and uneven and it doesn't matter :-)

And you can in fact do the entire job just by planing, something a few older guides suggest doing when working with thinner material. The boards in the pictured item would be thin enough to do the job this way. Although it's obviously a lot more material to plane off it saves what might be felt to be a tricky long crosscut — but to be honest if you're careful to saw on the waste side of the line this is not actually a particularly difficult cut3.

Either way arguably the key step to success here is the initial accurate marking out on the workpiece..... which is true of a great many things in woodworking.

The saw cut
If you will be sawing the boards to rough length first, before planing, it's important to realise you make a cut like this with the board held upright, ideally in a vice.

If you don't have a vice yet you may be able to figure out a clamping setup that will allow the board to be held securely. Or you could take the opportunity to quickly build a crude clamp-based version of what is now frequently (and inaccurately) called a Moxon vice. More options on this in this previous Answer. As you can see it covers a good number of options, including a clamp-based 'twin-screw' vice. Even quickly thrown together from a couple of lengths of 1x4 or scraps of plywood a vice like this is likely to still be much better than no vice at all.

Planing the bevel or bevels
There's a previous Q&A worth looking at, Angled cuts without miter saw or miter box?

1 The two key aspects being accurate marking out initially, and then careful cutting on the waste side of the line with the board upright.

2 Even regular 90° crosscuts are generally done this way, and this is why a shooting board is virtually a must-have for anyone woodworking with hand tools.

3 Even the first-timer should expect to do it successfully as long as they don't rush and keep to the waste side of the marked line on both sides of the board..... so stop frequently and check the opposite side of the board to the one you're facing as you saw. Remember, cutting wood is not a race so it's fine if it takes longer than you think 'it should'.

Mitered cuts this wide are not necessarily sawn in hand-tools only methods of work. They're almost definitely shot on one of the shooting board types though. The idea is to remove bulk of the waste with a tool that can move lots of material quickly, so for example you could knock it off with a chisel leaving somewhere around 1/8" - 1/16" of waste and then planning to a line with a fine set plane, with or without some sort of a fence guide. A combination of rip relieve cuts and cross cuts works too. I guess the tricky bit would be making a long and accurate guide without power tools. If that's the case, careful freehand planing with frequent bevel gauge checks could do the trick.

Also, it doesn't have to be 100% spot on across the whole length, only in the places where it shows. These joints are end grain mostly and should probably be reinforced, I personally wouldn't worry if the angle is not precise as long as the visible joint lines are tight.

21
How can you make a square without a square?
5
What tool can cut thin wood or acrylic/plexiglass without melting it that is suitable for NYC apartment?
6
How to make bottom face of beefy table leg flat and square with sides
5
Are mortises with angled walls cut the same way as square mortises (handtools)?
9
How does Frank Klausz achieve a >90 turn with a turning saw without cleanup when cutting dovetails?
5
Precise 90 degree cuts on small pieces
1
Tips and Ideas for Hand Planing a 11,950 N board keeping it simple
4
How to make a mitre cut along the width of a board with hand tools
2
How to saw wood without the final splitting?
8
Angled cuts without miter saw or miter box?