Hopefully this is the right exchange for this.

Recently I started a DIY desk project in which my goal was to build a ~8ft long desk that could support a large load (~150-200lbs).

This desk would serve mainly as a place to setup all of my computers for gaming as well as double as an office space for work.

I finished this by hand sanding with 220 grit and applying three coats of Minwax wipe on water based poly, sanding in between coats 1 and 2.

It came out perfectly and I was quite pleased given it was my first time doing anything like this. 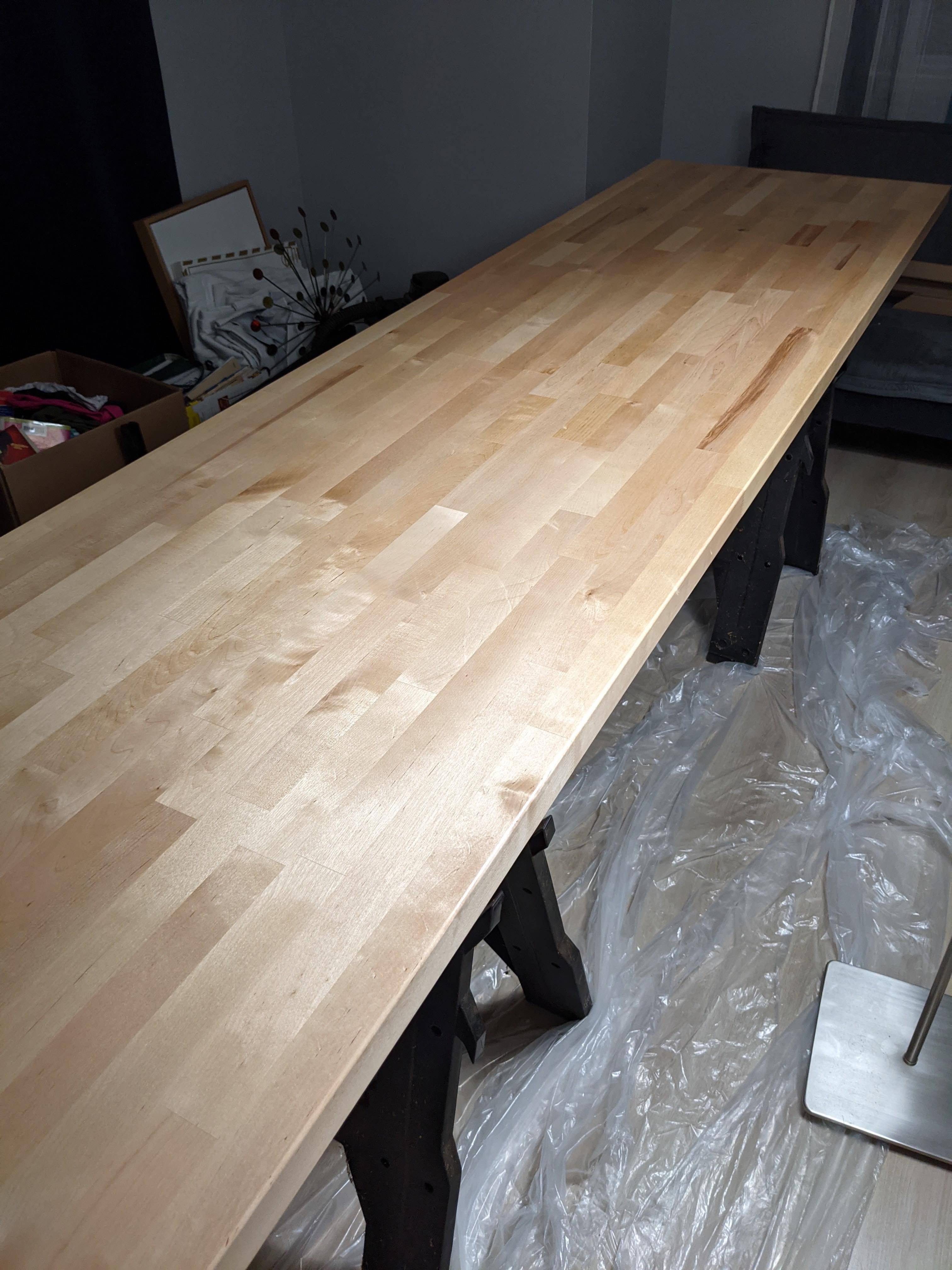 I decided to take a gamble and buy a Simplified Building Z-Frame Table Kit. My thoughts here were that it could support the center and obviously handle a ton of weight. Being galvanized pipe I also figured I should be fine using it outside if I ever wanted to replace the table top and convert it to an outside table in the future. 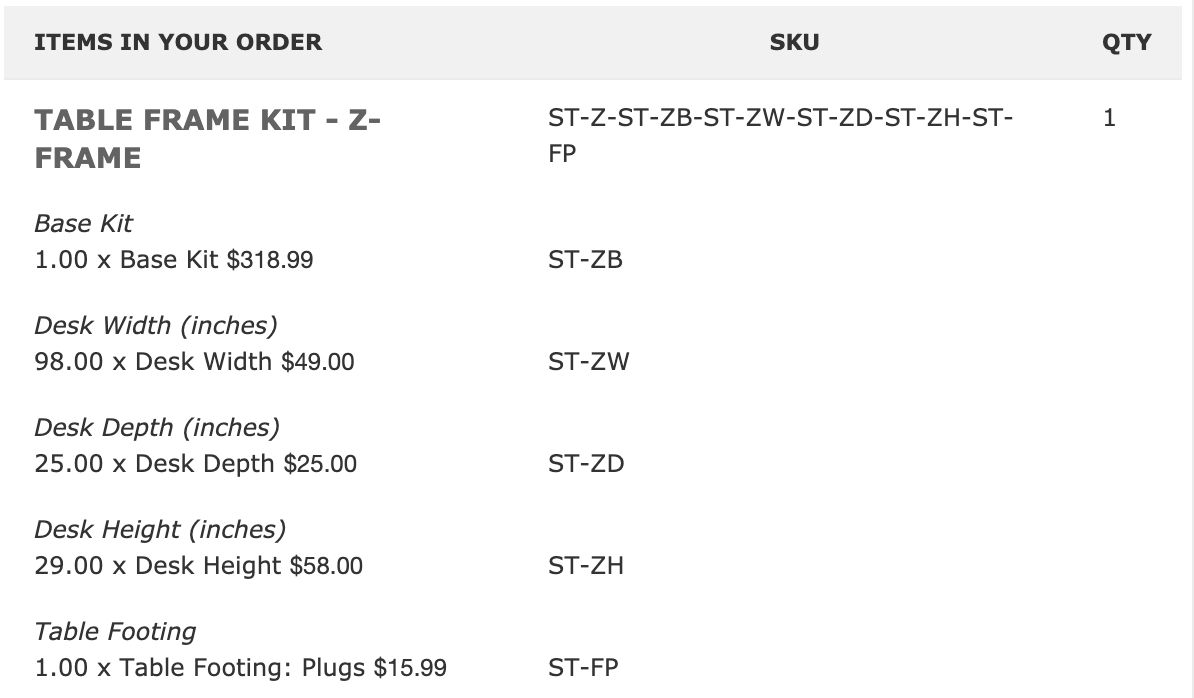 The kit came in and was easy to assemble, however I am now stuck as it appears the legs don't actually align properly to the corners 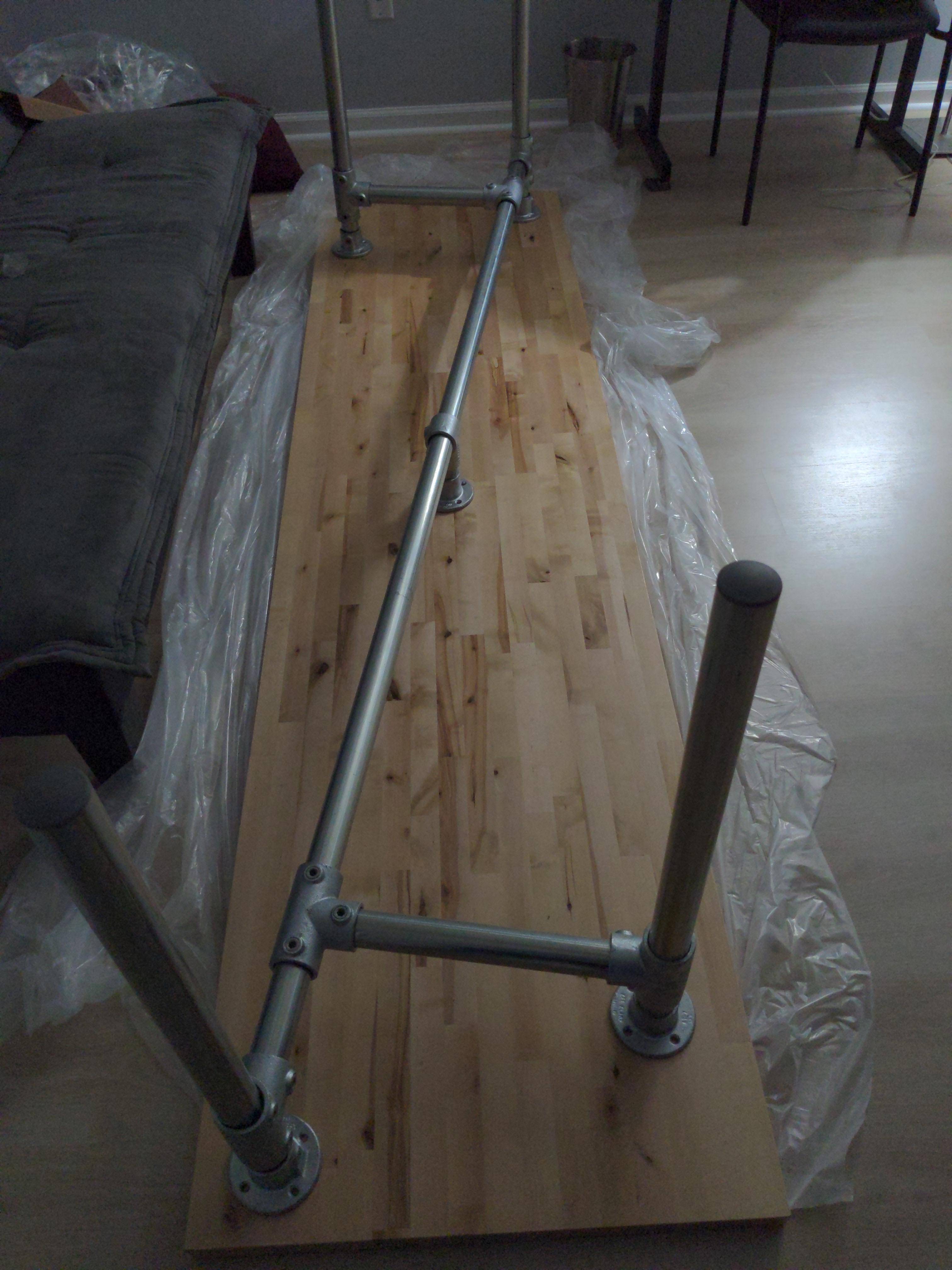 I can't seem to figure it out given that the documentation matches what I have, but images they provide have a perspective that show the legs aligned to the corners.

I have two questions really:

Any help is appreciated!

I received a response from Simplified Building, it turns out that the dimensions of my table break their formula for the Z-Frame.

They also described what was mentioned by @Graphus: move the depth legs further down the length pipe. It turns out the width of my table would require the fittings to overlap around 1.5". 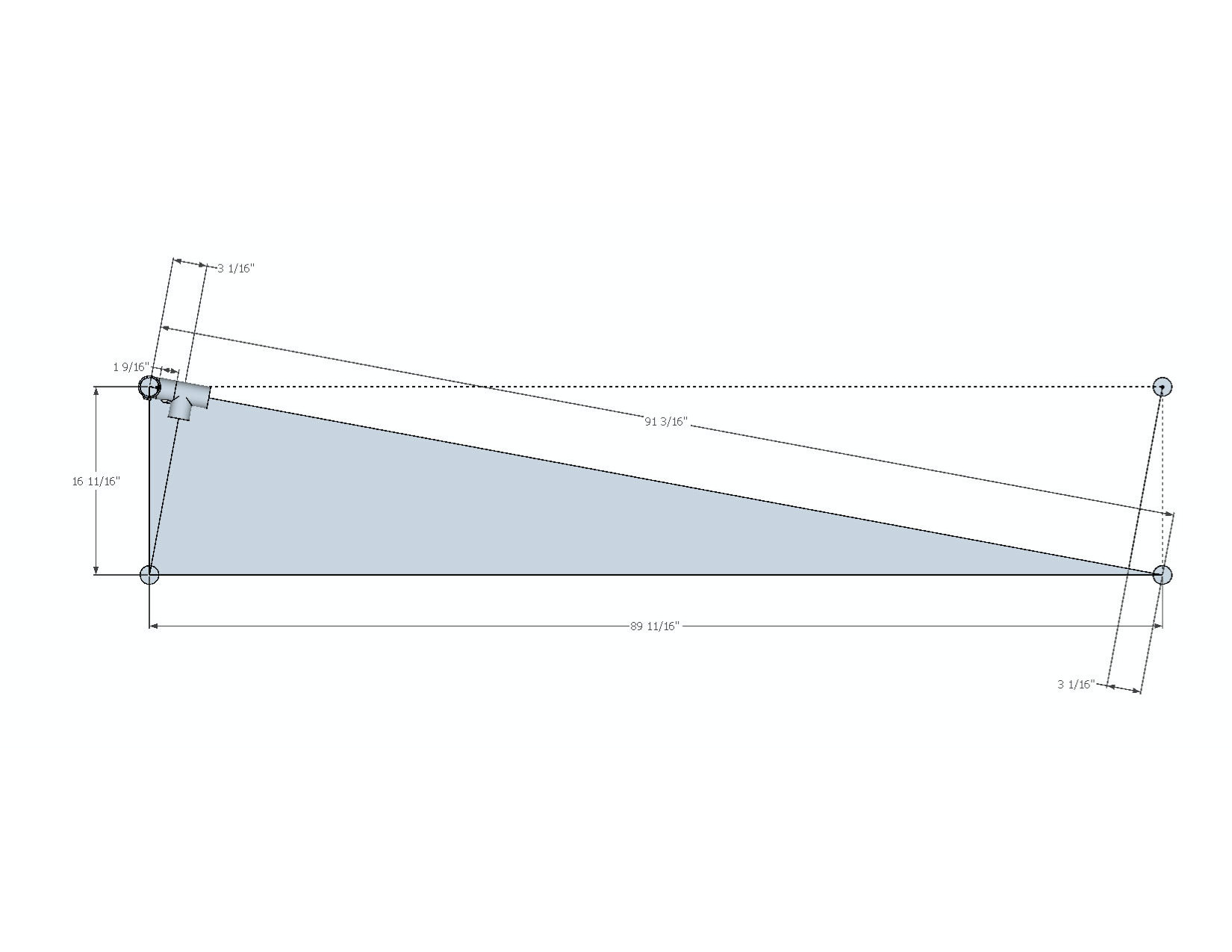 They suggested that I convert this to an H-Frame and sent me new pipe. This also had the added benefit of providing more leg space, something I didn't think about, but some folks mentioned might become an issue, so I lucked out there! 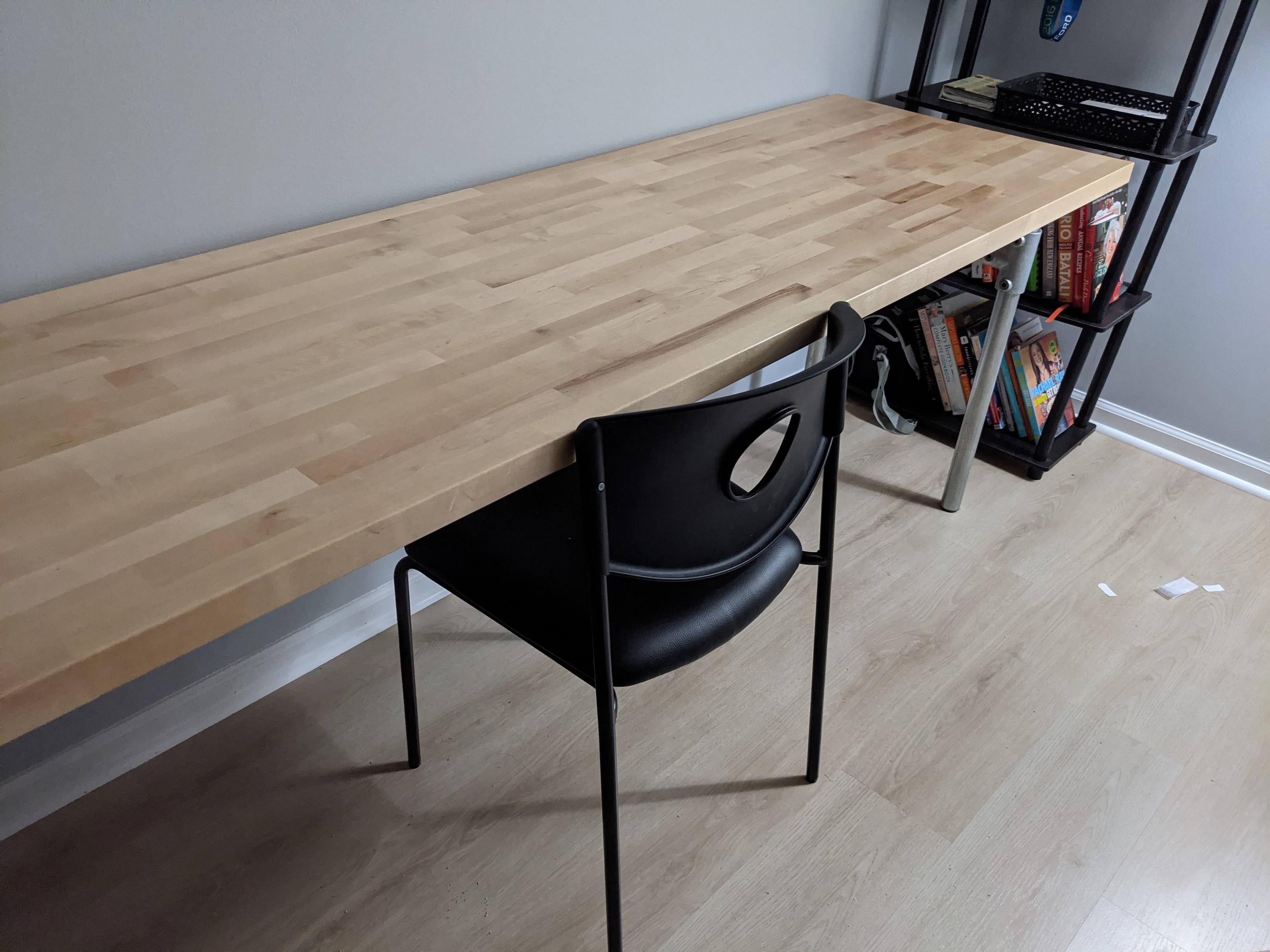 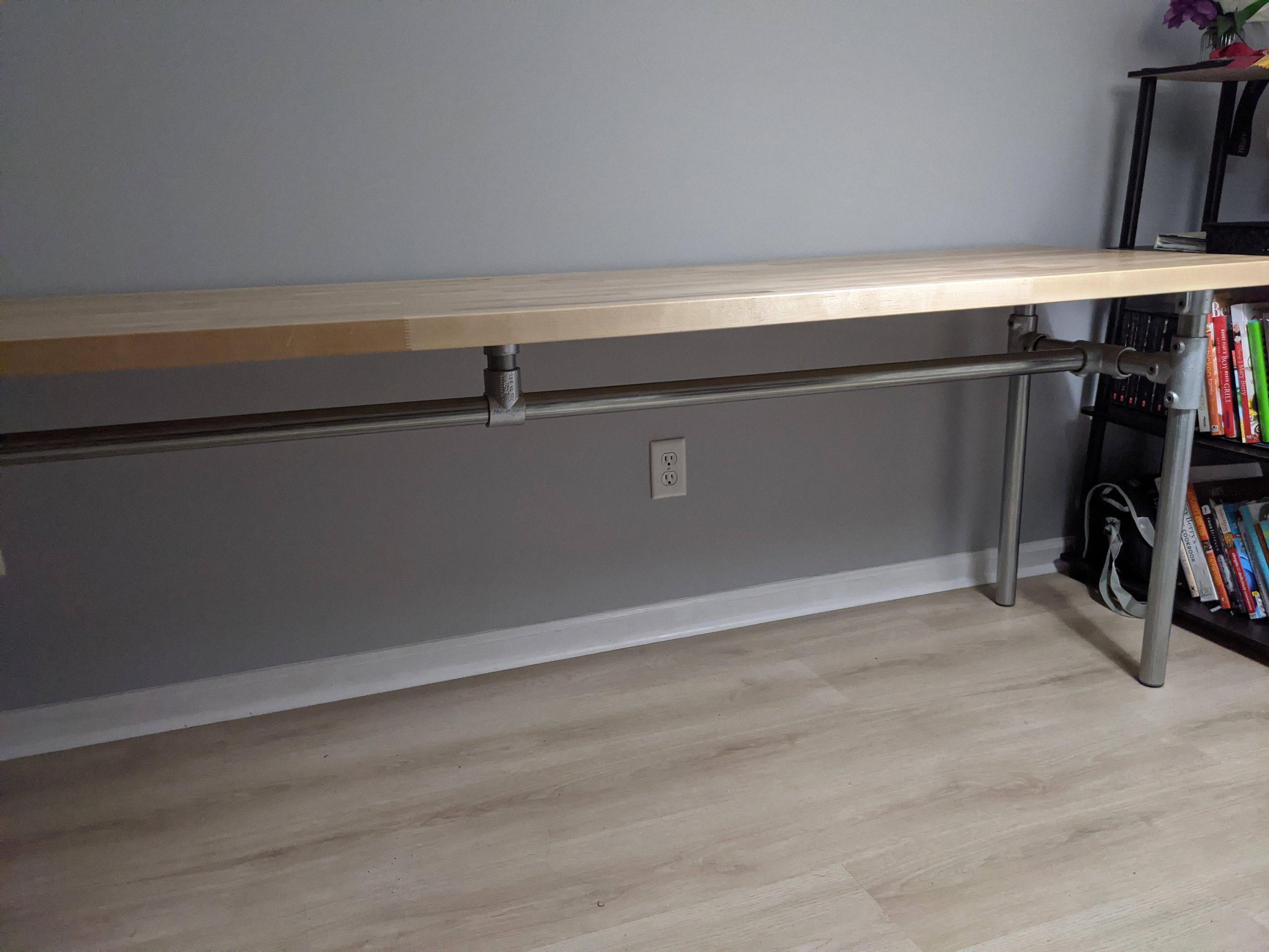 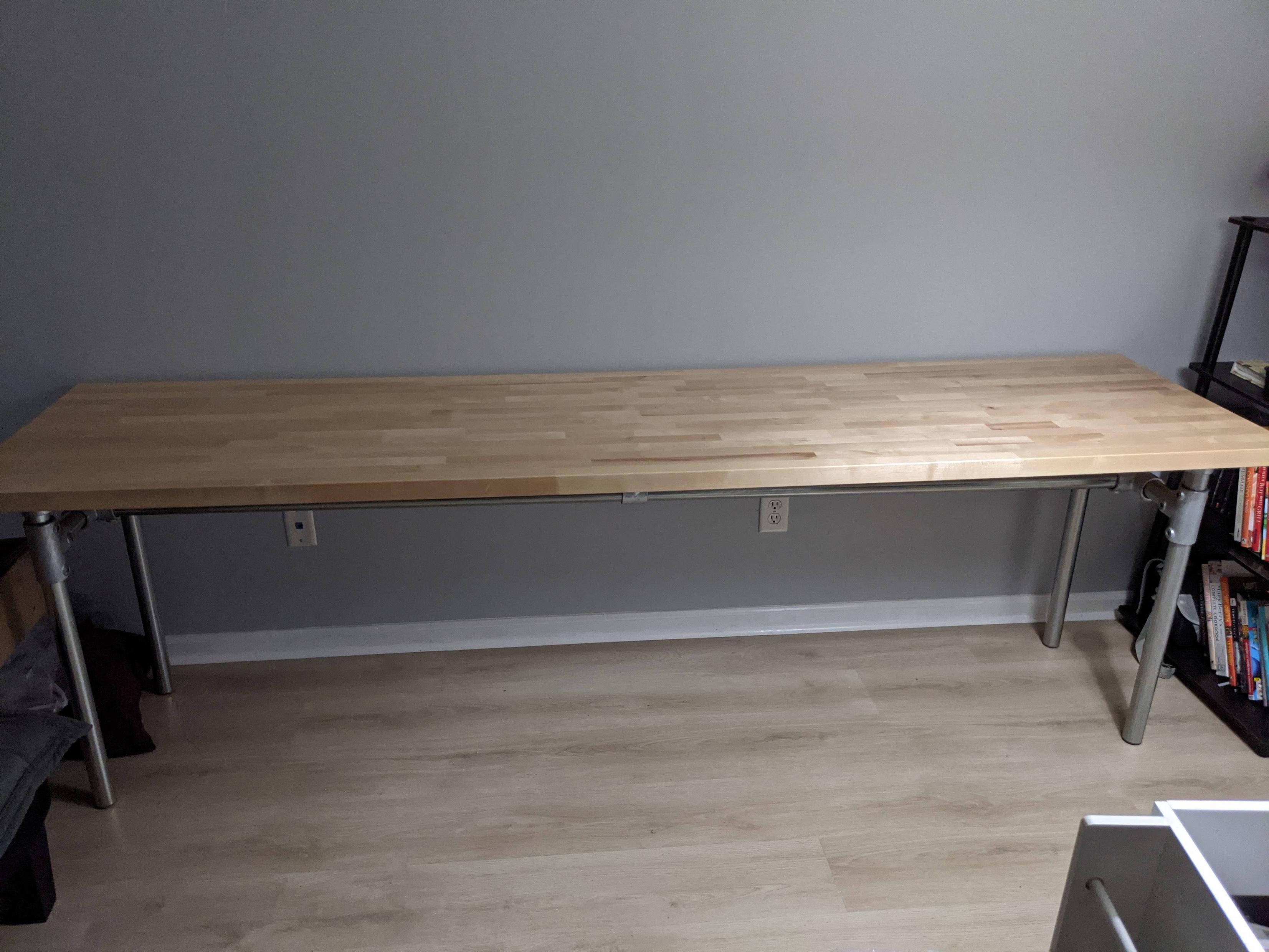 If I were to fasten this right where it is, will I have any sort of structural/balance issues?

Nope. If the table were much smaller it might, but the wide stance of your table means even the two legs well in from the corners aren't going to impact stability in any way you'd notice.

Is there something I am missing regarding this frame kit or a Z-Frame in general that might be impacting my ability to align these?

It's not clear if the position of any of the connectors is variable or fixed. If it is variable you could try moving T-connector for the "outrigger" legs' right out as far as they will go on the long pipe. A quick back-of-an-envelope sketch suggests to me that this won't quite do enough, but this sort of thing is hard to do visualise without actually drawing it accurately. So if there is adjustability doing this is worth a try.

You didn't ask about this but I wanted to include a note on it.

For future reference, Woodbin's The Sagulator will be your friend.

Do realise this is based on textbook values (and all wood varies, all the time) but the numbers it provides are a very useful starting point. Err on the side of caution and you're unlikely to run into a problem.

Thick glued-up workbench material like this, as it's made from hardwood and has all those glue joints, isn't anything that can be directly predicted by software because even more than a single-piece board no two pieces are going to be quite alike. But in practice you'll find panels like this are really amazingly stiff, and very resistant to deflecting even with quite a sizeable centre-only load.

Your wood desktop looks great and should serve well. Nice job. It's thick enough that as, @Graphus said, it should not sag by any noticeable amount. The construction of many glued up boards should minimize any seasonal wood movement. If you're concerned about that just drill out the flange mounting holes or buy screws sized such that you end up with the mounting holes about 3/32 - 1/16" larger in diameter than the screw shafts. You still tighten and lock them down as usual but, that extra difference in diameter will easily compensate for wood movement. A "Vix" brand or generic hinge self-centering drill bit will keep the holes in the bench centered on the flange hole diameters.

Are you at all worried about bashing your knees on the "Z" brace near the ends? That was the only thing that caught my eye. If you're good with the brace location, then as @jdv said "build it." The staggered layout will cause no problems but it would have been nice if they had explained this layout for your size top, before you bought it.

Looking at the photos, I'm not sure if there's ANY adjustability in your leg kit. However, it looks as if you shortened the "Z" brace (cut it yourself), you could move your legs inboard more. WHY? Well, if you're not comfortable with the staggered aesthetics of the legs, this might conceal them a bit from an end view. With your wood strength, you can easily hang 18"+ over each leg end with no weight issues. This may even give you easier access to each end from a chair sitting position.

If you're worried about the brace or knee bashing, I've included just a couple of links for some of the woodworking sights that make some alternate bench top leg options. In case you decide on returning the leg kit for something else. I am not advising on style in any way and I am not recommending any particular vendor. These are just what my search turned up for alt. kits that would work for your top.

Many sites such as Rockler, Woodworker Supply, Lee Valley, Grizzly, Woodcraft, Highland Hardware and many, many others offer products for supporting a big thick slab that long. Again nice job.

I'm a little late to the party, but if you don't like the z, you could flip the assembly thusly and give yourself more knee room. 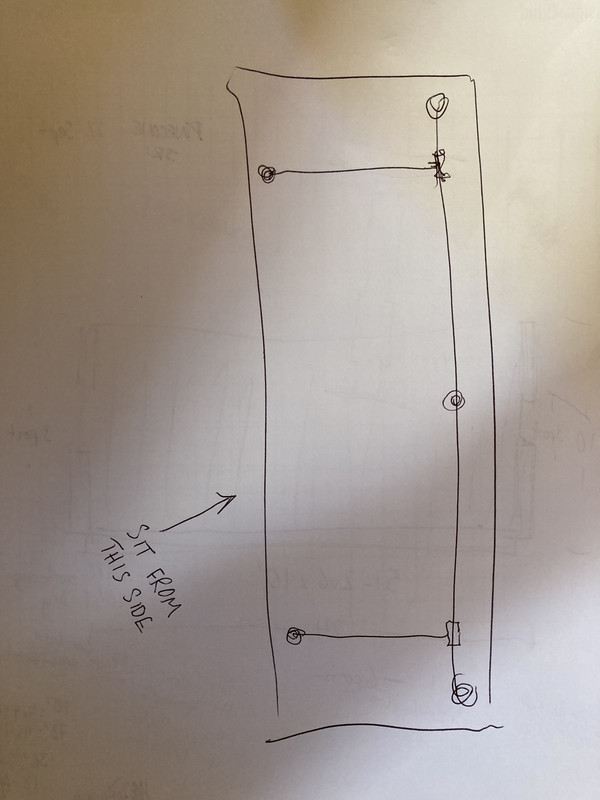 (Edit) Credit to @Graphus for bringing up this point: the original diagonal might be too long in this new configuration. The most straightforward fix for this would be to use a hacksaw (or a reciprocating saw, if you’re lucky enough to have access) to cut one of the longer pipes a little shorter.

Not the answer you're looking for? Browse other questions tagged tabletop or ask your own question.

1
Attaching t-slotted channel to the underside of a desk top
2
How can I fix this wobbly desk
3
Is wood-glue enough or should I use extra support?
2
Reusable Desk design: how to join pieces?
2
How might I fix wobble in my studio desk build?
3
Designing legs for large larch tabletop
2
Planing to correct cupping in panel (desk top)
4
Aligning Table Top Veneer With Solid Wood Frame
3
Support needed for "butcher block" cart top?