I want to start working on my first woodworking project: a plant stand. It's quite a large project (for being first project), but my neighbor has worked on some projects and he can help me to some extent. I sketched up the project purely based on what I want it to look like after watching a few woodworking basics YouTube videos.

It's made from 2x2, 2x4 and 2x1 and I was planning to use standard grade pine. My plan is to use pocket holes + screws for all the joints except the 2x1s; the 2x1s would be nailed on the respective base members. The total height is 6ft, the width is 48" and the depth is 16". It consists of 2 types of sub-assemblies: once base stand and multiple insert racks that just sit on the 2x4 members of the base stand and are held in place by weight of the plants + the locking 2x2 members on either ends (I would need to rotate these insert pieces to pass them through the base stand during assembly)

Here are some specific questions I have:

Is there any design flaw I am missing? 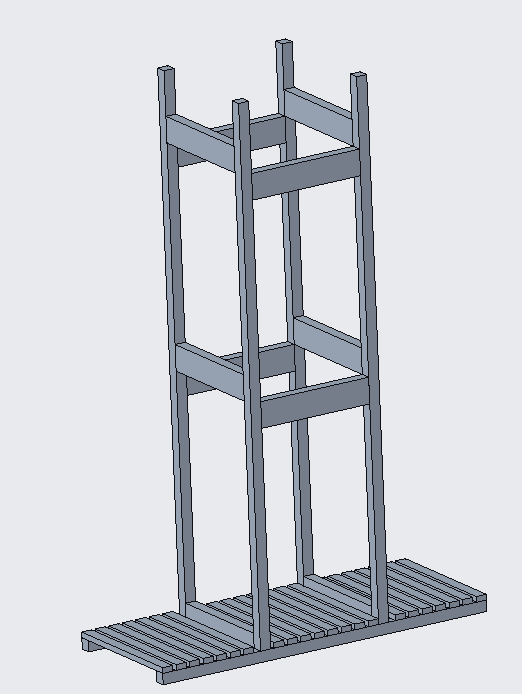 Close up of base joint: 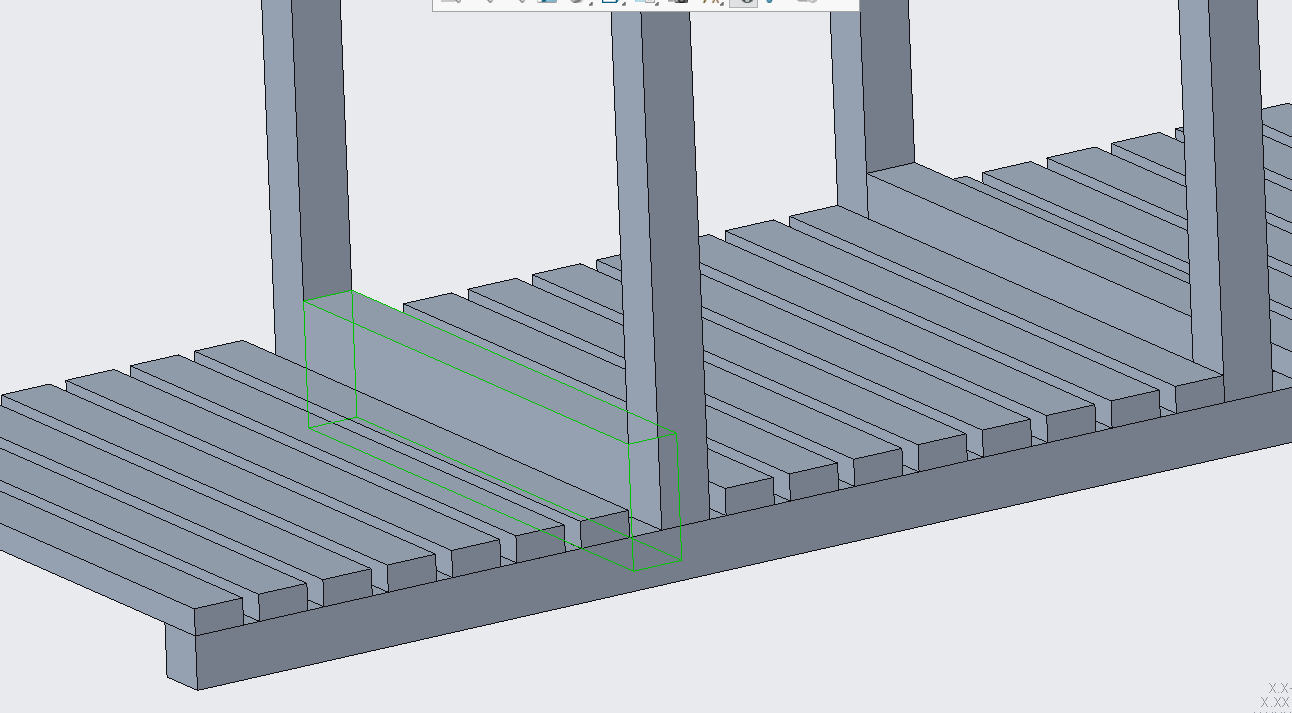 With an added, mid-level, rack: 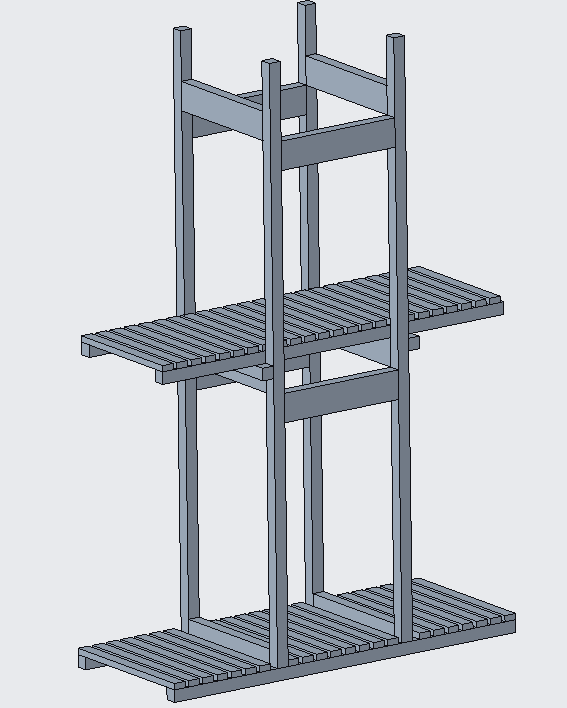 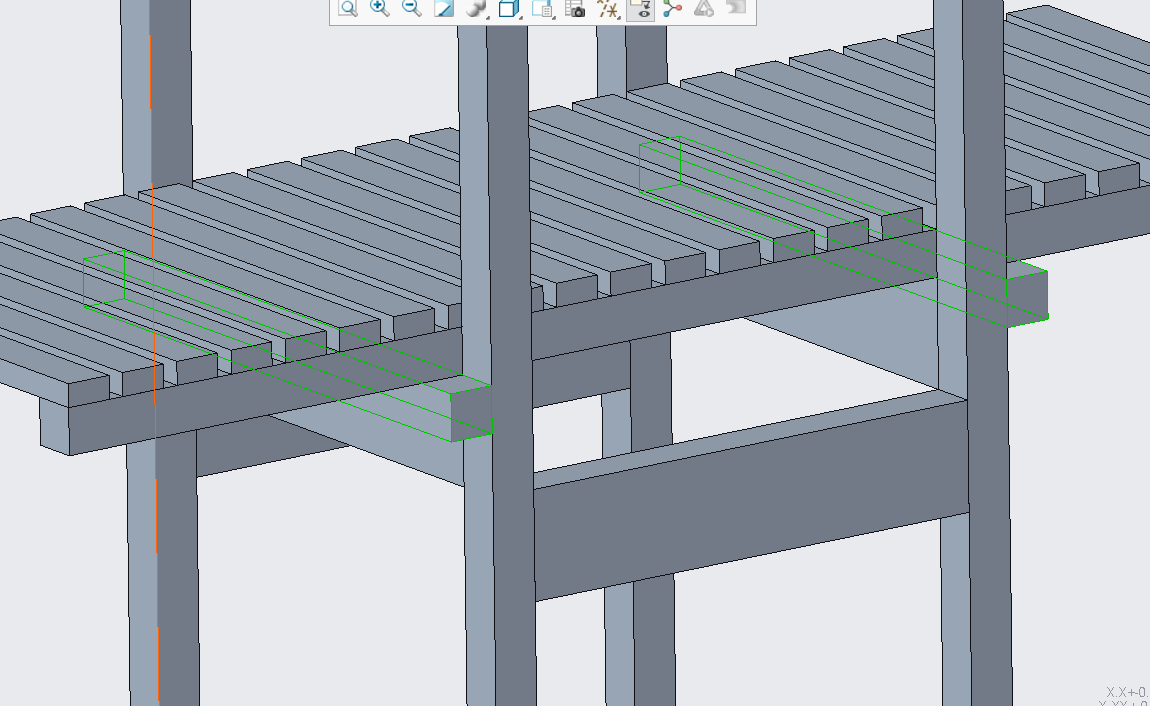 If you use pocket screws for all the major joints here you don't have to have any particular worries about strength, they are very very strong if everything is done right1.

Since this will see exposure to some weather (and the water from watering the plants I guess) be sure to use exterior-rated screws in the pocket holes.

How do I prevent it from tipping over?

Sufficient weight on the bottom platform will make this bottom-heavy so I'd expect this to be pretty stable, especially if positioned alongside a wall normally when it's not indoors. Since it's tall a particularly high wind could still topple it of course, unless temporarily secured to the wall by a length of chain or strapping when outside.

The base joint where vertical 2x2 piece joins the horizontal 2x2 is weak in my view. I was thinking of adding a 2x4 cross member (see zoomed picture) that attaches to both 2x2 pieces with pocket screws.

I'd definitely go with 2x4s or even 2x6s there for strength and stability.

Additionally, I was thinking of using corner braces at this joint

I'm not sure what you mean by corner braces here, but by all means add something2 to give increased rigidity here if you feel it's needed. Rarely a bad idea to go stronger than you think is necessary in woodworking, until you have more experience and can better judge what's strong enough in a given situation.

Follow-on query from the Comments:

Any tips on selecting wood type? I assume pine would be easiest to work with for first project?

Actually as odd as it sounds pine might not be the best wood type to start with, since to begin with you'll be buying "pine" from most common sources — it may be called pine but will be generic SPF (spruce/pine/fir) and you can be getting anything from those families depending on where you are exactly, and what's in stock at the moment.

Even the size of the pieces you buy can change the species you're getting, from the same source. Larger boards are often a better wood simply because they have to come from larger trees, so they be cut from a better species (e.g. southern yellow pine).

In addition, this type of wood is usually poorly or only partially dried, because of the original intended use for the stuff — rough carpentry.

So be aware that milder hardwoods are essentially easier to work with overall, and almost always will be seasoned better. Poplar is a decent choice for the US since it's very widely available, cheap, quite soft and easy to work. Soft sounds bad but it's uniformly that hardness, not hard/soft in layers like in softwoods which have hard latewood and soft (sometimes very soft) earlywood bands.

1 Independent testing has shown that pocket-screw joints can actually exceed the strength of traditional M&T joins. There are worries they won't maintain this strength in the long term, but for stuff that isn't intended to endure they're one of a number of very suitable alternatives to traditional joinery.

Not the answer you're looking for? Browse other questions tagged strength butt-joint timberframe or ask your own question.

4
Supporting a level box on an uneven surface
1
How should I affix and refinforce these butt joints?
2
Is this frame design sturdy enough for a window seat?
4
90 degree butt Versus Pocket screws for cabinet with legs
4
Pocket Hole Butt Joint
0
How to build a stable heavy bag stand for kickboxing?
0
Butt joints on both sides on the same piece of wood
0
Reinforce glued butt joints?