Is rotted wood used in the construction of a dresser going to cause issues in the future?

it is on the back of the dresser on the corner 2x2. It is about 3 inches long and 1 inch. There is no finishing in that part of the hole. 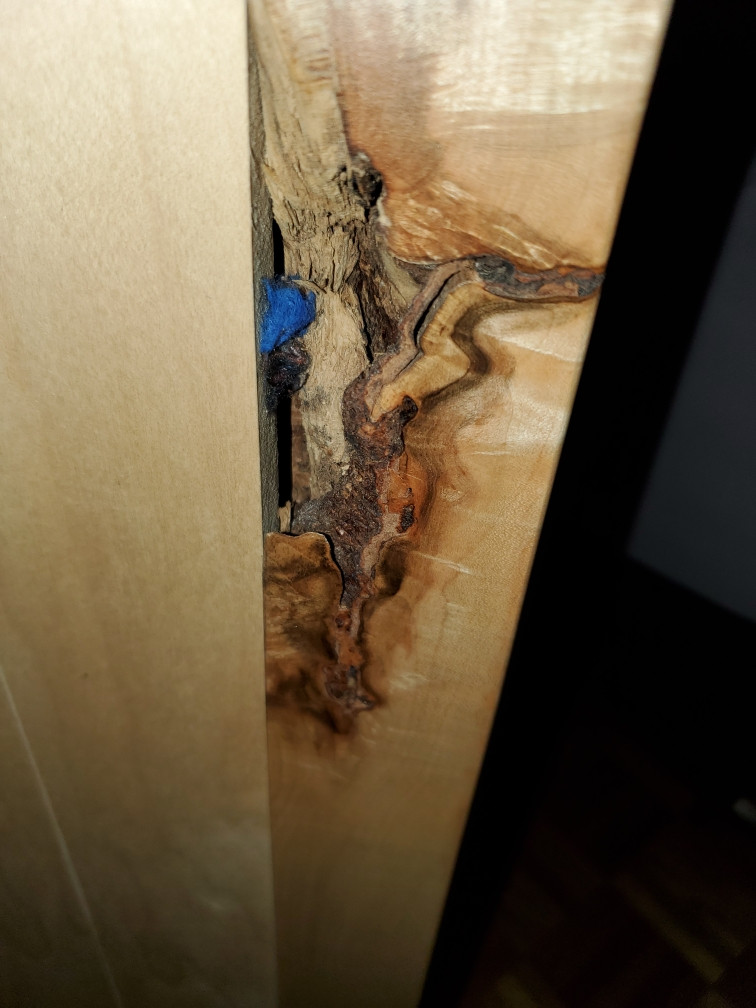 That's not rot, it appears to be a small section of 'live edge', i.e. the original surface of the tree, or possibly the former site of a large, irregular knot which is no longer present. Either way it's basically nothing to worry about.

Since the wood appears to be maple1 this could also be a bark inclusion2, which is something maples are known for more than some other species.

It may seem careless or slapdash to leave something like this without doing something (I guess the most obvious thought would be filling it) but you tell us it's on the back, and as odd as it sounds there's actually a long tradition in furniture making of using rougher wood, and even pieces with defects, for surfaces that aren't usually seen. Even some quite fine furniture from the past could have very rough boards hiding at the back, or inside the carcass. Now, as then, it makes good economic sense to use wood that isn't suitable for show surfaces for parts that aren't visible in normal use.

1 Quite characteristic to experienced eyes once it has finish on it.

2 What happens is that sometime during the growth of the tree something happens that causes a small section of bark to be left behind and completely encapsulated it the growing wood. If the tree is sizeable when felled these bark inclusions can be very deep inside the trunk.

Not the answer you're looking for? Browse other questions tagged furniture or ask your own question.

9
How thick do slabs need to be in a slab bench?
8
Type of wood glue-up used in some Ikea furniture?
8
What are strong methods to secure a stripped wood screw in hardwood?
2
Load Bearing of Legs and Wood Movement on TV Console
7
What is causing this poor refinishing result and how do I fix it?
5
Best way to attach metal legs to corner desk? Do I need extra support?
2
How can I fix this wobbly desk
3
What is the minimal spacing between edge of leg pommel and mortise and tenon apron (intersected by tusk tenon)
3
Wood movement with L-shaped mitred leaning shelf
3
How to achieve a rounded edge on a thick panel of solid, hard wood