How did I bend this router bit? What safety or operating step did I miss?

I turned on my compact router with a tongue cutting bit installed. Immediately after I hit the on switch I heard grinding noises and felt the router try to wobble out of my grip. I turned off the router as fast as I could and to my shock and horror saw the bit was making contact with the side of the base. I was holding the router in the air when I turned it on, and I feel extremely lucky I didn't end up in the hospital.

I need to have a better understanding of how this happened and what I did wrong before I will be comfortable using a router again. My googling hasn't yielded any results and I was hoping somebody here might have an idea. 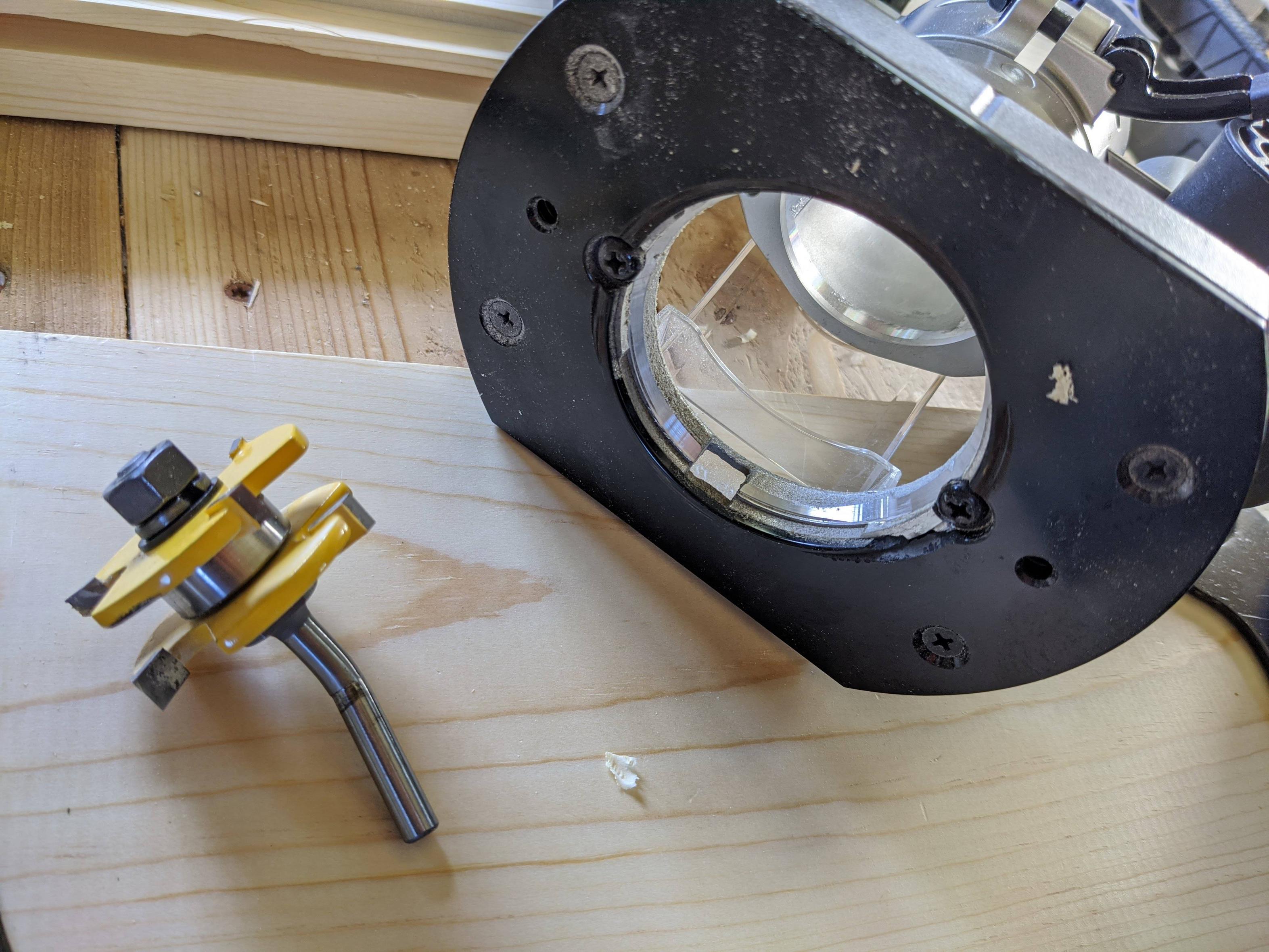 EDIT: After reading @blacksmith37 's comment. I put the offending bit in a vice and used a socket wrench to try and bend it. It bent easily and eventually snapped. video 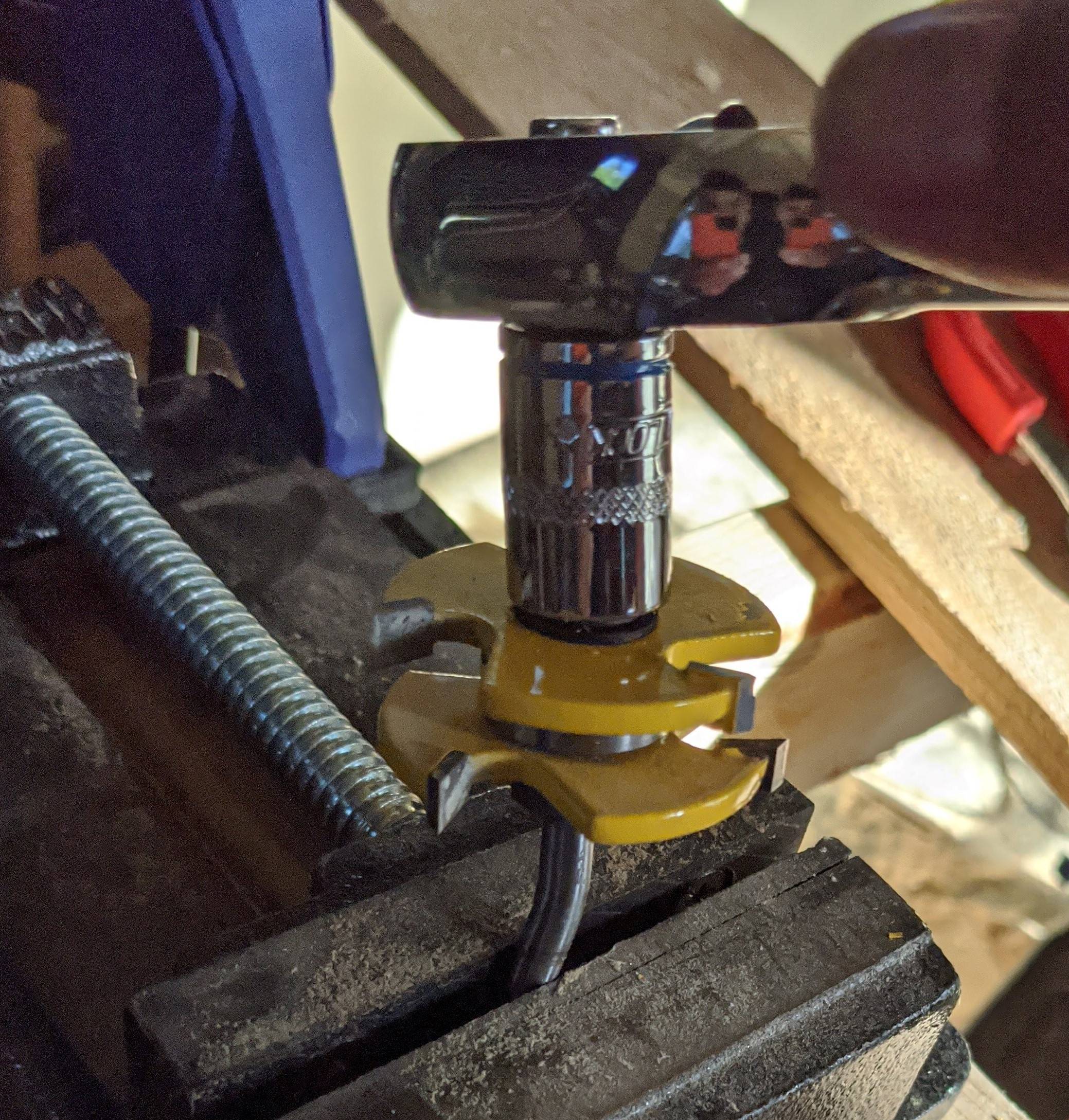 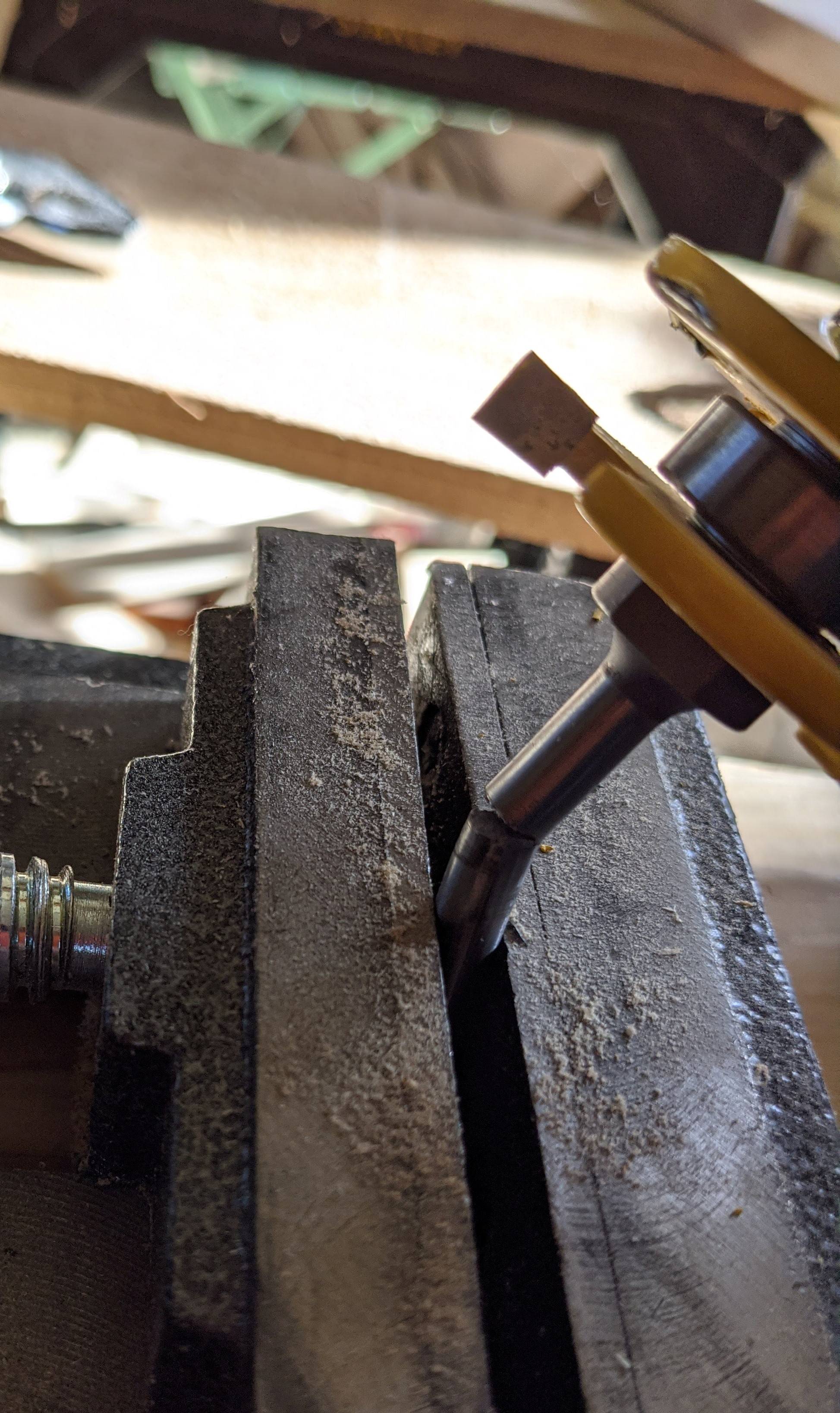 According to this chart from Woodcraft, you were probably in the correct speed range for that bit.

The real issue is that you are asking too much from a 1/4" shank router bit of this type. You'll notice that all of the reputable vendors (CMT, Whiteside, Freud) all use 1/2" shank for this type of bit. Small routers have their place, but this type of work isn't it. Look for a bigger router that takes both 1/4" and 1/2" bits. A fixed base router such as the Dewalt 616 of 618 would be a step in the right direction.

The low strength of the shaft as shown by the original failure and subsequent bend test, shows that the shaft was never hardened . So do not use this brand either because of poor quality control or poor planning. A shaft like this should be "hardened" , roughly to Rockwell C 35. This is about the hardness of socket or end wrench.

Same thing happened to me yesterday. How I ended up here.

I was cutting out a 1/8"x1/8" groove. I only mention that, cause no way it was stress. Barely using the bit. I hate 1/4" shanks, after yesterday, I know even more why.

Same router as you. Nearly the same setup.

I was using the battery operated version. 3ah battery. Always in it. It runs low I charge it. Do other stuff for 15 minutes. Just keeps the compact compact, only reason I've always followed that.

Ran a bunch of practice cuts. Ran two of the four doors. Got to the 3rd, battery died.

I ended up putting in a fully charged 6ah battery to finish the job. Popped it in turned it on and thought, in hindsight, wow that sounds a lot more powerful.

Found where I left off, ran about an inch, and POP!

I bought a cabinet door. Happened to be working for an engineer on this job. He is convinced, I am too, it was speed and heat.

That new battery upped the speed somehow. Both 18v batteries. 🤷🏼‍♂️. But, that bend was heat and the bit getting just off kilter. No other explaination.

Happened to have a spare arbor. The one I bent was a whiteside. So, not cheap.

Got everything all set back up and knocked the speed down by half. Sounded about the same as the setup with the 3ah battery. Somehow that 6ah also doubled the speed, heated the bit, and it got just a bit off center and went out if control.

Just glad it was only wood that messed up. Keep those bits at low speed is my takeaway.

Not the answer you're looking for? Browse other questions tagged safety router or ask your own question.

10
What's the easiest way to line up a tongue and groove?
8
How to determine if a router bit is safe to use?
8
How do I remove a stuck router bit from a plunge router?
4
Can I chamfer/bevel the top of a post with a router?
3
Router, how make a deep plunge cut?
1
Handle cutouts safely using a router
0
Trim router - Arbor has small amount of play along its axis, is this normal? (DWP611)
1
Why does my router change depth while I work?