What is the difference between the jointer blade and the smoothing blade?

In The Anarchist's Tool Chest, Christopher Schwarz recommends buying a #5 bench plane with three irons as a first hand plane: a curved scrub blade, a flat jointer/try blade, and a flat smoothing blade. What is the difference between the jointer blade and the smoothing blade? Are they ground to different bevel angles?

What is the difference between the jointer blade and the smoothing blade?

I would have thought this was covered in the text. I haven't had the chance to read The Anarchist's Tool Chest but I would imagine elsewhere it describes the different ways an iron can be set up.

Are they ground to different bevel angles?

No it's not about the bevel angle, it's about the edge profile1. I'll post an illustration for clarify, but future readers please note these are just an example of how to profile various plane's irons, read on for more details. 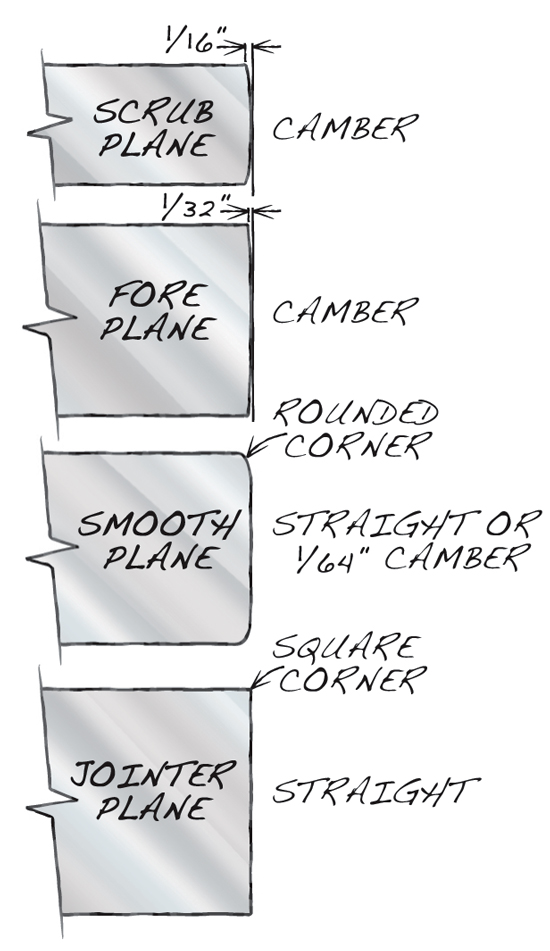 From 15 Tips for Sharpening by Tom Caspar on Popular Woodworking.

Smoothers
Smoothing-plane irons are usually prepared so that they are either straight, with the corners relieved (rounded off) which is how Paul Sellers shows how to prepare a no. 4's iron, or with a very shallow camber. A camber is where the whole edge is curved, corner to corner; don't confuse it with a cambered bevel, which is a completely separate thing.

Note that on a smoother's iron the rounded profile can be so slight that the two corners are just a few thou lower than the centre of the edge, meaning the curvature is barely perceptible to the eye when looking straight down.

Jointers
There is again no one way that the irons for jointer planes are set up, it depends on the tradition the user is following or was trained up in. Many older texts suggest that jointers should be the only bench plane where the iron's edge is dead straight, without relieved corners.

But many modern users have a subtle camber on theirs, as a means of squaring a non-90° edge by shifting the plane to right or left on the edge to take off the high side2, thusly: 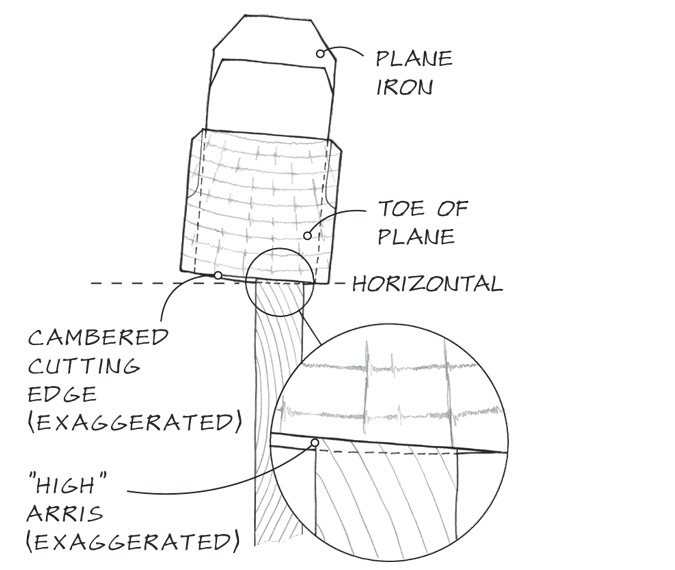 From Bench Planes: The System of Three by Chris Schwarz on Popular Woodworking.

David Charlesworth is a big proponent of this idea and has done a lot to promote the idea in his teachings and writings. Also note he has a few videos on YouTube that are well worth checking out, and you can see the man himself demonstrate the now-famous "Charlesworth ruler trick". 3

1 Although it is possible to use different bevel angles on planes for different purposes, it's quite normal to use the typical/usual 25-30° for basically everything.

2 These days it is sometimes said that this is the only way to do this, but that's misleading of course — the woodworkers in the previously mentioned tradition obviously were (and still are) able to square their edges just fine without a cambered iron!

3 Although he did not in fact originate the basic idea, nobody has done more to educate on how and why you might choose to do this.

5
How to flatten stubborn hollow on the back of a plane iron?

15
What are spokeshaves and what is their intended use?
8
What is the old-school way of smoothing a curved surface?
8
What is the difference between a dead center and a live center?
6
When is the ideal time to work green wood
2
How can I salvage the ura on my japanese plane blade?
1
Tips and Ideas for Hand Planing a 11,950 N board keeping it simple
5
Eclipse style honing guide changing blade geometry & preventing tight mouth setting on planes
0
Correct angle for a bull-nose rabbet plane (Record 76) blade
2
What are some good ways to finish smoothing a wood carving after you have the general form roughed out?