How to make a louver vent in a board?

I'm planning to make a couple of houses for owls and bats around my property to help control vermin. I've been looking on youtube.com at the owl houses and being one of those people who tend to go a little overboard with detail, I see all kinds of things I don't like. I saw one woman build an owl box where she designed the top with vents that would literally direct rainfall down into the box. I also saw lots of other things I didn't like, such as screws in the roof that will allow an entry point for water and many other things.

I'd like to put vents up the side, but I don't want rain running in. To accomplish this, I'd like to make them angle up into the box at a roughly 30-45 degree angle. I'd like to know the best way to do this. My first thought is to take a circular saw and set the angle on its blade. I'm not sure if mine is capable of that or not. I also have access to a table saw. It seems like it'd be simple to set the angle and cut a line, but how do you get the blade into the board? You can easily make and interior cut with a table saw or circular saw by setting it down into the board, but at an angle, it doesn't seem like it'd work the same. Can anyone tell me how to do this?

Again, these are just vent holes, probably about 5-6" long in a 1"x10-12" board. I don't want to make straight cuts and then add an angled vent on the outside as it won't last and will be a week spot. I'm basically wanting to add a few angled slots and inch or two apart. Thanks for the help.

Edit: Here is a mock up of what I'm trying to do. Let me know if it's not clear and I'll try to do better. 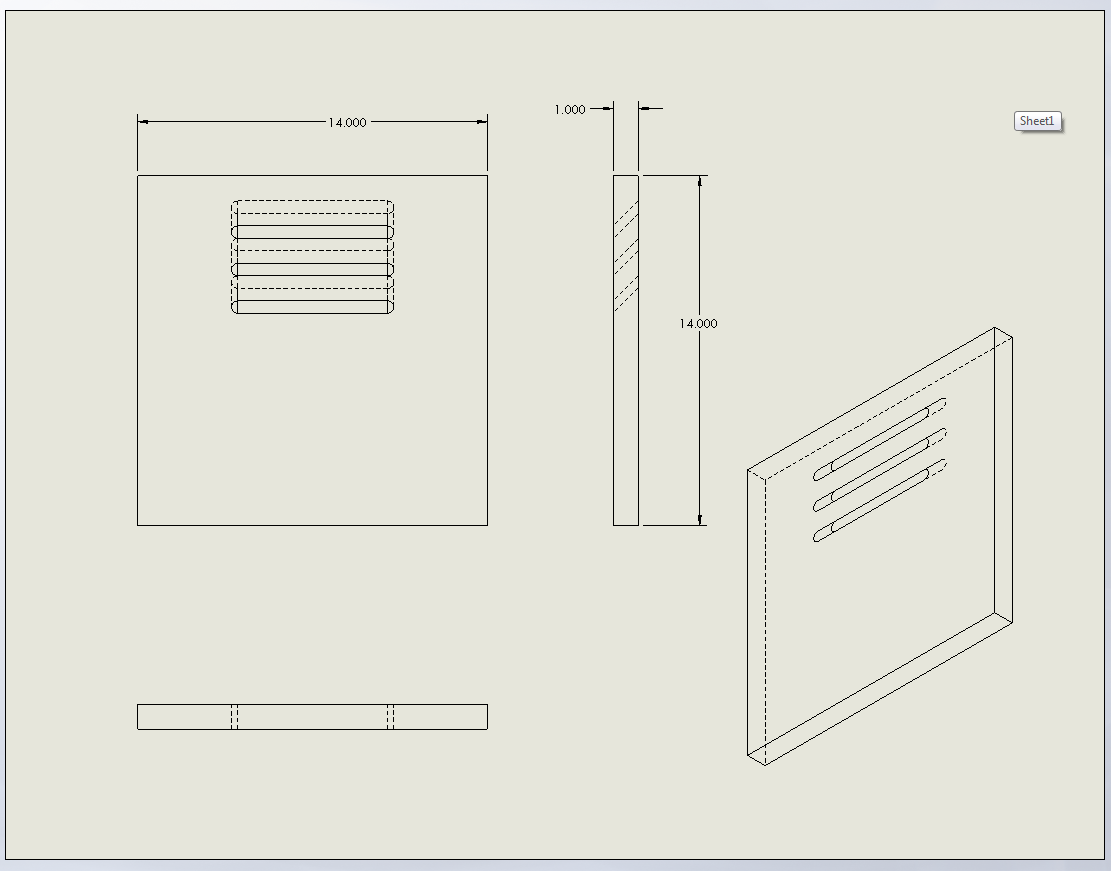 About the saw idea you have

Unless you have some sort of safe jig I would recommend against using something like a table saw to push the board onto the blade especially at an angle. I don't personally see a way that it is not dangerous. If the board kicks back you could fall onto the blade. (Sorry if I misinterpreted what you meant/intended. It just seemed like a bad idea)

Have the vent located on the side

If instead of making a contraption, like I will suggest below this, it occurs to me you could just cut the slats in from one side or both. Make as many as needed with the angled cuts on the table saw. Optionally you could glue a small board on the end to seal it. I think the blades are 1/8" inches so several of those at an angle should provide ample circulation. A just grabbed a junk board and cut into it with my mitre saw. Could easily do this with a table saw and some measuring. The picture on the right shows what it would look like "assembled" after it was cut.

Image courtesy of ME!

Make your own vent

This might be a little more effort than its worth but it is a possibility. There is another easier idea below the picture that might be more efficient for your application. The following is easier to do the larger the board.

If I was experimenting I would cut the hole in the board, with a jigsaw or something similar, where the vent would be and make a separate unit that I would insert into the hole.

To make that insert, use the table saw to make straight small boards that will make up the vent "slats". Then a small box the size of the hole that will house these slats. Depending on how big the house is you might be able to skip making a separate box and use the board to continue with the next step.

The box will have dadoes to hold the slats in place. You can use your table saw with a miter gauge, miter sled, or crosscut sled with stop blocks to cut the dadoes in the sides. I'm terrible at describing things. Look at this picture to get an idea. 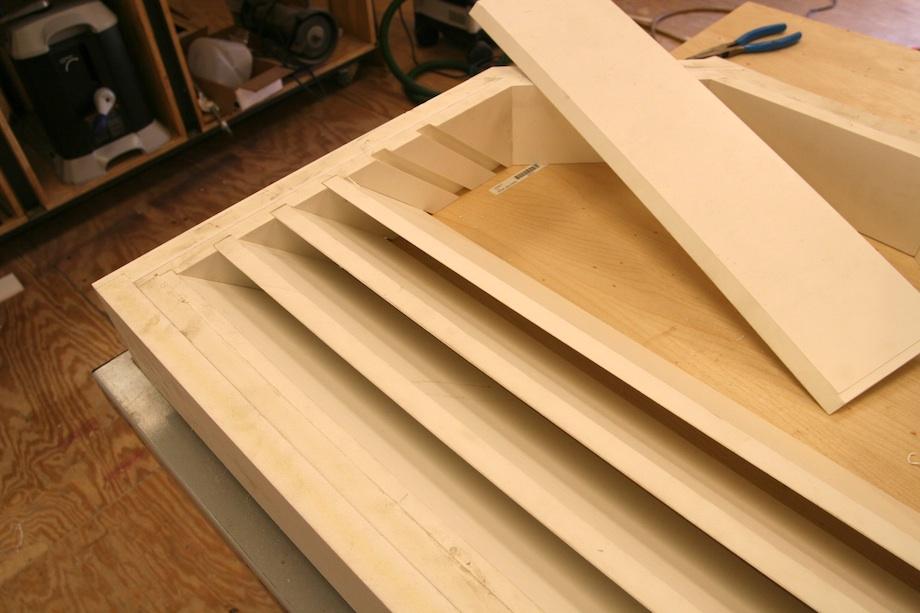 This picture is obviously for a vent on a house but the design should be very scaleable for a small animal house.

Another idea that occurred to me would be to find a garbage or cheap set of wooden blinds that could be easily incorporated into your board as well.

Matt's method is the preferred way of making louvres, but it is possible to make them in a manner similar to the method you originally described. You mentioned making plunge cuts into the middle of a board to cut louvres into a single solid piece of wood using a circular saw or table saw with the blade tilted.

You are correct to question the method you originally considered, because it would be unsafe to make a cut like this with a tilted blade. When making plunge cuts, the blade's direction of travel should be parallel with the blade's sides.

Instead of using a circular saw or table saw, you can use a compound miter saw. Set the bevel angle (tilting the blade), position and clamp your workpiece in place, then plunge the blade into the workpiece. Slide the workpiece over a little and repeat as many times as necessary to create a thick enough slot. Repeat for as many slots as you want.

But what if you don't have a miter saw and you still want to use this method? You make a special jig to hold the wood at an angle as you raise the table saw blade into it, but this wouldn't be very practical since the blade probably only raises a little over 3" high. That means you could probably only cut a few slots into a board. If you need a 12x12 louvre, you'd probably have to cut the board into strips, cut 2 or 3 slots into each strip, then glue the strips back together. This seems like a lot more trouble than Matt's solution.

Using any plunge-cut method with a circular-shaped saw blade will also produce some ugly results since the edges of your cut will have curvy angles at the two ends of each plunge cut, due to the shape of the saw blade.

Personally, I would accomplish this with a jigsaw. Nearly all jigsaw plates can be adjusted for miter cuts. Drill the ends of the louvre slots first, at the angle you want. Then, using a guide to keep the cuts straight, run the jigsaw down the top and bottom edges of each slot.

A router with a long endmill can do this.

Cut one basic vent slot straight down on a plank to be used as a template. Secure the template at an angle to your louver board and use a extended reach endmill in the router to plunge cut the vent.

OK, I hope my ASCII art skills are sufficient...

Not the answer you're looking for? Browse other questions tagged technique table-saw circular-saw or ask your own question.

6
Are drain holes in a wooden bird house necessary, and if so, what's the best way to make them?
7
How does one make a perfect circle on a table saw?
7
How do I look for a table saw blade with non-angled teeth?
11
How to cut Plexiglas on a table saw?
13
4'x8' length cut - circular saw, table saw, or panel saw?
2
Easy drawer joints for plywood
1
Cutting shallow-angle bevels with a circular saw - is it possible?
1
How to maintain a straight cutting angle with a tenon saw?
2
How to cut bevel lengthwise along rafter
2
How to mount angled shelves in a cabinet?