I'm new to woodworking and know very little, so apologies if this is an extremely basic question or I'm doing something completely wrong. Recently I've tried to sand away a few imperfections on a Snakewood pen blank I bought, using 220 grit sandpaper initially and following up with 600 grit. So far so good and I was able to remove the imperfections.

I'm not sure what this residue is but I would guess it is a mixed slurry of silicon carbide from the sandpaper and the wood the sanding shaved off. This is aesthetically quite displeasing so I tried getting rid of it. When I wet the blank it looks normal again but the white residue reappears as it dries, so I guess it is stuck in the grain of the wood.

So far I've looked up this issue on the internet and the recommendations range from washing down with a microfibre cloth (no effect), sanding further with different grits (no effect) to oiling the wood with mineral oil (again it looks OK when oiled but the white residue reappears as the oil gets absorbed) to using turpentine to get rid of the residue (again no effect, it reappears when the blank dries).

I've also had this issue before when sanding wood, especially when I'm only sanding part of the piece: when wet everything looks good but upon drying a white residue forms over the sanded area that is near impossible to remove.

Does anyone know concretely what this residue is and what is the best way to get rid of it? Thanks in advance for all your help! 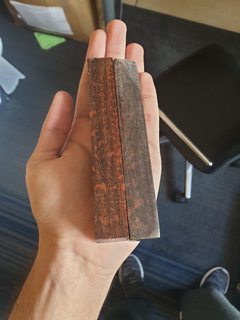 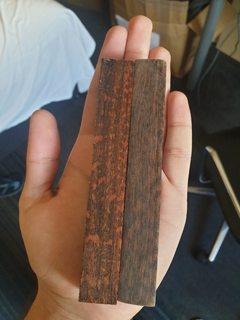 Light sanding (320) cleaned up my mess quickly. Surprised that wiping with mineral spirits didn't work. I did notice that areas of wood exposed to the wet slurry (next to epoxy) did show filling of wood pores, but I don't think that's a problem in my case--just not that noticeable. I don't know anything about snakewood, but I'm guessing that the wet slurry of water and wood dust was forced into the pores of the wood--can't imagine it went very deep.

Not the answer you're looking for? Browse other questions tagged sanding wood-repair refinishing hardwood or ask your own question.

14
Issue sanding between coats of polyurethane
2
Getting sanded poly slurry out of wood grains
6
Remove white paint from old wood fence
4
A beginner's question about sanding, stain, and polyurethane for a SMOOTH finish
3
Finding dents before the finish
2
Do I need to sand off old finish completely before applying polyurethane?
1
How to correct water based stain dried streaky
1
How to smooth out grain texture from shellac?
2
Sanding residue - how best to remove?