How to build a stable heavy bag stand for kickboxing?

I am trying to build a heavy bag stand. I am going to place it outside in the car shed (which is open from three sides). I am wondering what is the best way to give it a strong base. The heavy bag will weigh around 200 pounds, and it will swing back and forth in all directions. This is where the problem comes in. I can't just put up an upside down capital L kind of structure. It will fall apart. I will be kicking the bag too. I can't permanently attach it to the ground.

I want to know what is the best way to build this frame so that it doesn't fall over or collapse on my head. And I need to do it within budget. The structure I designed below seems stable enough on paper, but it would be a bit expensive. I think I am missing perpendicular bars coming down straight from the top and splitting the triangles in half. That would make it stronger, but again very expensive. I have no experience with woodworking, but I am very thorough in my work and I pay attention to details.

What other structures would provide the same stability (or would be better) without costing me an arm? Can someone give me some advice? 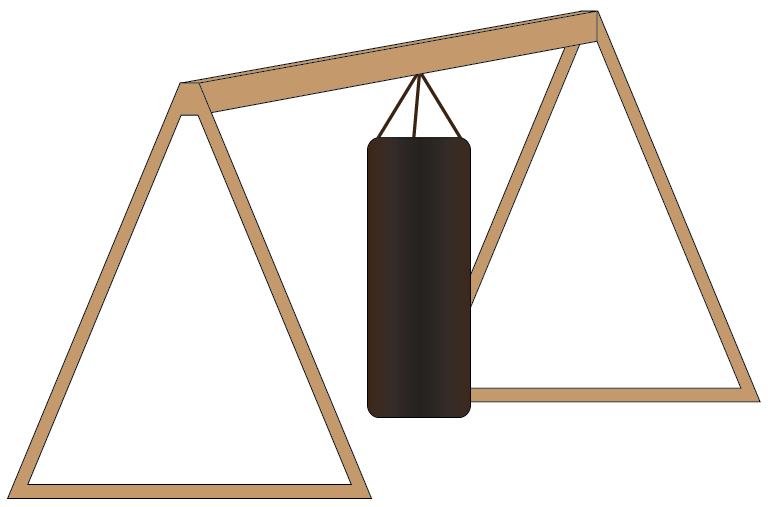 Basically, you're building a swing set for a single swing with a 200lb rider. The difference is that this swing can go a full 360° instead of just back-and-forth.

Treating this as a "shelf" and using the Sagulator, I picked Eastern White Pine as an example of the standard type of "SPF" (spruce, pine, fir) that you're likely going to pick up at the local big box store.

Note: this is for a static load. You're gonna be kicking the tar out of this thing, so it's going to be swinging all over the place. That's going to put significant dynamic load on your "shelf" and will significantly increase the momentary sag and the long term stress on this top bar.

If you adjust your plan to use a 4x6" top bar, I think you'll have a reasonably secure mounting point for your heavy bag.

To support this mounting point (the 4x6"), your triangles are the most stable platform you can design. There is no need for an additional vertical splitting each triangle. You'll probably want to make the diagonals from 4x4 material to resist the dynamic forces you're going to impart. I'd suggest 2 @ 2x4 to connect the bottom of the 4x4s - one on each side to keep them from spreading.

HOWEVER, the one thing still not accounted for is racking forces. Your design will keep this from tipping in the direction of the triangles. There is nothing to prevent it from tipping along the axis of the top bar (one triangle toward the other).

To prevent this, you'll need some diagonal bracing from the top bar to the triangle braces. I'd suggest that on each end, you run one diagonal from the bottom of the 4x6 to the bottom of the triangle on each side. You'd want these diagonals to intersect the top bar at about 1/3 distance (about 25-30" in from each end) and run down to the center of the bottom cross member. Where they intersect the 2x4 at the bottom, I'd put a piece of 4x4 in between as blocking to strengthen and recruit both of the 2x4s to help resist racking.

An afterthought on the diagonal bracing: If you need all the space between the triangles and think that the internal bracing would get in your way, you could build a right-triangle on the outside of each triangle. This would attach at the end of the 8' 4x6 and extend the overall length of the apparatus. I'd use the same 45° angle to extend the triangle outwards, then use some more 2x4 to attach the bottom of this angled piece of 4x4 (one on each side, just like the main triangles) to the center of the 2x4 bracing at the bottom of the other triangles. Connect these using some 2x4 joist hangers.

The structure I designed below seems stable enough on paper...

I would disagree with your appraisal. For clarity I refer to the direction of the triangular base pieces as 'front/back' and the overhead beam as 'side to side'. While the triangles give the structure stability front to back, there is little to no bracing side to side. All the stress of the movement in any direction must be transferred to the ground and it is transferred through the connection of the triangular tops. No matter which way you impact the bag all of the force is transferred to the structure at top pivot point of the bag and this point must be stabilized in all directions.

You mentioned that this is in a carport. If you could cross brace the carport structure it might be possible to simply hang it under the roof.

Not the answer you're looking for? Browse other questions tagged design strength stability or ask your own question.

12
Is there a reference for how much weight a dowel rod can support before breaking?
2
Lightest woods that would be strong & stable for 2 components of DIY Wall Stall bar?
3
self leveling compound for my box
1
How to assemble gear system for adjustable table?
5
How to make bottom for a big drawer?
2
Questions around designing and building an indoor climbing frame
0
How big should you build cabinets?
1
Arm for heavy TV
1
Half-lap joints for day-bed build?
0
Back panels for wide cabinets