What's the polishing method to achieve/maintain this smooth, reflective finishing

I bought this set of 30-year old dining table and chairs from Craigslist, and the owner indicated that they would polish them every year. I was stupid not to follow up with a question about their polishing method. Now a year later, I wanted to do my own due diligence with maintaining the furniture.

See this link under "Never use wax, oil soaps ..." and this link under "Don’t ever wax a wood floor ..." I also found such statements against wax for lacquer furniture finishes. We have little kids in the house that make deep dents / scratches and thus the need to repair quite likely. 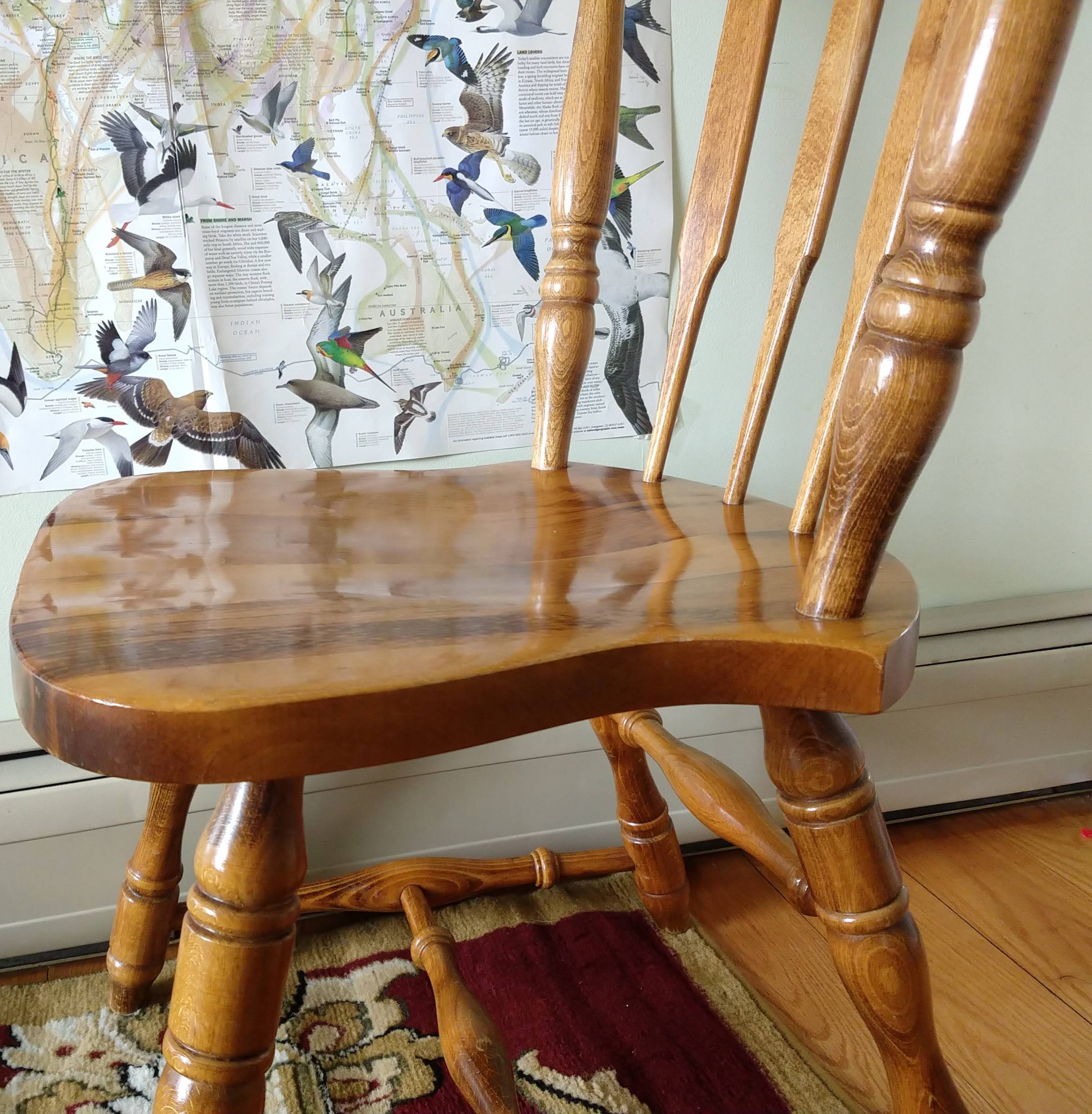 1) I did a little acetone test and the finish dissolves and becomes tacky, so can I conclude that the finish is lacquer?

Possibly. Varnishes also soften in the presence of acetone so it is not a rule in/rule out indicator for lacquer.

2) I went and bought the Howard Feed-N-Wax Wood Polish, but then read that putting wax on finishes (on lacquer furniture or polyurethane flooring) ruins them for good in terms of allowing for future repair / re-coating.

No, that's dead wrong. This is broadly the case with silicone polishes, but absolutely not of things containing wax. Wax at one point was the only, and then the no. 1 thing, used to maintain gloss on furniture. So that's maybe 170+ years of precedent using wax for this.

If attempting a refresh or spot repair you do have to be careful about removing the wax from the surface, but this is both easy and simple to do, just a bit laborious.

So what's the proper polishing approach to maintain this effect?

There isn't just one, because it's likely the previous owners didn't do what 100 other similar owners did to maintain their respective chairs, and there wouldn't have been a heck of a lot to distinguish between them.

Now Howard's is by no means the furniture polish I would have recommended — no matter how popular it seems to have become in the US in recent years :-) — but it's by no means the worst, so I wouldn't lose any sleep about using it now that you have it.

I would have recommended using a wax polish of some kind (wax only, not a blend with oil) as they remain the premier way to maintaining furniture. Once the Howard's is gone a good basic paste wax would be well worth trying, e.g. Johnson's, which has been a mainstay in American homes for a long time.

As a general point the one thing to avoid in furniture polishes is oily ones, and at worst a polish where the entire shiny component is an oil.... which is the case with many thin-textured spray polishes that don't haze over.

We have little kids in the house that make deep dents / scratches and thus the need to repair quite likely.

I'm glad you included this comment because an important titbit to pass on is that spot repairs to dings, scrapes and scratches are difficult to do well and this is generally considered only feasible with shellac and lacquer (traditional solvent lacquer) because these continue to be able to meld with the dried finish on the furniture already.

For varnish though while you can, within reason, use more varnish it is actually quite practical to use a dissimilar finish for some surface repairs, for example wiping on some shellac or shooting a little lacquer from a spraycan.

Not the answer you're looking for? Browse other questions tagged finishing furniture wax or ask your own question.

38
What's the purpose of raising the grain before finishing a furniture piece?
9
Best method to stain the "side" of a project
13
Leveling a finish/finishing the finish
4
Are oils sufficient for the last step of finishing?
6
Why is this yellow colour coming through the finish
2
Stair treads do not look smooth after sanding and finishing
5
Are Oil finishing and Oil polishing complementary?
1
Finishing/Buffing/Polishing Redwood Slab with Oil-based Varnish thinned with Danish Oil
1
What is the purpose of oil in French polishing?
5
What's the best process for sanding/finishing reactive stained oak floor with hardwax oil to leave the best surface?