Is there anything out there that I can attach to the wall with no-damage tape and then drill the mounting screws into that wood instead of the wall?

I'm trying to mount a baby gate but the ends require you to drill the mounts on each end directly into the wall. I was wondering if there was a way to attach a block or something to the wall with no damage tape (like command strips) and then drill the screws into that. I rent and I'm trying to do as little damage as possible. Any tips would be helpful Thanks!

I know it wouldn't be as sturdy, but it's just for a deterrent to keep my dog out of the kitchen.

I thought I'd expand on my Comment as well as provide a direct solution to the your query, although I'm not certain it's the best way to go about this. But it is what you asked and that's what we're set up to provide Answers to, as much as possible.

I was wondering if there was a way to attach a block or something to the wall with no damage tape (like command strips) and then drill the screws into that.

It occurred to me that this could be an another application for a trick used by some woodworkers — tape and superglue.

This is covered in a previous Answer to this Q, How do I temporarily attach two pieces of wood together for machining? but to briefly describe it here, you put masking tape on both surfaces to be joined, burnish it down well (use the bowl of a spoon or the back of a nail if your nails are strong), then apply enough superglue to the tape1, carefully position and press the two pieces together for a handful of seconds and you're done.

I'm reasonably confident this would work for this, because pieces joined this way for other purposes in woodworking (routing, some sawing tasks) can be tested and a very serious attempt to pull the pieces apart won't separate them, as you'll see, yet some levering at the edges can still separate them with surprising ease2.

But I'm not certain this is the way to do this. The reason being that tape applied to paint over long periods has a habit of peeling paint off when it is finally removed (something many will know from their teenaged years with posters on the wall). Since this is a long strip of tape the amount of paint that might be removed isn't inconsiderable and could leave a far larger cosmetic defect than you're trying to avoid.

What I would suggest instead
Just use screws. I know you've asked for a workaround because you're renting but check your lease, you might find one isn't necessary. Many rental agreements do allow for picture hanging and other simple things that require drilling into the wall, with the expectation that they'll be dealt with along with other touchups to paint here and there (due to normal wear and tear) before the next tenant moves in.

Screws only leave small neat holes in the plasterboard that are easily patched with a little spackle and after a lick of paint the repair can be practically invisible, even higher up on a wall where people do tend to look. Who scrutinises walls down around their knees inside a door opening?

1 You don't want to use so much glue that it risks squeezing out at the edges, but don't skimp on it either. A single wiggly bead up the centre, or drops applied in a zigzag manner along the length of the tape is usually about right.

2 Because you'll be levering against a wall you'll want to protect that from the screwdriver or table knife you're using to lever. One of the best ways to do this is using another woodworking tip, by interjecting a putty knife or something similar so you're levering against the steel surface and not directly against the plaster, this is the only related pic I could find just now but you get the idea.

I've had good results using 3M Command Strips to attach wood to painted drywall.
The Command strips remove completely without damaging the wall.
Below is a rough drawing. 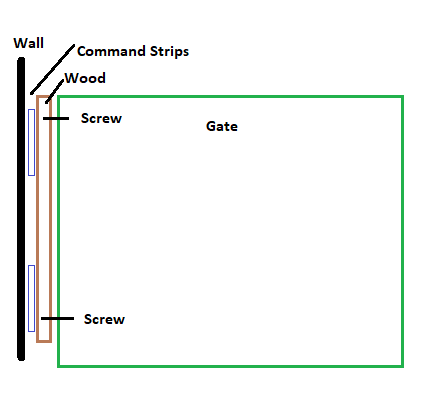 You would have to look at your application to determine the right size wood (2x4? 2x2?) how many Command Strips and if the should be attached the vertically or horizontally.

I don't work for 3M and don't mean to do product recommendation - it's just my experience.

You have a good approach to your restrictions. One could use a simple 1x4 from the big-box store as the intermediate block.

The no-damage tape strips will hold stronger with a smooth surface. It's likely your building surface is painted and smooth enough. Consider to purchase some fine grit sandpaper (320 or so) to further smooth the 1x4 and/or paint the block to provide a smooth surface on the wood facing the wall/door frame.

Allow the paint to dry thoroughly, perhaps multiple days, to ensure that the paint will not release to the tapes.

An alternative to painting would be to use a laminated board such as those found in the shelf departments. The top surface is often called melamine and is smooth enough to provide a good grip for the tapes. On the downside, though, the material is usually particle board and doesn't hold screws as well as one might prefer.

Not the answer you're looking for? Browse other questions tagged wood holes mounting foreign-object or ask your own question.

9
How do I temporarily attach two pieces of wood together for machining?
2
How to I stop Ikea SÄLJAN ADILS desk from wobbling?

3
Shelves inside cupboard, how to attach to legs?