Is it possible to use a mortiser bit without a mortiser?

My project requires about 60 precise square holes, 14mm on a side. I don't have a mortiser but a mortiser bit is fairly inexpensive. Is there a way I could use that bit by hand to cut those holes? Maybe if I drill a circular hole first then alternate between tapping the square cutter with a mallet and rotating the drill to remove waste? Alternatively, is there another way to rapidly cut precise square holes?

Is there a way I could use that bit by hand to cut those holes?

I think the real answer to this is yes, because that's exactly what some craftsmen having been doing for quite a while.

"The accepted method for this has been to drill a round hole and use the chisel from a hollow chisel mortiser (hand held) to square up the holes. This has worked to some degree, but with limitations."

It's not quite as straightforward as extracting the drill bit from the hollow chisel and using the latter by hand with a hammer or mallet, but that is what they were doing in a nutshell. Undoubtedly a few are still doing this despite the availability now of an alternative — a square chisel or hollow square punch as it might be called, which was purpose-designed for this job by the above craftsman: 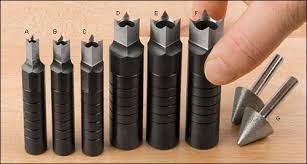 However these don't appear to be available in metric sizes, and none of the Imperial sizes seem to me to be close enough (1/2" being only 12.7mm) to be useful to you. So I think your first idea is the most viable for you. As I say above in a Comment, a little honing may be required to get one of these as sharp as you need it to be.

This YouTube video was posted only yesterday on the Wood magazine channel, How To Make Square Mortises For Faux Tenons showing the use of the Lee Valley punches but many of the tips would be equally useful in helping to achieving good, consistent results using the hollow mortise chisel (as well as the other tools suggested below).

Obviously doing this sort of chopping out completely manually is always an option, and for just a few on a single project this probably makes the most sense. But I wanted to include some other alternatives for speeding up the process for future searchers. 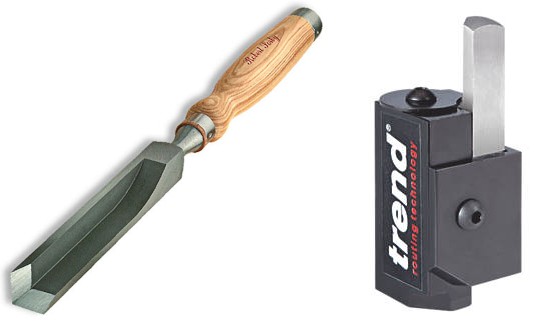 Homemade square chisel
This may sound out there but it's not actually outside the scope of similar toolmaking operations that woodworkers undertake now and then as the need arises1.

In this case you'd start with a suitable size of square steel tubing, then grind, sand or file the curvature into the leading edges, then grind the interior bevel using a conical grinder of some kind followed by final honing as needed. The curvature of the cutting edges doesn't have to be as pronounced as on the commercial tools, and if the tool will be used as-is (without any hardening processes2) it would be better to leave the corners less pronounced anyway as otherwise they'd be prone to bending over or breaking off. Do expect to have to re-hone frequently if working with harder material.

1 One of the most common IME being homemade versions of these created from various types of round steel tubing, including stainless.

2 If the tubing is mild steel it could be made hardenable using case hardening techniques, after which it could be hardened and tempered, then honed to final sharpness.

No not really, in my opinion. From using a mortiser I know that you need an immense amount of pressure (gained through leverage, or in the case of our second mortiser we bought, compressed air power) to get through with a mortise chisel, and that's with the centre drill running. I calculated previously that I was applying several hundred kilos of downward force on my mortiser chisel, by hanging off of the end of the lever, and even then in harder woods like oak it would often get stuck.

If you were doing square holes in very thin wood (like, 5-10mm) you could probably hammer it through, but to get deeper than that you're really going to struggle with the combined friction of all 4 sides of the chisel.

It strikes me as something you may be able to get to work with a lot of sweat and swearing, but suspect that you'll actually have an easier time drilling holes on a drill press and squaring them out manually with a regular chisel.

Not the answer you're looking for? Browse other questions tagged hand-tools square or ask your own question.

7
Is it OK to re-use an old iron wedge when handling an axe?
16
Planing thin stock without the aid of bench dogs
20
How can you make a square without a square?
3
What's the name of this tool/bit with a triangular tip?
4
Should I use aluminum and copper to make woodworking tools?
5
How can a bit brace handle be replaced?
2
Resources for wooden furniture projects without glue, nails or screws
2
How to saw wood without the final splitting?
8
Angled cuts without miter saw or miter box?
0
How to cut long angled cuts without a table saw?