How can I secure a depth stop on a mitre saw

I have a Metabo double tilt sliding mitre saw with a depth stop. I've been using the depth stop on the saw and a hand chisel to create lap joints. Although this has not been very successful as the depth stop loosens with each cut leading to poor results. The stop itself is just a bolt and a nut, is there an easy way to lock it into place and stop it shifting so easily?

My Kobalt saw is the same configuration as yours and I suspect the depth stop is identical in form and function. The purpose of the bolt and nut is to allow you to set the desired depth with the bolt, then tighten the nut against the body of the saw. This is effectively called a jam-nut and is often used for securing two nuts on a bolt, tightening each against the other.

If you are properly tightening the nut to the saw body and it is coming loose, there's something else amiss, perhaps incorrect threads on one of the components.

If you've not been securing the nut to the saw body, this will resolve the difficulty.

Alternatively or additionally, one could apply blue threadlocker to the threads where the nut and bolt engage each other and where the bolt engages the saw body. This will eventually set up and require some force to release, but it will release. This will also allow you to continue to make adjustments over time if required.

When the threadlocker wears out, it's simple to clean away the old material and apply new for continued performance.

DO NOT USE RED THREADLOCKER. Releasing red requires application of heat and may destroy or otherwise damage components of the saw. 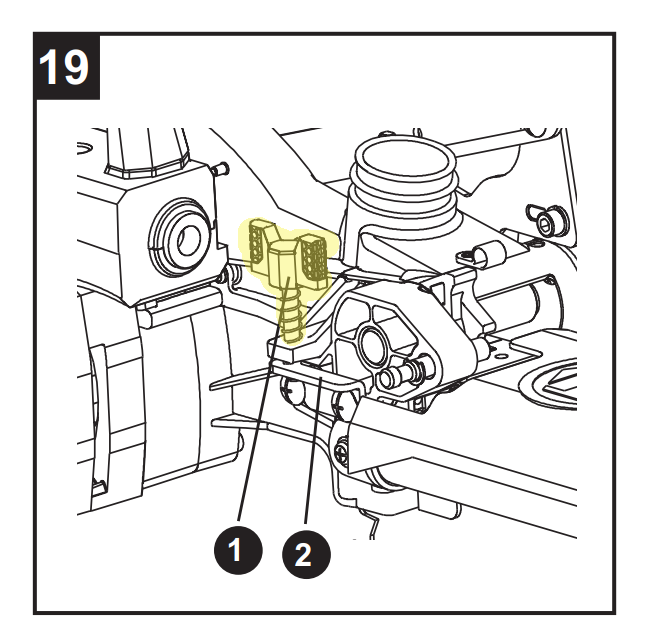 The depth stop in the image above, highlighted, shows a spring tensioner on the bolt, to keep the adjustment knob from turning. This model would also benefit from application of threadlocker, as the spring isn't always effective.

Not the answer you're looking for? Browse other questions tagged joinery power-tools miter-saw miter-joint or ask your own question.

12
How to sharpen a circular saw or mitre saw blade
10
Does circular saw diameter bear on anything but maximum cut depth?
17
What am I doing wrong when making lap joints with my stacked dado set?
14
How to cut the centre out of a large round of wood
12
Quick corner joints in practice
3
How to secure these 2 stair handrails together.
5
Can I cut an acute angle, mid-stock with a mitre saw?
2
Reusable Desk design: how to join pieces?
0
What does "Depth Control = No" on a table saw mean?
5
How to secure bench top equipment to a mobile surface