Can this end-grain cutting board be saved?

I bought this 15x20x4" maple board for my husband to hack up meat & bones for our dogs.

It's been on the granite counter, near our Berkey (water filter), except for cleaning. When I filled the filter Saturday, I noticed some water at its base. During clean-up, I found a 2 oz puddle under the board. I wiped it up, and this is what I found the next morning. (The photo is of the "top", though it's reversible.)

I was wondering if there was some way it could be fixed, or maybe taken apart and re-glued as a smaller board?

I'd really appreciate any advice. 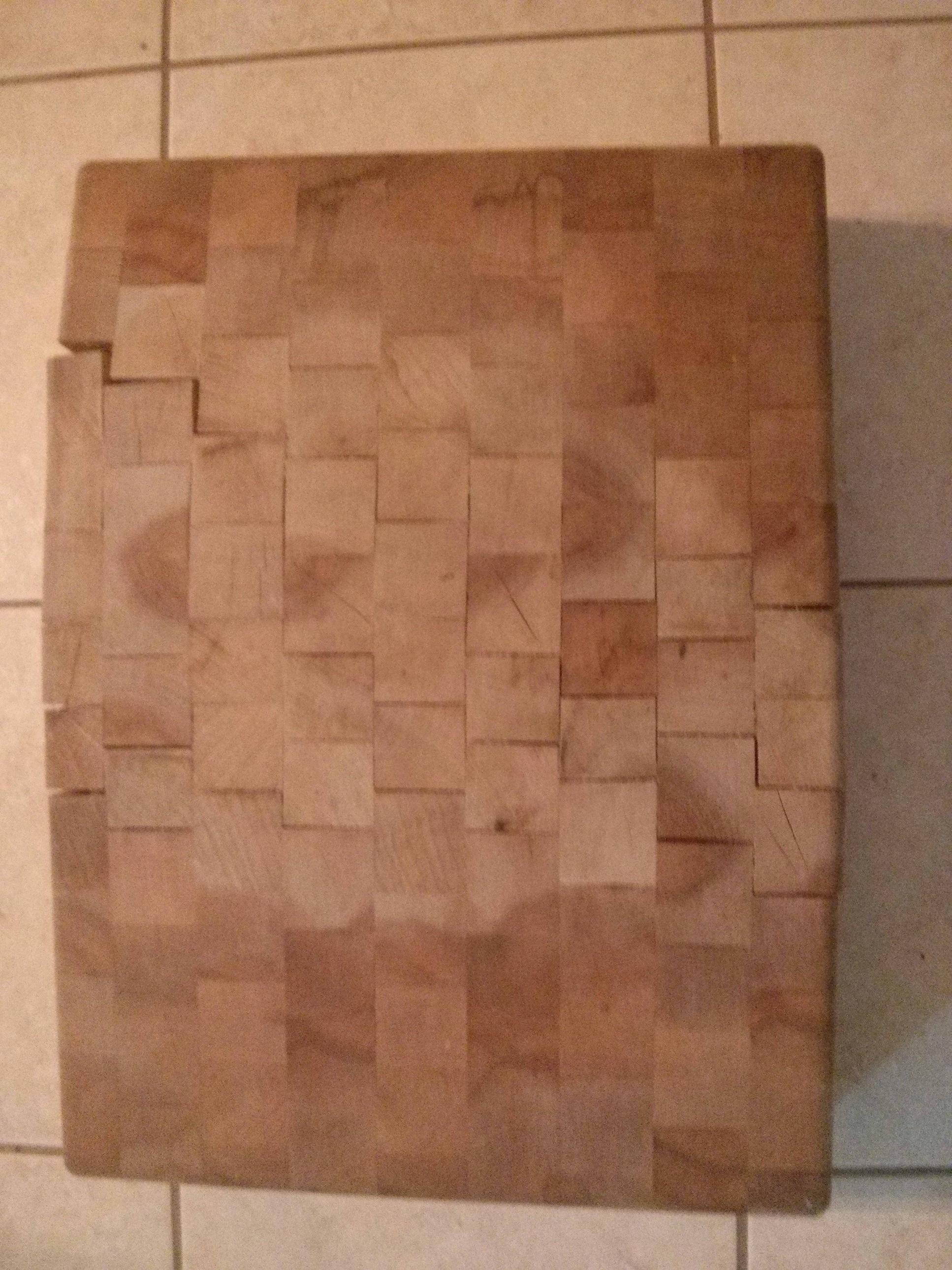 I bet this was a shock, goes to show the power of expanding wood!

I think strictly speaking the answer to the question in the title is yes but it's likely beyond the scope of what a non-woodworker can accomplish so best to consider it a gonner. A replacement would be far less hassle, and assuming you don't own some of the requisite tools actually much cheaper, even with the high retail cost of boards of this type.

I'll briefly summarise what I think would be needed to properly 'repair' this, I use quotes because as you'll read this is actually a complete rebuild. It would need to be sawn apart, back to individual blocks, and every mating surface cleaned up. Then re-glued and clamped (very hard, from all directions, so lots of clamps, and good ones). Lastly one or both faces cleaned up which these days would generally be accomplished by lots of power sanding. The board would end up smaller in all dimensions, losing the most in its length, although if everything is done right it would be good as new..... actually better, see next point.

Something for you and future readers to notice, see how the block came apart pretty much exclusively along glue lines? This is a sure sign it wasn't glued together as well as it could have been (geek points for woodworkers in footnote 1). If it had been glued together properly it would still have failed, but pretty much or (hopefully) entirely ignoring the glue lines and just cracking randomly. This is because glue lines should be stronger than the wood.

If this happens again to a future board
If you choose to get another end-grain board, of any quality — no matter how good its supposed to be, no matter how expensive it was, no matter what wood(s) it's made from — and it gets wet in the same way the same thing could happen.

If the underside of a board of this construction gets wet and you notice it in time (i.e. before it cracks) get the entire thing evenly wet, if necessary by soaking briefly in the bath. Then towel it off and let it dry on edge. Do not make any attempt to speed drying, just let it dry off at its own pace.

With a bit of luck it will dry out uniformly and stay (reasonably) flat, but no guarantees you won't get some slight warping. If you do, just get used to using the board on top of a dry folded tea towel. It may flatten further over time as water slowly comes out of the interior, keep your fingers crossed but best not to count on it.

This is incidentally one reason, of many, I'm not a fan of cutting boards of this construction except from an aesthetic standpoint. They can look awesome. But long-grain boards need less fussing, require basically zero upkeep other than cleaning2 and ultimately can be far more long-lived. A decent long-grain board could still be in use 30 years after it was made or bought, having shrugged off many incidents such as this. And they cost less, potentially a lot less since a chunk of a 2x12" (preferably without knots but this isn't essential) could make a perfectly reasonable heavy-duty cutting board.

1 Any of or some combination of the following: inferior glue, glue that has lost its effectiveness (too old, maybe got too hot or froze), not enough glue was used (one of the chief causes of starved joints), after glue was applied the pieces weren't brought together and clamped up fast enough, the wood was left too long after cutting before glueing, insufficient clamp pressure (PVAs require lots of pressure to form the strongest joints).

2 None of that oiling, waxing, "cutting board finish" or "board butter" malarkey.

Not the answer you're looking for? Browse other questions tagged wood-repair end-grain cutting-board or ask your own question.