I just recently purchased an old, 1945 era, cast iron craftsman table saw off Craigslist for $25 with the intent to clean it up and restore it. You get what you pay for and it’s heavily rusted. I’ve been reading all over the internet about different methods for removing rust (elbow grease, scotch pads, vinegar, electrolysis, etc) and to do a thorough job I think they’ll all require dismantling everything down to the bone first. Hoping to skip that dismantling step I was wondering if it would be a good idea to submerge the entire machine in electrolysis to remove it in one fell swoop. Worth pointing out the motor/anything electrical is separate and wouldn’t be submerged.

Any reason I shouldn’t? Any bearings/etc that would be damaged by it? Other reasons you can think of?

Similar question: would it be safe to submerge it all in similar derusting solutions (vinegar, etc)

Hoping to skip that dismantling step

Let me dash that hope first (sorry!) you're going to need to do some dismantling.

You have to do some, and to do a really thorough job you have to take it down to individual pieces. Not doing this (with anything, even something as mechanically simple as a hand plane) is doing a half-assed job of it.

The reason you need to do at least some disassembly is that all rust-removal processes require access to the rust. And nothing can magically reach inside the gap between a nut and its bolt, or any screws and the threaded holes they go into1. Two pieces that only press together tightly can be treated for days or weeks and have the rust between them be completely unaffected.

So to do this properly you need to separate things.

I was wondering if it would be a good idea to submerge the entire machine in electrolysis to remove it in one fell swoop.

No. It won't work, at least not the way you're visualising.

Apart from certain technical difficulties trying to do this on something of this mass, electrolysis has a certain line-of-sight effect between the part and the sacrificial electrode(s). While this problem can be exaggerated by detractors of the method it is undeniably a factor, and it means that internal surfaces, hollows and of course the small gaps I mention above will get little or no rust removal while the externals get clean.

What to do instead?
For something of this size I suggest a molasses bath as a cheap, safe (for you and the rusty object) and effective alternative. Here's how effective: 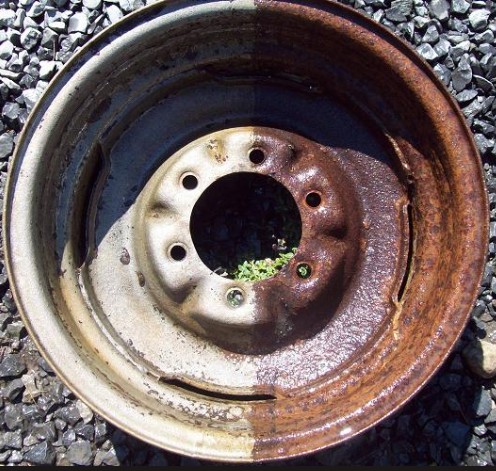 For large-scale rust removal like this molasses solutions are hard to beat in terms of cost effectiveness. Other than the smell2 the only real downside to this method that I've seen is in the speed. It's slow. But why be in a rush?

1 If there even is one! Bad rust tends to have closed this gap, which is precisely why rusted bolts and screws are so hard to unscrew (even when they go into wood, where there's no "rust weld" effect).

2 Some people don't mind it so much but it is strong and if you don't care for it will be a little off-putting. But you don't have to be around it much because as soon as the thing is fished out of the solution you'll be moving it to one side and hosing it off.

If the blade tilt and elevation work or can be freed, cleaning the top with fine (220 or so) and random orbit sander, I worked well on mine. I really do not know if it would damage the bearings probably not good for them but??? you would defiantly have tore lube the threads on the tilt and elevator shafts. I am assuming that it is a "100" series they are a fine saw the rip fence is not good. I have 2 100 series saw and use it to do fine woodworking motor upgraded to a 2 hp new rip fence and miter gauge, The bearings may have to be replaced not hard just a little tedious. It beats any new saw you can buy for $800 or less.

Not the answer you're looking for? Browse other questions tagged table-saw rust or ask your own question.