The tabletop material would be something like this (at 1"x20"x4', and the frame/legs will be made out of cedar 2x4s.

The reason I'm hesitant to go to something that would allow for expansion and contraction is my worry that it would allow the tabletop to move if bumped or when the table was moved, along with the added complexity and some limitations with tool availability.

I'd love to hear about suggestions for the best course of action from all of you, and if you have other things I may want to take into account I'd love to hear them as well.

I think the simple answer to this among professional builders would be, the same method I always use. Within reasonable limits smaller or larger doesn't change how they approach attaching a solid-wood tabletop to an apron or other understructure, they do what they always do because it's the safest approach.

And 20" is wide enough that you do have to give a thought to movement, unless the local conditions are unusually stable which you indicate they won't be. Even if you were using quarter-sawn material1 it might be wise not to screw directly to the leg assembly.

Well think about whether this seems to be a problem with all the tables where the top is attached that way. It's not, so it won't be on your table either.

With the most traditional tabletop fastening method, hardwood buttons, there's sufficient friction between the buttons (typically only four on a small table but could be as few as two) that the tabletop simply can't be moved by hand, or by a bump from a hip. If it could be the screws fastening the buttons aren't tightened!

And it's the same story with any of the modern metal substitutes for buttons.

along with the added complexity and some limitations with tool availability

To be fair buttons aren't something everyone is set up to do easily. However, virtually any woodworker can make and install them with even the most basic hand tools2, it just takes a bit longer. Make the buttons in a production line, drill/countersink the holes, do all the grooves or pockets one after another and you'd be done before you know it.

With arguably the best of the metal substitutes for buttons tool availability pretty much stops being any issue as they are surface mounted, they simply screw in place3.

1 Which has a much lower coefficient of expansion, roughly half for many species.

3 So at most you need a drill with a small bit (or a bradawl) for pilot holes and one screwdriver.

Here is a photo of the underneath of a lamp table that I made. It shows how the fasteners are used to fasten the table top to the legs framework while still allowing movement. Take note of the groove cut into the rails which are positioned such that screwing the fastener applies pressure to keep the top attached firmly. The top is Padauk and the base is Maple. 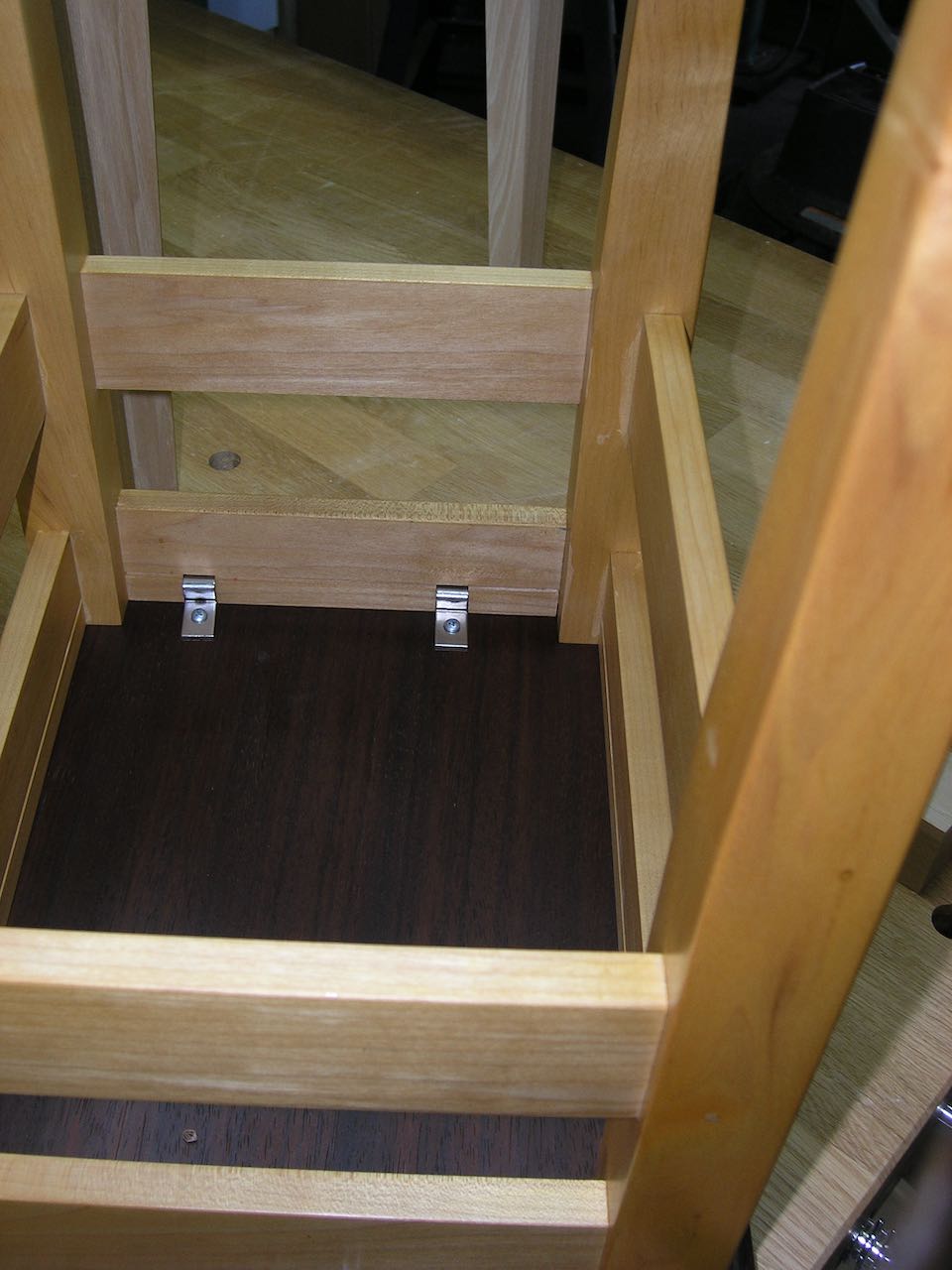 Not the answer you're looking for? Browse other questions tagged tabletop table-making mounting or ask your own question.

6
Table top attachment with aprons on only two sides

8
Do pocket hole screws allow for proper expansion and contraction in planked table tops?
3
Is this a sufficient attachment method for a tabletop?
5
Do I need to worry about expansion and shrinkage for my table top with wood joined at 45 degree angles?
4
Designing and Building a Through-Leg Table
4
Caster/slide for tabletop tray
5
Repair / Restore Veneer Covered Table
6
Table top attachment with aprons on only two sides
1
Non-permanent side-by-side assembly of boards