How to get straight cuts with a scroll saw?

I have a cheap electric scroll saw, one of those Scheppach for ~ 100 EUR. While they are not the best build quality, some people on youtube apparently are happy enough with it and manage to get the results they desire.

The manual says it can cut not too hard wood up to 25mm thickness. I mainly bought it as I thought finer cuts (vs. electric jigsaw or hand-held circular saw) would translate to more precision, for things like "simple" finger joints, or cutting pars for smaller wooden cases such as for DIY loudspeaker enclosures and what have you.

I was unable to get anywhere near a straight cut. More of a irregularly modulated sine curve with weak amplitude, but not weak enough... The blade seems reasonably tensioned and I don't think the machine warrants more tension, but still, the blade bends (torsion) rather easily, making the process rather wobbly. Also when I saw I was leaving the drawn line, the only thing that seemed to help to get back onto it was not just trying to correct the angle, but also actually moving the workpiece's cutting line out of the virtual vertical line between the two mounting pins of the blade, i.e. actively bending the blade, which is obviously curving the cut in the sideways dimension, and probably not good for the machine & blade.

I have watched a couple videos of people demoing that cheap saw, but I was not able to replicate their results.

What am I probably doing wrong?

As suggested in the comments, it is going to be a challenge to do any repeatable joinery cuts with a scroll saw. Regardless of what you see on the internet, even the best-tuned scroll saw will have a fair amount of wobble and vibration at speed. And as soon as you start pushing material, it is going to want to wander. As @Graphus mentioned, even a band saw with a fence is not going to make for great joinery cuts!

(It occurs to me that I know some folks will use a coping saw to clean up dovetails. This is sort of similar but the control you have with a hand coping saw is miles from a scroll saw even though the mechanics of the cutting is similar. Anyway, whenever I hear about that I always think "why not use a nice sharp chisel?")

So, you could research how to tune your saw for the best straight line cutting, but it might be a bit of a fool's errand.

Finger joints are really a product of mechanized woodworking. They really shine when you have to make production amounts of joints (often with relatively cheap material), and you don't necessarily want to hire or train someone with skill in joinery. A table saw and a jig is all you need. But it is a compromise; finger joints are never as strong as dovetails or other joinery (though often strong enough with modern glues).

My recommendation would be to invest in a table saw or even a router (if you want to make a lot of finger joints and really get into mechanized woodworking). Obviously, this is a lot of overhead if you just want to mess about a bit in your shop.

Or, change tack a little and switch to traditional dovetail joinery using hand tools. You only need a few simple tools easily found online or in your local big box store.

If you insist on using a scroll saw you might want to look into making a jig or fence of some kind. And a common technique for fingers is to cut the joints for mating pieces at the same time, just offset by a single finger and flipped. This way, depending on the nature of the errors, at least the errors tend to match.

I will add that, further to my comment about coping saws higher up, I suppose you could try to use your scroll saw in one particular similar manner. There is a technique where dovetails or bridle mortises are roughed out with a coping saw. One starts at the mark on the end and, instead of trying to follow the mark perfectly, slices into the waste until you reach the bottom mark. Repeat for the other side of the mortise. Then clean up with a chisel.

This allows you to rough out the waste pretty quickly, but you still have the chance to make nice tight joinery. The idea is that you use the copying saw to do what it does best: make curved cuts. 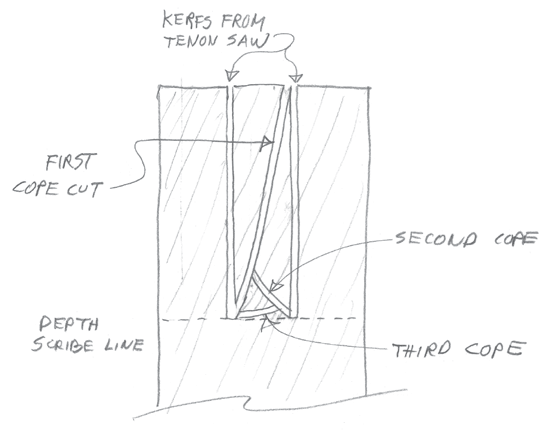 Not the answer you're looking for? Browse other questions tagged scroll-saw or ask your own question.

3
Use planer to even out edge sawn with scroll saw?
0
Trouble with sharp turns on scroll saw. Is my problem technique or equipment?